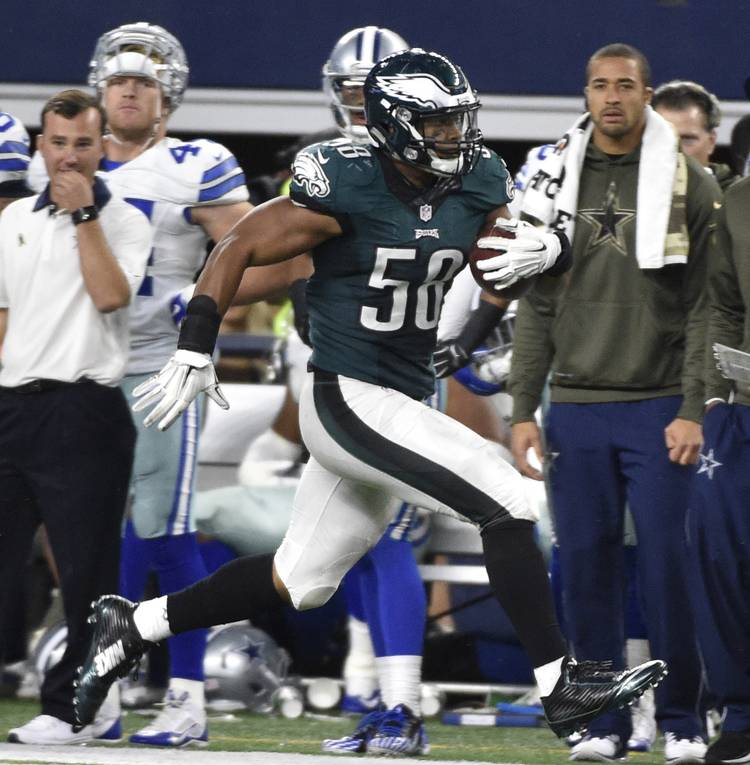 Jordan Hicks had an interception return for a touchdown on Sunday night, but he later tore his pectoral muscle, ending his great rookie season. (AP Photo/Michael Ainsworth)

Is there such a thing as a former Longhorn? These players will always be Longhorns to University of Texas fans, even though they’ve graduated to the next level of football. Every Tuesday, we’ll update you on how they performed the previous weekend. Here’s a look at the Longhorns in the NFL and how they fared in Week 9.

Jordan Hicks, Eagles linebacker—Hicks continued to impress in his bid for defensive rookie of the year as he made seven tackles and had an interception return for a touchdown, his first in the NFL, in the Eagles’ big Sunday Night Football win over the Cowboys. Unfortunately, that bid has ended as he’s been placed on IR for a torn pectoral muscle. Hicks finished his season with 50 tackles. He also had a sack, two interceptions, a forced fumble and three fumble recoveries. Here’s his highlight of the season.

Matt Cassel thought he had Darren McFadden open by the sideline.
Jordan Hicks had other ideas.
PICK SIX! #PHIvsDAL https://t.co/OaHWp7DfjK

Keenan Robinson, Redskins linebacker—Robinson is second on his team in tackles, behind Dashon Goldson, with 56. He had seven tackles and a pass defended against the Patriots on Sunday.

Phil Dawson, 49ers kicker—Dawson connected on his only field goal, a 44-yarder, in Sunday’s 17-16 win over the Falcons. He was two-for-two on extra points.

Kenny Vaccaro, Saints safety—He was tied for the team lead in tackles in the Saints surprising 34-28 loss to the Titans on Sunday. He had 10 tackles.

Michael Griffin, Titans safety—Griffin came out on top in a battle between Longhorn safeties as his team took the victory over Vaccaro’s Saints. Griffin did his part, leading the team in total tackles with 8.

Sam Acho, Bears linebacker—The 27-year-old had three tackles in a nice comeback win over the Chargers on Monday night. He has 24 tackles on the year.

Brian Robison, Vikings defensive end—Robison had five tackles and two for loss in the Vikings narrow 21-18 win over the Rams. He also hit the quarterback once.

Tony Hills, Saints offensive tackle—Hills didn’t get any playing time as a backup tackle on Sunday.

Geoff Swaim, Cowboys tight end—The Cowboys opted for James Hanna as they fell to the Eagles. Swaim hasn’t played since Oct. 11 against the Patriots.

Jackson Jeffcoat, Redskins linebacker—In an odd twist, Jeffcoat, who hadn’t been listed on any injury report last week was placed on Washington’s IR before Sunday’s game. His thigh is listed as the reason for his move to the IR.

Colt McCoy, Redskins quarterback—Backed up Kirk Cousins in the Redskins’ loss to the Patriots.

Roy Miller, Jaguars defensive tackle—Failed to log a stat in the Jaguars’ 28-23 loss to the Jets.

Golden: Will the Horns make it to a bowl game this year?

Postcards from China: Yes, cutting lines is apparently a thing