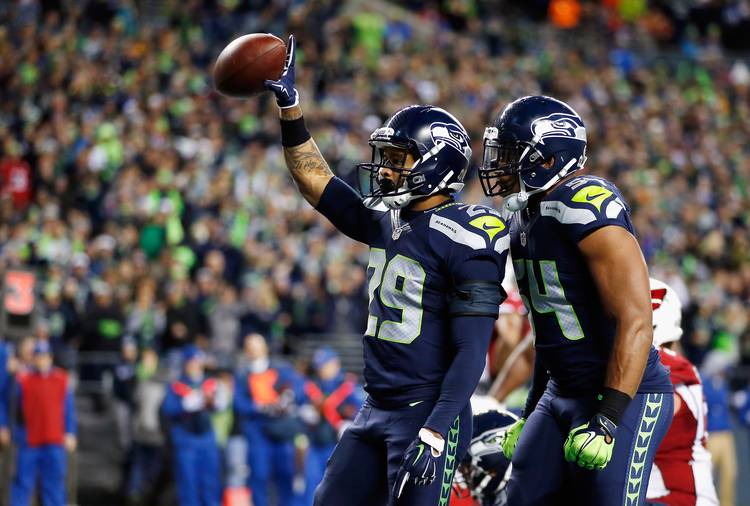 Earl Thomas mad an interception during the first quarter against the Arizona Cardinals, but Seattle eventually fell. (Photo by Otto Greule Jr/Getty Images)

Is there such a thing as a former Longhorn? These players will always be Longhorns to University of Texas fans, even though they’ve graduated to the next level of football. Every Tuesday, we’ll update you on how they performed the previous weekend. Here’s a look at the Longhorns in the NFL and how they fared in Week 10.

Malcom Brown, Patriots defensive tackle—He had his best game as a rookie, registering seven tackles and a sack in his fourth straight start. His Patriots remained undefeated in the 27-26 win over the Giants.

Derrick Johnson, Chiefs linebacker—He led his team in tackles with seven and added a tackle for loss and a sack in the Chiefs’ 29-13 win over the Broncos. He led the defensive effort to force five interceptions on the day. He leads the Chiefs in tackles with 50. He also has three sacks and an interception on the season.

Earl Thomas, Seahawks safety—Thomas had an early interception, five tackles and a pass breakup, but his Seahawks still lost to the Cardinals. Here’s the interception.

Throwing TD's on the Seahawks would be so much easier if that Earl Thomas guy wasn't around. #AZvsSEA https://t.co/yncTZOwy9L

Brian Orakpo, Titans linebacker—He had another strong game, picking up six tackles, a tackle for loss and a sack. He has five sacks in his last five games, six on the year.

Fozzy Whittaker, Panthers running back—He didn’t get a rush or a reception, but he played special teams, had two tackles and a kickoff return for 22 yards.

Henry Melton, Buccaneers defensive tackle—Melton had one quarterback hit but didn’t register a tackle in the Bucs 10-6 win over the Cowboys.

Sam Acho, Bears linebacker—The fifth-year linebacker had two tackles and two quarterback hits in the Bears’ 37-13 win over the Rams.

Kenny Vaccaro, Saints safety—He had five tackles in the loss to Washington. He’s second on the team with 64 total tackles and he’ll have to keep playing well with a new coordinator coming into the fold.

Brian Robison, Vikings defensive end—He had one tackle and knocked a pass down in the Vikings big win over the Raiders.

Lamarr Houston, Bears linebacker—He had two tackles and his fourth sack of the year against the Rams.

Colt McCoy, Redskins quarterback—Something drastic would have to happen for McCoy to get on the field with how well Kirk Cousins is playing.

Roy Miller, Jaguars defensive tackle—He had one of his best games of the year, making four tackles in the 22-20 win over the Ravens.

Lyle Sendlein, Cardinals center—He anchored the offensive line in a big win over the Seahawks. The Cardinals rushed for 117 yards and Carson Palmer had enough protection to throw for 363 yards and three touchdowns.

Quandre Diggs, Lions cornerback—Diggs registered two tackles and a pass breakup in the Lions surprising win over the Packers. He’s got 13 total tackles and two passes defended for the season.

Justin Tucker, Ravens kicker—He made both his extra point attempts, but he missed a field goal in a game which his team lost by two points. You can’t really blame him, though, it was from 58 yards at the end of the first half.

Alex Okafor, Cardinals linebacker—Coming back from a calf injury he had one tackle in the Cardinals 39-32 win over Seattle on Sunday night.

Cory Redding, Cardinals defensive end—He played in the Sunday Night Football game but failed to log a stat for the Cards D.

Keenan Robinson, Redskins linebacker—Robinson sat out Sunday’s game because of a stinger. He has 56 tackles, an interception and a pass breakup this season.

Tony Hills, Saints offensive tackle—He didn’t make it into the game on Sunday as a backup.

Jordan Hicks, Eagles linebacker—His season ended and he’s on IR for a torn pectoral muscle. He finished his rookie season with 50 tackles, a sack, two interceptions, a forced fumble and three fumble recoveries.

Bohls: Have the freshmen hit a wall in their first college season?