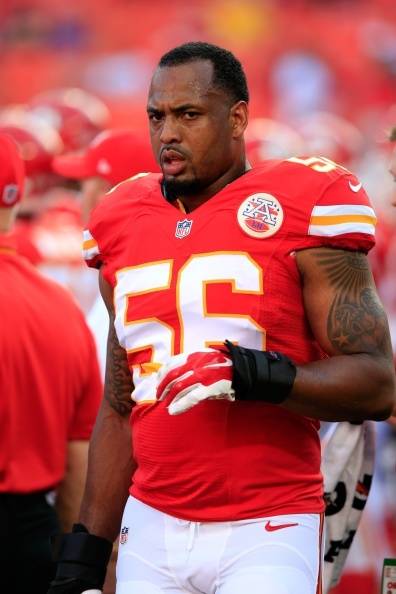 Linebacker Derrick Johnson #56 of the Kansas City Chiefs warms up prior to the start of the preseason game against the Minnesota Vikings at Arrowhead Stadium on August 23, 2014 in Kansas City, Missouri. (Photo by Jamie Squire/Getty Images)

Derrick Johnson, one of the best defenders ever to play for the Texas Longhorns, is being honored by the NFL for his sportsmanship.

Johnson was selected by the Kansas City Chiefs as its nominee for the Art Rooney Sportsmanship Award. The award is in its second year of existence and is presented to the NFL player “who best demonstrates the qualities of on-field sportsmanship, including fair play, respect for the game and opponents, and integrity in competition.”

The award is named for the late  owner of the Pittsburgh Steelers.

Johnson was a first-round draft pick of Kansas City in 2005.

At Texas, he won the 2004 Butkus Award given to the nation’s top linebacker. and earned unanimous All-American honors. He also was the 2004 Big 12 defensive player of the year. In 2003, Johnson was a consensus All-American.

A panel of former NFL players, including Curtis Martin and Warrick Dunn, will trim the list to eight finalists, four from the AFC and four from the NFC. All current players then will vote on the award.