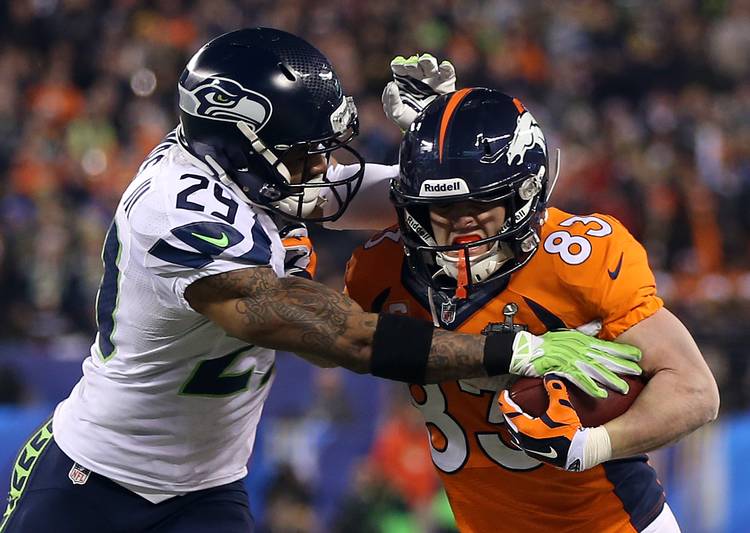 Earl Thomas was a big part of the reason the Seattle Seahawks dominated the Broncos in Super Bowl XLVIII. (Photo by Jeff Gross/Getty Images)

We’ve chronicled all of the Longhorns who have made the Super Bowl over the past 50 years. But did you know that over the last 11 seasons at least one Texas Longhorn has been on a Super Bowl roster? This season, Fozzy Whittaker will be the lone representative as he serves as a back up running back to Jonathan Stewart for the NFC Champion Carolina Panthers. Here’s a look at Whittaker’s outlook and a recap of how the previous Longhorns in the Super Bowl performed.

Fozzy Whittaker, Panthers running back: Whittaker ran the ball just 25 times for 108 yards and a touchdown this year. He also had 12 receptions for 64 yards and nine kickoff returns for 209 yards. The Super Bowl is known for featuring surprise performances from some of its participants. Will Whittaker become a household name by the end of the game?

Earl Thomas, Seahawks safety: Recently named the best Longhorn in the NFL by American-Statesman staff writer Kevin Lyttle, Thomas fell short in the 2015-2016 season, but prior to this year he’d already played in two Super Bowls. The Seahawks came up one bad play call short of winning it all for the second year in a row in Super Bowl XLIX. Thomas had nine tackles in the game but had to watch helplessly from the sideline as the Seahawks turned the ball over on their potential game-winning drive with 20 seconds left to play.

Earl Thomas, Seahawks safety: Thomas won his first Super Bowl in his fourth year with Seattle. He led the team in tackles with seven as the Seahawks just steamrolled the Broncos 43-8 in one of the most surprisingly lopsided Super Bowls in recent memory.

Michael Huff, Broncos safety: He didn’t play in the big game and he didn’t even start the season with the Broncos. He came over from the Ravens after seven games. He registered a single tackle in the postseason.

Quentin Jammer, Broncos cornerback: Jammer finally made it to the Super Bowl in the final season of his career, though he didn’t get any playing time in the blowout loss.

Justin Tucker, Ravens kicker: Tucker proved to be the difference as he accounted for ten points, going 4 for 4 on extra points and connecting on both of his field goal attempts in the Ravens’ 34-31 win over the 49ers. Tucker’s 38-yard field goal with 4:19 remaining allowed the Ravens to hold on to the win.

Chykie Brown, Ravens cornerback:  Brown got some playing time but didn’t register a stat in Super Bowl as a second-year player.

Tarell Brown, 49ers cornerback: He had three tackles and forced a fumble by Ray Rice which he recovered to set up a field goal to cut the lead to 28-23 in the third quarter.

Leonard Davis, 49ers guard: Davis didn’t start but he finally made the Super Bowl in the last season of his career after 12 years.

Aaron Ross, Giants cornerback: Ross had three tackles as the Giants once again denied the Patriots in the big game 21-17. The Giants’ secondary held Tom Brady to 276 yards and an interception.

Kyle Hix, Patriots offensive lineman: Hix was signed with the Patriots as a rookie free agent and spent the entire season on injured reserve with a shoulder problem.

Casey Hampton, Steelers defensive tackle:  Hampton started and had a tackle in the game, but his team failed to get the win for his third career Super Bowl championship.

Jonathan Scott, Steelers offensive tackle: Scott started the game at left tackle and protected Ben Roethlisberger well enough for him to throw for 263 yards and two touchdowns. As a team the Steelers rushed for 126 yards and a touchdown.

Tony Hills, Steelers offensive tackle: Hills got some playing time though he didn’t start in the loss.

Jermichael Finley, Packers tight end: He never made it to the game as he injured his right knee in Week 5, but his Packers won 31-25.

Limas Sweed, Steelers wide receiver: Though on the roster, Sweed tore his Achilles’ tendon during minicamp and was put on injured reserve for the year.

David Thomas, Saints tight end: He had one catch for nine yards in the Saints’ 31-17 win over the Peyton Manning-led Colts for the first NFL title for New Orleans. Thomas is one of a few players to win both a national championship and a Super Bowl title. He started eight regular season games and two playoff games that year. He had four catches for 41 yards in the postseason.

Casey Hampton, Steelers defensive tackle: Hampton had two tackles in the Steelers’ thrilling 27-23 win over the Cardinals. It was Hampton’s second Super Bowl win in as many tries.

Tony Hills, Steelers offensive tackle: As a rookie Hills didn’t see any action on the field all season.

Limas Sweed, Steelers wide receiver: Sweed played, but he failed to make a catch in the game. It would turn out to be his lone Super Bowl win.

Lyle Sendlein, Cardinals center: He started the game and anchored the offensive line that allowed Kurt Warner to throw for 377 yards and three touchdowns despite the loss.

Aaron Ross, Giants cornerback: Ross started the game and had two tackles in the Giants’ 17-14 upset win over the previously undefeated Patriots in Super Bowl XLII. Ross finished the regular season with nine passes defended and three interceptions on the way to his first Super Bowl win.

David Thomas, Patriots tight end: He only played in two games of the 2007-2008 season due to a foot injury he suffered.

Nathan Vasher, Bears cornerback: Vasher performed really well as he had six tackles and three passes defended in the 29-17 loss. The Bears defense had been mauling opponents all year, but the Colts were able to score 16 unanswered points to take control of the game.

Cedric Benson, Bears running back: Benson carried the ball just twice for minus-1 yard before he injured his knee in the first half and had to miss the rest of the game.

Casey Hampton, Steelers defensive tackle: Hampton came up big in his first trip to the Super Bowl, registering four tackles and a sack in the Steelers’ 21-10 win over the Seahawks. It was Hampton’s first of two Super Bowl Championships.
Marcus Tubbs, Seahawks defensive tackle: Though he started 11 games in the regular season, he played as a reserve in the playoffs and managed two tackles in the loss to Pittsburgh.
D.D. Lewis, Seahawks linebacker: Lewis started the game and made four tackles, but one he didn’t make was when Ben Roethlisberger scored on a rollout play.