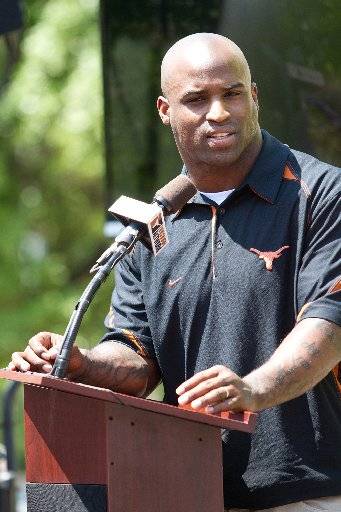 Call it a bit of unsolicited advice from one Lone Star State Heisman winner to another.

Texas Longhorn great Ricky Williams thinks Johnny Manziel, who starred for Texas A&M, should take some time off and rediscover his love for football. Manziel is being investigated by Dallas police for a possible domestic violence charge. The Cleveland Browns have indicated they will cut him next month. And Manziel’s father recently said he fears his son won’t live to see his next birthday.

Williams is in California, taping the reality show, Celebrity Apprentice. A reporter from TMZ.com asked him about Manziel and what he would recommend. Williams had his own substance abuse issues when he was playing in the NFL.

Williams said Manziel should “really get clear on what he wants to do with his life. If he wants to play, get some help, so he can get on the field.  If not, do something different. He made a little bit of money, he’s young, he has the rest of his life in front of him.”

Williams then talked about how he resurrected his football career by playing for the Toronto Argonauts.

“When I went to go play in Canada, it got my mind straight,” Williams said. “I found my love for football again, I came back and I had another 5 years to my career.”

Williams retired from the NFL in the summer of 2004. He returned in 2005 and served a four-game suspension for failing a drug test.

The NFL suspended him for all of 2006. That’s when he headed north for the CFL. He was reinstated by the NFL in late 2007.

Manziel appeared in public for the first time last weekend when he attended the wedding of his former teammate Mike Evans.

The site CBSSports.com found a video that had been posted on social media showing Manziel rapping to a Drake song.