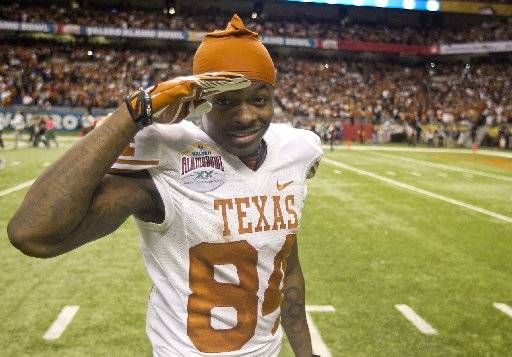 Update: Former Texas receiver Marquise Goodwin announced Friday on Twitter that he was giving up football, but it was an April fools day joke, despite him writing that it was “no joke” on a later post.

Bills WR @flashg88dwin says yesterday's tweet was a joke and he'll be back with team. 'Football is my deal. Track is my fun.'

But rest assured, he’s not retiring from sports. Instead, he’s trying for a spot on the Olympic track team.

Goodwin will be competing Saturday at the Texas Relays to test his running and jumping skills. Besides playing football _ he helped the Longhorns beat Oklahoma and Texas A&M as a freshman _ Goodwin was a two-time NCAA long jump champion for the UT track team. He also was a member of the 2012 U.S. Olympic team, where he finished 10th.

Goodwin ran a 4.27 second 40-yard dash at the NFL Combine in 2013. It was the third fastest time ever recorded at the annual scouting event. The Buffalo Bills drafted Goodwin in the third round.

After a three-year competitive break, Goodwin started running track again last year and he missed by one spot of making the U.S. team to the World Championships. He did win a silver medal at the Pan Am Games.