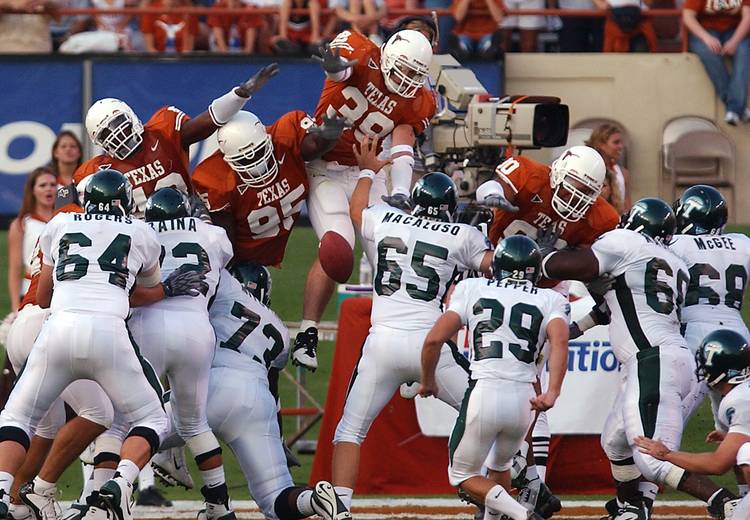 At Texas, Brown was a force, starting 13 games as a freshman and recording 25 tackles. He was a finalist for the Bronko Nagurski Trophy and the Outland Trophy. He was the Big 12 Defensive Player of the Year as a junior, recording 70 tackles, 13 for a loss and 6.5 sacks and was a consensus All-American before declaring for the draft after his junior year.

Brooks is one of two Longhorns taken 31st overall. He and Ray Poage (tight end drafted by Minnesota in 1963) were 31st overall picks. However, they were not first round picks at the time. Brooks was the fourth pick of the second round in 1970, but 31st overall. He played seven seasons across stints with Houston and St. Louis before his career ended in 1976. He started a career-high 13 games for St. Louis in 1974.

Bertelsen was the fourth pick of the second round and 30th overall by the Rams. He played five seasons for the Rams and rushed for 2,466 yards in 68 games and 35 starts. He made the NFL Pro Bowl in 1973, the same year he finished eighth in the league in all-purpose yards with 1,395. He retired in 1976 at the age of 26.

At Texas, the Wisconsin native helped the Longhorns to the 1969 National Championship and rushed for 2,510 yards in his career at Texas.

Brockermeyer was the fourth tackle taken in the ’95 draft and went to the Panthers where he played four seasons and made 55 starts in 58 games for the expansion franchise. He also went on to start 45 of 46 games for Chicago Bears over three years and ended his career with two seasons in Denver, where he started three games.

Brockermeyer was a 1991 high school All-American at Arlington Heights High School in Fort Worth and an All-American in 1994 for Texas.

Brockermeyer was inducted into the Texas Men’s Hall of Honor last September.

Dillon only had one working eye, but that didn’t stop the Temple High School product from becoming a Packers Hall of Famer and an All-American at Texas.

Six years after the first NFL draft (no Longhorns in the 1936 draft), Kutner was the 26th overall pick coming in the fourth round. He played five seasons for the Chicago Cardinals. He was the 1948 NFL Most Valuable Player and along with playing defense, he recorded 3,060 receiving yards and 33 touchdowns in his career.

No. 25. Texas has never had a player taken 25th overall

Hatchett played three seasons for the then lowly Colts and split his fourth season with Baltimore and Houston Oilers. He recorded seven interceptions in his career and started 44 of his 49 games.

Hatchett is fourth all-time in Texas history with 15 interceptions from 1977-1980. He had 55 career pass break-ups.

Tubbs played three seasons in the NFL and started 11 games in 2005 for the Seahawks. He recorded 37 tackles and seven sacks in his career. He suffered a knee injury in 2006 that required mircofracture surgery and missed most of the season, all of the 2007 season and was released in 2008. He began working as the assistant of Director of Football Operations for Texas in 2012.

Tubbs started 37 games for the Longhorns, beginning his career as a tight end before switching to defensive tackle. He recorded 205 tackles and 19.5 sacks during his college career.

Texas has had five players taken 22nd overall since 1948. Quarterback Paul Campbell (1948), running back Jerry Cook (1963), offensive tackle Ken Jackson (1951) and offensive guard Buck Lansford (1955). Thomas is the only one who was officially a first-round pick when the Bears took him 11 spots ahead of No. 33 pick, Brett Favre. Thomas played four seasons in the NFL, two with the Bears and two with the Oilers. He started just seven games in his career.

Thomas is considered one of the worst picks in Bears history.

Gray is considered one of the best defensive backs in Texas history and was taken by the Rams in 1985. He played seven seasons for the Rams, making four Pro Bowls and leading the league in interceptions with three of them returned for touchdowns. With 28 interceptions in his career, he finished his career with stints in Houston and Tampa Bay.

He’s gone on to have a successful coaching career with stints at various NFL teams as well as serving as a Texas assistant.

As a Longhorn, Gray was a 1983 and 1984 All-American and had 14 interceptions in Southwest Conference play. He is a member of the College Football Hall of Fame.

Gray isn’t the only Texas player taken No. 21.

Bob McKay was taken 21st by the Cleveland Browns in 1970. The offensive tackle played nine seasons and started 71 games for the Browns and New England. At Texas, McKay was a 1969 All-American.

Ross has started 52 games in his career and won a Super Bowl as a rookie defensive back in 2007-08 with the Giants. Ross has 11 interceptions in his NFL career. After playing six seasons with the Giants, Ross has spent time with the Jacksonville Jaguars and Baltimore Ravens. He was cut by the Cleveland Browns last August.

The San Antonio John Tyler product won a BCS National Championship at Texas in 2005 and was the 2006 Big 12 Defensive Player of the Year and 2006 Jim Thorpe Award winner. He had 10 interceptions in his Texas career.

Bohls: Jordan Spieth’s slipping … into yet another green jacket?