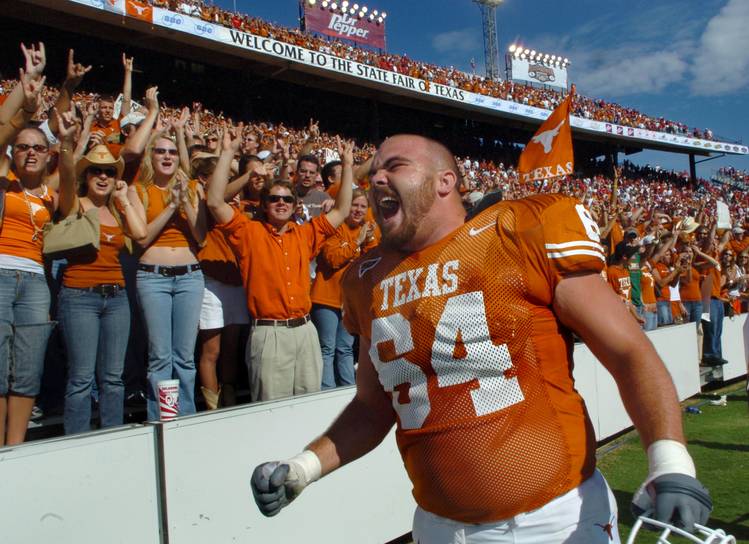 Since the NFL narrowed down its draft process to seven rounds starting in 1994, Texas has been well-represented at the draft. The Longhorns have had a player taken in every draft but 2014.

But what draft saw the most Longhorns taken? Remember, we’re leaving out drafts pre-1994, when the League had as many as 32 rounds some years (32! That’s a lot of Chris Berman and Mel Kiper in today’s TV).

The answer is 2007, when seven Longhorns were drafted nine years ago. Here is a look back at the 2007 Draft and the Longhorns taken.

Some prologue: Texas won the 2005 BCS National Championship. The following draft in 2006 had six Longhorns taken, including the third overall pick, Vince Young. The next year, Texas had seven players taken, giving that 2005 team at least 13 future NFL players who were either sophomores, juniors or seniors (there were way more pros on the title team), but it shows where the program was at the time.

Griffin arguably has had the most successful career of anyone drafted in 2007. Until this offseason, Griffin had played his entire career with the Titans. He signed with Minnesota Vikings after being released by the Titans following nine seasons and one Pro Bowl. He has 25 career interceptions and 192 tackles playing free safety.

At Texas, Griffin was a hometown talent, having played at `Bowie High School and went on to play four seasons at Texas from 2003-06. He was a first team All-Big 12 and a second team All-American. As a senior he has 126 tackles, 79 of them solo, and four interceptions.

The very next pick showed just how prominent “DBU” was during the Mack Brown era at Texas as two Longhorn defensive backs were taken consecutively in the draft. Ross played on the 2007 Super Bowl Champion New York Giants team and played five seasons in New York before moving on to Jacksonville. He has bounced around the league with stops in Cleveland, the Giants again and Baltimore. He has 11 career interceptions and played in 15 games for the 2007 champions, starting nine of them.

Texas produced some of the best offensive lines in college football during the 2000s, so it’s no surprise one of the top picks from Texas in this draft was a guard. Blalock played eight seasons for the Falcons from 2007-2014. He started 125 of the 125 games he played in, helping the Falcons to a handful of playoff appearances, including the  2012 NFC Championship game.

Blalock was a 2006 consensus All-American and the Big 12 Offensive Lineman of the Year. He was a four-time first team All-Big 12 selection and before college was a USA Today All-American in 2001 at Plano East High School. He played at Texas from 2002-2006 and blocked for Cedric Benson, Vince Young, Colt McCoy and Jamaal Charles.

Brown played seven seasons with the 49ers, starting 32 games in 2011 and 2012, seasons in which the 49ers reached the NFC Championship Game and the Super Bowl.  He left San Francisco in 2014 to join the Oakland Raiders , where he started 14 games and spent last season with the New England Patriots.

The 31-year-old has not signed with a team following a injury-plagued 2015.

At Texas from 2002-2006, Studdard was the leader of the Longhorns’ offensive line, playing center and being a All-Big 12 selection in 2006. His father, Dave Studdard, was an offensive tackle for the Denver Broncos who also played at Texas.