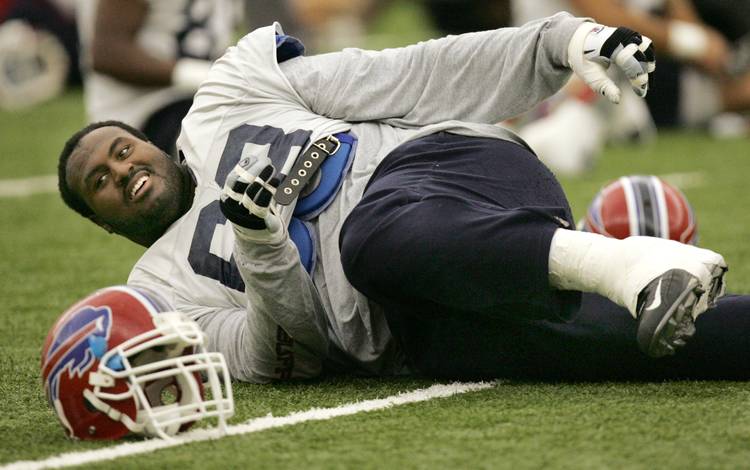 ORG XMIT: NYDD301 Buffalo Bills' Mike Williams stretches during practice inside the fieldhouse at Ralph Wilson Stadium in Orchard Park, N.Y., Wednesday, Nov. 9, 2005. Williams was the first tackle selected in the 2002 NFL draft and has never played any offensive line position other than right tackle in his life. But if the Bills want him to make the switch to left guard, Williams isn't going to argue or question it. (AP Photo/David Duprey)

Williams was a local product from McNeil High School in Austin that went to Texas. He started 13 games in 2009 and had three interceptions. In 2010, he was limited to 11 games, but still was productive. The Bills took him 34th overall in the second round and he’s started 47 of the 52 games he’s played in for the Bills, recording seven interceptions. He had a scary injury in 2015 that limited his action.

The 78th overall pick in 2013 has a decision to make on whether he’s going to compete for a spot on the 2016 Olympic team or if he’s going to be a Bill. Or is he going to do to both? He’s made the process very confusing lately.

The first 365th overall pick coming in the 13th round was a 1975 All- Southwest Conference selection. He didn’t play in the NFL.

Of note: Mike Williams was selected fourth overall by the Bills and is one of the club’s biggest draft failures after playing four seasons and starting 48 games, often times struggling. The former Longhorn standout was out of the league by 2005, but briefly returned for a 2009 eight game stint with Washington. Williams was taken before Pro Bowlers Dwight Freeney, Ed Reed, Bryant McKinnie, Roy Williams and we’ll stop before the people of Buffalo don’t write letters.

But we’ll be straight up, Mike Williams was pretty awesome at Texas, and blocked for Ricky Williams and Major Applewhite. Plus, there’s this graphic in the Statesman’s archives (he’s No. 63)

Longhorns in the NBA playoffs: Through Apr. 20