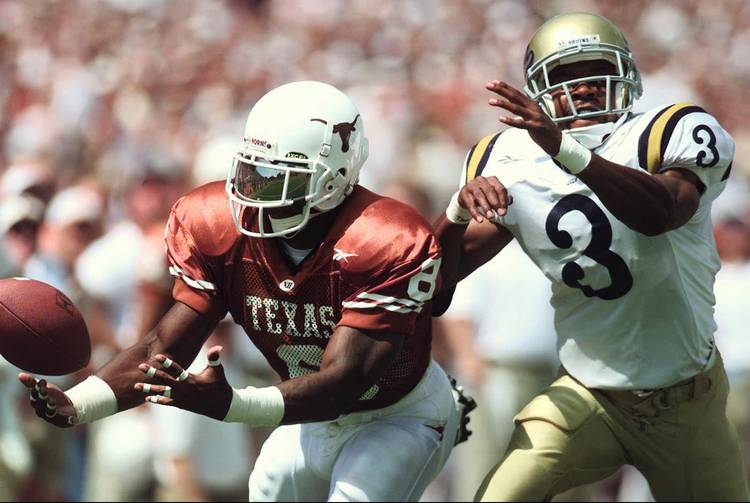 Photo by Ted S. Warren / aa-s -- In the first of many missed passes, Wayne McGarity bobbles the ball in the first quarter as Javelin Guidry stays on his heels.

Talbert was taken 100th overall in the eighth round (he was also taken by the Oilers in the AFL) and went on to play two seasons in Dallas with four starts. But his career didn’t take off until he went to Atlanta, here he started 12 games and New Orleans, where he started 14 games. His brother, Diron, played 14 season in the NFL. Don was an All-American at Texas and All-Southwest Conference player. He was inducted into the Longhorn Hall of Fame in 1992.

Swaim was the 246th pick and taken in the seventh round. With the Cowboys last season he caught one pass and started one game. At Texas he was a two-year starter and played in 26 games.

Of note: Dallas (Arlington) is a few hours away from Austin, but the Longhorns have only had one player (Swaim) taken by the Cowboys since 1999, when Wayne McGarity was taken in the fourth round.