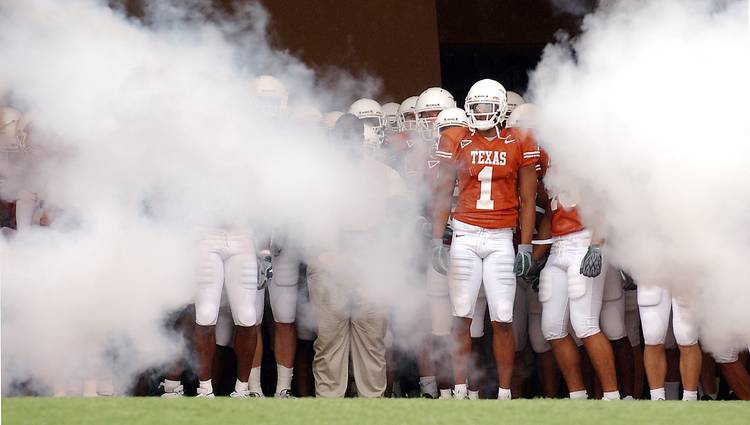 Sloan Thomas leads Texas players as they prepare to take to the field for their home game opener against New Mexico State in 2003. (Deborah Cannon/American-Statesman)

Studdard’s pro career isn’t flush with accolades, but he did start 14 games in 2009, which is more than of the other two Houston Texans Longhorn draft picks. At Texas from 2002-2006, Studdard was the leader of the Longhorns’ offensive line, playing center and being a All-Big 12 selection in 2006. His father, Dave Studdard, was an offensive tackle for the Denver Broncos who also played at Texas. Studdard was the 183rd pick by Houston in 2007.

The 89th pick of the 2017 NFL Draft, Foreman eventual became one of the Texans’s top rushers in his rookie season. Just when he was starting to gain a little traction for the Texans, Foreman suffered a torn Achilles in November. He finished with 327 rushing yards, two rushing touchdowns with six catches and 83 receiving yards.

The 151st pick of the 2008 draft in the fifth round, Okam played two seasons in Houston and split the 2010 season with Houston, Seattle and Tampa Bay. He last played in the NFL in 2011 with the Buccaneers. At Texas, Okam recorded 7.5 sacks and 95 tackles. He won a national championship and had his best season in 2007 when he recorded five sacks.

The 211th pick of the 2004 draft in the seventh round played in one game in 2005 for the Titans. At Texas, Thomas caught 88 passes and 12 touchdowns. His best season at Texas was a sophomore when he caught 29 passes for 435 yards and five touchdowns.

Of note: So, we’ve covered the three Longhorns who were drafted by the Houston Texans. But the greatest player drafted by an NFL team from Houston was Earl Campbell.