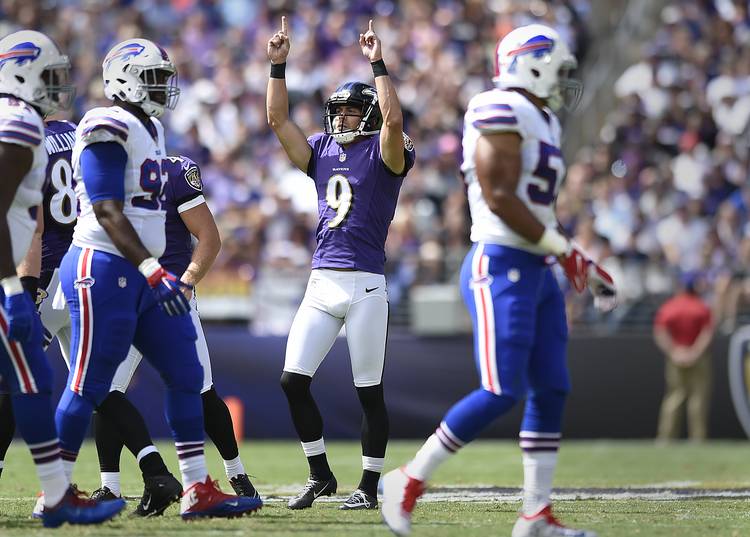 Baltimore Ravens kicker Justin Tucker reacts after scoring a field goal during the first half of an NFL football game against the Buffalo Bills in Baltimore, Sunday, Sept. 11, 2016. (AP Photo/Gail Burton)

Is there such a thing as a former Longhorn? These players will always be Longhorns to University of Texas fans, even though they’ve graduated to the next level of football. The Longhorns have as many players in the NFL as there are teams, 32. That’s the most from the Big 12 conference. Every week we’ll update you on how they performed the previous weekend. Here’s a look at the Longhorns in the NFL and how they fared in Week 1.

Kenny Vaccaro, S, New Orleans—He was second on the team with seven tackles and he had one pass deflection on a two-point conversion attempt in the Saints’ loss to the Raiders.

Quandre Diggs, CB, Detroit—The second-year player made six tackles in the 39-35 win over the Colts.

Derrick Johnson, LB, Kansas City—The 12th-year player had five tackles in the Chiefs’ amazing comeback win over the Chargers. The defense held the Chargers to six points in the second half as the Chiefs recorded their biggest comeback in franchise history in the 33-27 overtime win.

Jordan Hicks, LB, Philadelphia—He started in the Eagles’ 29-10 win over the Browns and had four tackles to go along with a pass deflection.

Lamarr Houston, LB, Chicago—Houston had four tackles in the Bears’ 23-14 loss to the Texans.

Keenan Robinson, LB, Giants—The former Washington Redskin had three total tackles in the Giants’ 20-19 win over the Cowboys on Sunday.

Aaron Williams, S, Buffalo—Despite not starting, Williams expects to play more as he gets properly conditioned after missing some time due to a concussion in the preseason. He managed three tackles in limited action on Sunday.

Justin Tucker, PK, Baltimore—Tucker was perfect on the day, making two field goals and an extra point. He hit a 50-yarder to open up the scoring in the first quarter.

Malcom Brown, DT, New England—The Patriots’ starter recorded one tackle in the win over the Cardinals on Sunday Night Football.

Sam Acho, LB, Chicago—He had one tackle as the Bears’ defense couldn’t slow the Texans enough in the second half.

Malcolm Brown, RB, Los Angeles—He rushed for five yards on his lone attempt and caught a pass for eight yards. Todd Gurley didn’t have a good game either.

Phil Dawson, PK, San Francisco—The ageless wonder connected on all four of his extra point attempts as the 49ers shut out the Rams.

Jamaal Charles, RB, Kansas City—His recovery from a torn ACL last season is taking longer than anticipated as he sat out the first week of the season.

Hassan Ridgeway, DT, Indianapolis—The rookie had one tackle in his NFL debut.

Geoff Swaim, TE, Dallas—The second-year tight end has already matched his catch total from last year. He had one reception for 21 yards in the Cowboys’ loss to the Giants.

Brian Orakpo, LB, Tennessee—He started for the Titans but didn’t register a stat. The 25 points given up by Tennessee looks worse for the defense since two Vikings touchdowns were scored when the Titans’ offense was on the field.

Donald Hawkins, OT, Carolina—After signing a futures contract with the Panthers in January he was active for the Panthers’ loss on Thursday to the Broncos. He was an undrafted free agent in 2014 and was on the Cowboys’ 53-man roster for the whole season.

Roy Miller, DT, Jacksonville—He started but didn’t register a tackle in the Jags’ 27-23 loss to the Packers.

Alex Okafor, LB, Arizona—He played in the Sunday night loss to the Patriots but didn’t record a tackle. He’s opted to play the season with a torn biceps tendon rather than have season-ending surgery.

Colt McCoy, QB, Washington—He backed up Kirk Cousins in a disappointing 38-16 loss to the Steelers.

Chykie Brown, CB, Cincinnati—Brown was active, but didn’t register a stat in the Bengals’ 23-22 win over the Jets.

Marquise Goodwin, WR, Buffalo—The receiver didn’t log a stat as the Bills struggled to score many points in the 13-7 loss to the Ravens.

Mykkele Thompson, S, Giants—Thompson was a healthy scratch in the season opener.

Carrington Byndom, CB, free agent—He reached an injury settlement with the Ravens last week and is free to sign with any team.

Michael Griffin, S, free agent—The Vikings’ released him from the injured reserve list after his back injury wouldn’t let him compete for the starting job next to Harrison Smith in the defensive backfield.