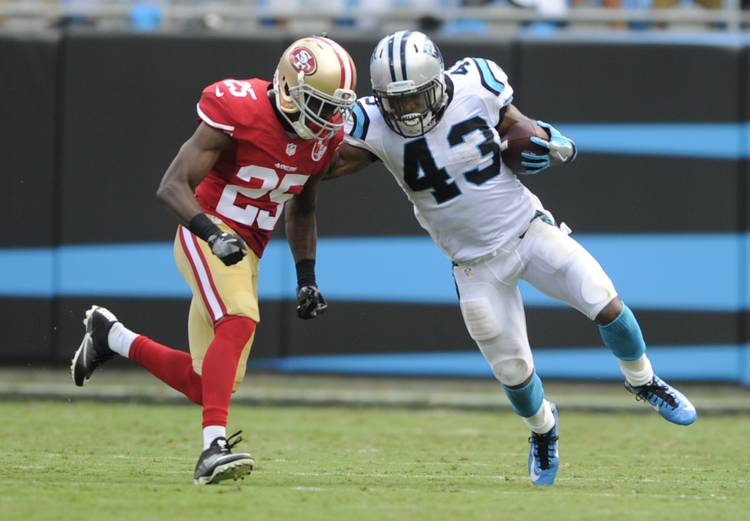 Marquise Goodwin, WR, Buffalo—A week after not logging a stat as the Bills struggled to score against the Ravens, Goodwin flashed his speed against the Jets on Thursday Night Football. He had two catches for 112 yards and this electrifying 84-yard touchdown. The 2012 Olympian even celebrated with a long jump after scoring the touchdown.

Fozzy Whittaker, RB, Carolina—Johnathan Stewart went out with an injury and Whittaker made the most of his opportunity, rushing for a career-high 100 yards on 16 carries. He also had three receptions for 31 yards. He did lose a fumble, but it mattered little as the Panthers blew out the 49ers 46-27.

Aaron Williams, S, Buffalo—He didn’t start but combined for 6 tackles and a pass deflection as the Bills fell to the Jets 37-31.

Phil Dawson, PK, San Francisco—Dawson was perfect, connecting on all three of his extra point attempts as well as two field goals. His long of 39 yards put the 49ers on the scoreboard first in the final quarter.

Donald Hawkins, OT, Carolina—He was available to play in Sunday’s win over the 49ers as the Panthers racked up 529 yards of offense. He was an undrafted free agent in 2014 and was on the Cowboys’ 53-man roster for the whole season. He spent time on the 49ers’ practice squad last year.

Justin Tucker, PK, Baltimore—Tucker was once again perfect on the day, making three field goals, including a long of 52 yards. He also had two extra points as the Ravens came back from 20 points down to defeat the Browns 25-20.

Brian Orakpo, LB, Tennessee—Orakpo had two sacks and four tackles as the Titans defeated the Lions 16-15. His second sack of the day came in the fourth quarter with just over 1 minute left to play as the Lions were attempting to drive the field to take the lead.

Jamaal Charles, RB, Kansas City—He missed Week 2 still recovering from a torn ACL, but he’s likely to return to the field in Week 3.

Derrick Johnson, LB, Kansas City—The 12-year veteran led the Chiefs with 11 tackles and a sack, but they fell to the Texans 19-12.

Malcom Brown, DT, New England—The second-year player had one tackle as the Patriots held the Dolphins to just 70 yards rushing in the 31-24 win.

Kenny Vaccaro, S, New Orleans—He continued to make a big impact for the defense as he had nine tackles and a forced fumble in the surprisingly low-scoring 16-13 loss to the Giants.

Keenan Robinson, LB, N.Y. Giants—The fifth-year players had five tackles and a pass deflection as the Giants held on to a close victory over the Saints.

Mykkele Thompson, S, N.Y. Giants—Thompson was a healthy scratch in the season opener and then injured his knee in Week 2. He was placed on injured reserve on Tuesday. Thompson missed his rookie season with an injured Achilles’ tendon.

Chykie Brown, CB, Cincinnati—Brown was inactive this week after being active in the Bengals’ 23-22 win over the Jets in Week 1.

Geoff Swaim, TE, Dallas—The second-year tight end caught two passes for 29 yards in the Cowboys first win of the year, including a 4th-and-1 conversion that went for 28 yards and set up their first touchdown. Despite that big play, this block may have been the highlight of his day as he cleared the way for Jason Witten.

Alex Okafor, LB, Arizona—He had two tackles in the Cardinals’ easy 40-7 win over the Buccaneers. He’s opted to play the season with a torn biceps tendon rather than have season-ending surgery.

Earl Thomas, S, Seattle—The perennial pro bowler had three tackles in a 9-3 loss to the Los Angeles Rams. He didn’t like his performance after Week 1, but any time you hold a team to just nine points you’ve got to be happy. The bigger problems are on the offensive side of the ball.

Malcolm Brown, RB, Los Angeles—Brown didn’t have a touch in the Rams’ 9-3 win over Seattle. He had two touches and 13 total yards in the opener.

Hassan Ridgeway, DT, Indianapolis—The rookie picked up two more tackles as the Colts remained without a win in the early season.

Adrian Phillips, S, San Diego—Phillips didn’t play on Sunday, but the injury to Jahleel Addae may provide Phillips with an opportunity to contribute.

Brian Robison, DE, Minnesota—Robison had a big strip-sack of Aaron Rodgers to help the Vikings defeat the Packers 17-14 on Sunday night. He finished the game with two tackles, a sack and a forced fumble. And he was pretty excited after that big play.

Sam Acho, LB, Chicago—Acho made three tackles and recorded his first sack of the year when he ran Carson Wentz out of bounds on 3rd and goal, but his Bears lost 29-14 to the Eagles on Monday night.

Jordan Hicks, LB, Philadelphia—He started the game and recorded one tackle as the Eagles took the easy win over the Bears.

Lamarr Houston, LB, Chicago—Houston didn’t record a stat for the Bears on Monday night, but what’s worse is he tore his ACL and is done for the year.

Trey Hopkins, G, free agent—The third-year lineman was waived by the Bengals on Thursday as they made room to add cornerback depth.

Michael Griffin, S, free agent—The Vikings’ released him from the injured reserve list after his back injury wouldn’t let him compete for the starting job next to Harrison Smith in the defensive backfield.

Duke Thomas, CB, free agent—He’s currently a free agent after reaching an injury settlement with the Texans before the start of the season.