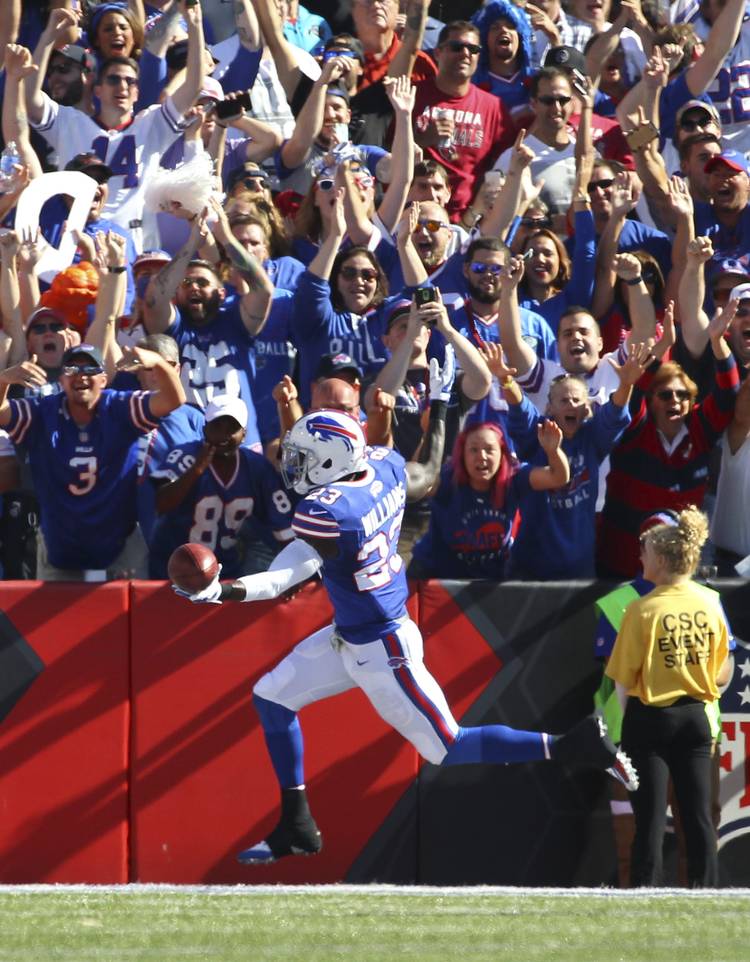 Buffalo Bills strong safety Aaron Williams (23) scores a touchdown after the Arizona Cardinals had a high snap on a field goal attempt during the second half of an NFL football game on Sunday, Sept. 25, 2016, in Orchard Park, N.Y. (AP Photo/Bill Wippert)

Derrick Johnson, LB, Kansas City—He led the Chiefs with 11 tackles, a tackle for loss, two pass breakups and one fantastic interception return for a touchdown. The Chiefs forced eight turnovers in the 24-3 win over the Jets.

6 INTs vs the @Chiefs – this one returned 53 yards for a TD#NYJvsKC https://t.co/diCBzWKcGr

Justin Tucker, PK, Baltimore—Tucker has yet to miss a field goal this season and connected on four, including a long of 54 yards, on Sunday as the Ravens defeated the Jaguars 19-17.

Brian Robison, DE, Minnesota—He had two tackles, a sack and a tackle for loss in the Vikings 22-10 win over the Panthers. He’s helped the Vikings defense reach the top-3 in scoring defense.

Keenan Robinson, LB, N.Y. Giants—Robinson made seven tackles, including a tackle for loss and a quarterback hit as the Redskins got by the Giants 29-27.

Fozzy Whittaker, RB, Carolina—Whittaker took a back seat to Cameron Artis-Payne, but he managed to rush for 22 yards on five carries. He also caught five passes for 34 yards in the loss.

Brian Orakpo, LB, Tennessee—Orakpo added a half sack to his total to go along with two tackles and a quarterback hit as the Titans fell 17-10. He has 2.5 sacks so far this season.

Aaron Williams, S, Buffalo—Williams helped the Bills defeat the Cardinals 33-18 as he picked up an errant snap on a field goal attempt and returned it 53 yards for a touchdown. It was the first touchdown of his six-year career. He also had a pass deflection in the game.

Earl Thomas, S, Seattle—Thomas had two tackles in the Seahawks’ blowout win over the 49ers.

Adrian Phillips, S, San Diego—He made four tackles which tied him for third-best on the team. He also hit the quarterback once.

Sam Acho, LB, Chicago—Acho had four tackles, a tackle for loss and a quarterback hit as the Bears fell to the Cowboys on Sunday night. He played in 74% of defensive snaps.

Quandre Diggs, CB, Detroit—He had a tackle, a tackle for loss and a pass deflection as the Lions came up short against the Packers.

Jordan Hicks, LB, Philadelphia—Hicks made three tackles and broke up two passes as the Eagles dominated the Steelers, 34-3. He’s a regular starter on the undefeated Eagles.

Alex Okafor, LB, Arizona—He didn’t start and he failed to log a stat as his Cardinals fell to the Bills. He played most of his snaps on special teams.

Phil Dawson, PK, San Francisco—Dawson missed his first field goal of the season, a 53-yard attempt, but he did connect on a 22-yarder and one extra point.

Roy Miller, DT, Jacksonville—Miller started and played about a third of the defensive snaps as the Jags lost a close game to the Ravens.

Donald Hawkins, OT, Carolina—He didn’t start but played on a few special teams snaps for the Panthers in the loss.

Hassan Ridgeway, DT, Indianapolis—The rookie didn’t log a stat in the Colts’ 26-22 win over the Chargers. He played in 30% of the defensive snaps.

Geoff Swaim, TE, Dallas—He didn’t make a catch and was targeted just once, but he played on 29 offensive snaps. He’s shot by Gavin Escobar as the second tight end option behind Jason Witten.

Marquise Goodwin, WR, Buffalo—Even with Sammy Watkins out, Goodwin couldn’t repeat Week 2’s performance in which he scored on an 84-yard touchdown. He had just one catch for six yards in the win.

Colt McCoy, QB, Washington—He backed up Kirk Cousins who had a better performance in Week 3. It will probably take an injury for McCoy to get playing time.

Malcolm Brown, RB, Los Angeles—Brown didn’t have a touch in the Rams’ 37-32 win over the Buccaneers. He played a few snaps on special teams.

Chykie Brown, CB, Cincinnati—Brown did not play in the Bengals 29-17 loss to the Broncos on Sunday.

Michael Griffin, S, free agent—The Vikings’ released him from the injured reserve list and he signed with the Carolina Panthers on Tuesday.

Duke Thomas, CB, free agent—He’s currently a free agent after reaching an injury settlement with the Texans before the start of the season. He worked out for the Eagles on Monday.

Mykkele Thompson, S, N.Y. Giants—Thompson was a healthy scratch in the season opener and then injured his knee in Week 2. He was placed on injured reserve.

Texas stays at No. 5 in Big 12 football power poll