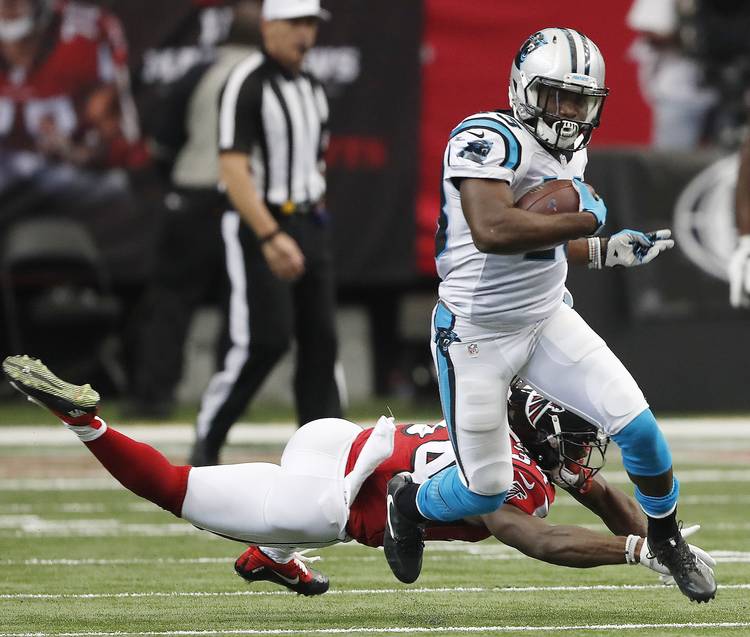 Carolina Panthers running back Fozzy Whittaker (43) runs by Atlanta Falcons defensive back Brian Poole (34) during the first half of an NFL football game, Sunday, Oct. 2, 2016, in Atlanta. (AP Photo/John Bazemore)

Brian Orakpo, LB, Tennessee—Orakpo continued his sack streak as he collected another one against the Texans in a 27-20 loss. He had four tackles, a QB hit and a pass defended in the effort. He’s up to four sacks on the year, which is good for a tie for third in the league.

Keenan Robinson, LB, N.Y. Giants—Robinson made six tackles, which was third best on the team. He has 21 total tackles on the year.

Earl Thomas, S, Seattle—Thomas was second on the team in tackles with seven. He also made his first interception of the year late in the 4th quarter to go along with two passes defended. The Seahawks downed the Jets 27-17.

Fozzy Whittaker, RB, Carolina—Despite losing carries to Cameron Artis-Payne, Whittaker is making a bigger impact. He had just three carries for six yards, but he led the Panthers in receiving as he hauled in nine passes for 86 yards. He was second in targets to Greg Olsen.

Aaron Williams, S, Buffalo—Williams continued to play well, a week after scoring his first touchdown, as he had two tackles and three pass breakups.

Malcom Brown, DT, New England—The second-year player had three tackles for the Patriots, but his team didn’t manage to score any points as they fell 16-0 to the Bills.

Hassan Ridgeway, DT, Indianapolis—Ridgeway made his biggest impact as a rookie this week as he had a half-sack to go along with two tackles, a quarterback hit and a pass defended. The Colts fell to the Jaguars in London 30-27, but Ridgeway is progressing well.

Roy Miller, DT, Jacksonville—Miller started, made two tackles and a had a quarterback hit in the Jaguars’ win across the pond.

Adrian Phillips, S, San Diego—Phillips made his second career interception in the Chargers loss to the Saints. He added three tackles and a pass breakup.

Michael Griffin, S, Carolina—Though he played just over half of the defensive snaps, he made an immediate impact as he made three tackles in the Panthers 48-33 loss to the Falcons.

Justin Tucker, PK, Baltimore—Tucker stayed perfect as he went 2-for-2 on field goal attempts in the Ravens’ 28-27 loss. He connected on a long of 43 yards and added an extra point.

Quandre Diggs, CB, Detroit—The Lions lost their third straight while Diggs contributed four tackles. He played in about half of the defensive snaps in the 17-14 loss to the Bears.

Derrick Johnson, LB, Kansas City—Johnson made five tackles, but the defense came down to earth after creating eight turnovers a week earlier. They fell to the Steelers 43-14.

Kenny Vaccaro, S, New Orleans—Vaccaro returned to action in the Saints 35-34 win over the Chargers. He started and played on every defensive snap on his way to making four tackles and hitting the quarterback once.

Malcolm Brown, RB, Los Angeles—Brown didn’t have a touch in the Rams’ 17-13 win over the Cardinals. He played a few snaps on special teams and made one tackle.

Sam Acho, LB, Chicago—Acho made one tackle in the Bears’ win over the Lions. He played in about 80% of the defensive snaps for the Bears.

Jamaal Charles, RB, Kansas City—Charles finally got back on the field for the Chiefs but was very limited. He had just two rushes for seven yards. He was targeted once in the passing game but didn’t make a catch.

Alex Okafor, LB, Arizona—He made most of his contributions on special teams. He made two tackles in the game.

Chykie Brown, CB, Cincinnati—Brown got some playing time this week and made a tackle as the Bengals defeated the Dolphins 22-7.

Jordan Hicks, LB, Philadelphia—Hicks and his Eagles were on a bye.

Phil Dawson, PK, San Francisco—Dawson was 1-for-1 from 36 yards and connected on two extra points as the 49ers lost 24-17 to the Cowboys.

Duke Thomas, CB, free agent—He’s currently a free agent after reaching an injury settlement with the Texans before the start of the season.