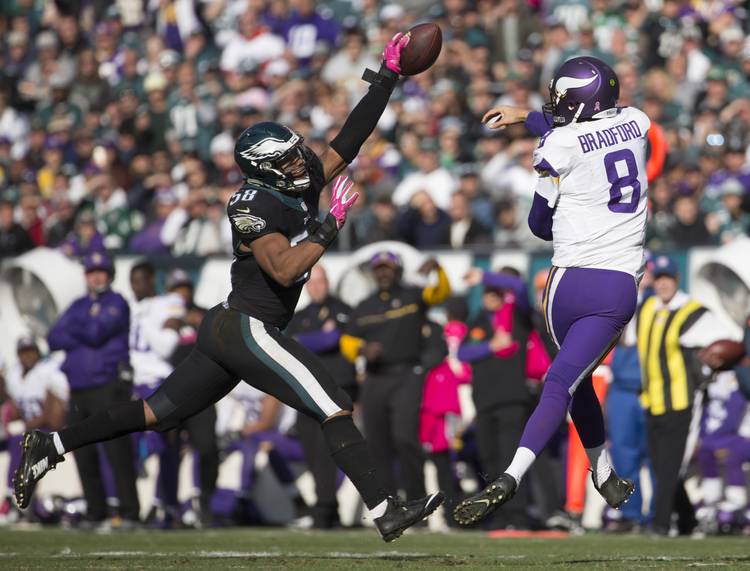 Jordan Hicks #58 of the Philadelphia Eagles knocks down a pass thrown by Sam Bradford #8 of the Minnesota Vikings in the third quarter at Lincoln Financial Field on October 23, 2016 in Philadelphia, Pennsylvania. The Eagles defeated the Vikings 21-10. (Photo by Mitchell Leff/Getty Images)

Marquise Goodwin, WR, Buffalo—He led the Bills with four catches and 93 yards receiving, including a 67-yard touchdown. Here he is scoring and celebrating with another long jump.

Jordan Hicks, LB, Philadelphia—Hicks has turned into a big part of the Eagles defense as he’s led them in tackling for two weeks in a row. He had 11 to go along with a sack, two pass breakups and a quarterback hit as his Eagles handed the Vikings their first loss of the season.

Malcom Brown, DT, New England—The 22-year-old had five tackles for the third straight week as the Patriots won 27-16 over the Steelers.

Sam Acho, LB, Chicago—Acho made three tackles to go along with a pass defended and two hits on the quarterback in the Bears’ 26-10 loss to the Packers on Thursday night.

Brian Orakpo, LB, Tennessee—Orakpo had two tackles as his sack streak ended at five games. He has seven sacks so far this year and is still on pace to surpass his career-high of 11.

Kenny Vaccaro, S, New Orleans—Vaccaro made five tackles including one tackle for loss as the Saints fell short against the Chiefs 27-21.

Derrick Johnson, LB, Kansas City—Johnson helped the Chiefs win their second game in a row as he made four tackles and hit the quarterback once.

Jamaal Charles, RB, Kansas City—Charles doesn’t look like the player he can be and is still bothered by his knee. He had just one carry for no gain in the Chiefs’ win.

Hassan Ridgeway, DT, Indianapolis—Ridgeway made one tackle and was in on 29 defensive snaps, about 40 percent of the plays.

Malcolm Brown, RB, Los Angeles—Brown didn’t get a touch on offense but played 10 snaps on special teams in the Rams’ 17-10 loss to the Giants.

Brian Robison, DE, Minnesota—The 10-year veteran and his Vikings suffered their first loss of the season as they fell 21-10 to the Eagles. He had two tackles and one tackle for loss in the effort.

Aaron Williams, S, Buffalo—Williams made four tackles in the Bills’ 28-25 loss to the Dolphins.

Chykie Brown, CB, Cincinnati—Brown didn’t get any playing time in the Bengals’ win over the Browns.

Justin Tucker, PK, Baltimore—Tucker is still perfect on the year after going 3 for 3 on field goals in the 24-16 loss to the Jets. Tucker hit a long field goal of 50 yards and connected on his only extra point attempt.

Phil Dawson, PK, San Francisco—Dawson made every kick, including a 28-yard field goal. He hit both of his extra point attempts.

Earl Thomas, S, Seattle—Thomas made two tackles and broke up two passes as the Seahawks and Cardinals played to a 6-6 tie. The Seahawks defense was on the field for 46 minutes, 90 plays, and gave up just six points. Thomas made a game-saving tackle when he forced David Johnson out of bounds inches shy of the goal line in overtime.

Adrian Phillips, S, San Diego—Phillips started the game and played in nearly half the defensive snaps but didn’t log a stat as the Chargers defeated the Falcons 33-30 in overtime.

Alex Okafor, LB, Arizona—Okafor had one tackle and in the tie against the Seahawks on Sunday night.

Tony Hills, OT, New Orleans—He played left tackle for 10 snaps on the offense as the Saints fell to the Chiefs. He replaced Terron Armstead who was injured.

Fozzy Whittaker, RB, Carolina—Whittaker and the Panthers were off in Week 7.

Michael Griffin, S, Carolina—He and the Panthers had a bye in Week 7.

Donald Hawkins, OT, Carolina—The Panthers were off in Week 7.

Geoff Swaim, TE, Dallas—Swaim and the Cowboys were off in Week 7.