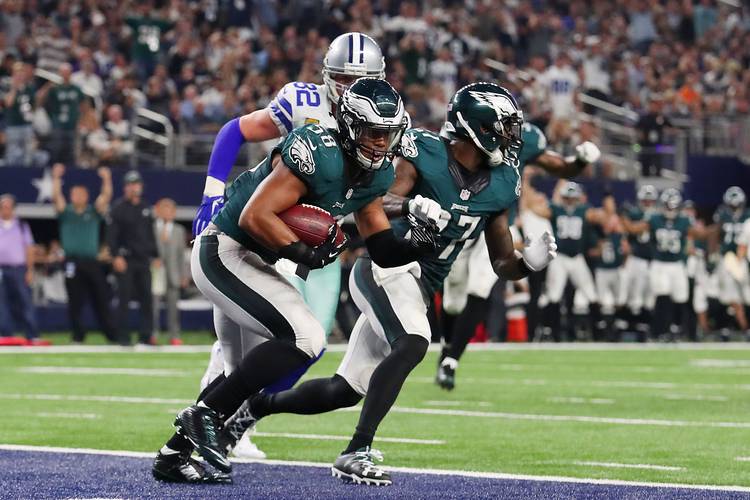 Jordan Hicks, LB, Philadelphia—Hicks continued to play well this season as he had six tackles to go along with an interception and a quarterback hit. His pick came at a crucial time late in the first half which kept the Cowboys from taking a lead while allowing the Eagles to set up a field goal. Though the the Eagles eventually fell 29-23 in overtime, the second-year linebacker is making an impact. Here’s his third career interception.

Jamaal Charles, RB, Kansas City—Charles was placed on injured reserve, according to Ian Rapoport of the NFL Network, after it was determined he needed a second surgery on his knee. He’s still able to return by Week 17, which would allow him to be available for the playoffs. He didn’t play in the Chiefs’ 30-14 win over the Colts.

Earl Thomas, S, Seattle—Thomas made two tackles and broke up a pass in the Seahawks’s 25-20 loss to the Saints. His biggest play came on a fumble return for a touchdown to give the Seahawks an early lead. It was the third touchdown of his career and his first since 2012.

Derrick Johnson, LB, Kansas City—Johnson led the Chiefs with 10 tackles as they won their third straight game, a 30-14 win over the Colts. It was the third time Johnson had at least 10 total tackles in a game this season.

Adrian Phillips, S, San Diego—Phillips started the game and made four tackles as the Chargers fell to the Broncos, 27-19. He also had a pass breakup and played in over 90 percent of the defensive snaps.

Brian Robison, DE, Minnesota—The Vikings lost their second straight game as their offense struggled to score. Robison made a season-high four tackles and hit the quarterback once as the defense allowed 20 points to the Bears.

Kenny Vaccaro, S, New Orleans—Vaccaro made three tackles as the Saints got back on the winning track. He has 35 total tackles on the year.

Quandre Diggs, CB, Detroit—Diggs made three tackles as the Lions lost for the first time in four weeks, falling to the Texans 20-13. He didn’t start the game but played in 46 percent of the defensive snaps.

Hassan Ridgeway, DT, Indianapolis—The rookie made two tackles, including one for a loss as the Colts fell to the Chiefs. He’s got nine tackles for the year, but has yet to make more than two in a single game. He did play in about half the defensive snaps.

Fozzy Whittaker, RB, Carolina—Whittaker had two carries for one yard and caught a pass for nine yards in the 30-20 win over the Cardinals.

Sam Acho, LB, Chicago—Acho made one tackle in the Bears’ win on Monday night. He played in about a third of the defensive snaps.

Geoff Swaim, TE, Dallas—Swaim played in about a quarter of the offensive snaps and caught one pass for eight yards in the Cowboys’ 29-23 overtime win over the Eagles.

Malcom Brown, DT, New England—The second-year player didn’t make a tackle but hit the quarterback once in the Patriots 41-25 win over the Bills. He started and played in 64 percent of the defensive snaps.

Tony Hills, OT, New Orleans—He played in a handful of snaps on special teams as the Saints defeated the Seahawks.

Donald Hawkins, OT, Carolina—He played in just one offensive snap for the Panthers.

Brian Orakpo, LB, Tennessee—Orakpo didn’t log a stat for the second time this season, though he did start in the Titans’ 36-22 win over the Jaguars. He played in nearly 60 percent of the defensive snaps.

Chykie Brown, CB, Cincinnati—Brown was inactive for the Bengals 27-27 tie with Washington.

Marquise Goodwin, WR, Buffalo—He was inactive due to a concussion as his Bills lost to the Patriots.

Aaron Williams, S, Buffalo—Williams missed Sunday’s game and was placed on injured reserve due to another neck injury. He suffered the injury in the Bills’ loss to the Dolphins on Oct. 23. He is out indefinitely.

Alex Okafor, LB, Arizona—Okafor was ruled out for Week 8 due to a calf issue. He could return in Week 10 after the Cardinals’ bye.

Justin Tucker, PK, Baltimore—Tucker and the Ravens were on bye in Week 8.

Phil Dawson, PK, San Francisco—Dawson and the 49ers were off in Week 8.

Keenan Robinson, LB, N.Y. Giants—Robinson and the Giants were on a bye in Week 8.

Malcolm Brown, RB, Los Angeles—Brown was off in Week 8.

Duke Thomas, CB, Philadelphia—He was signed to the Eagles practice squad after he had previously reached an injury settlement with the Texans before the start of the season. Philadelphia cut him from the practice squad on Oct. 21.