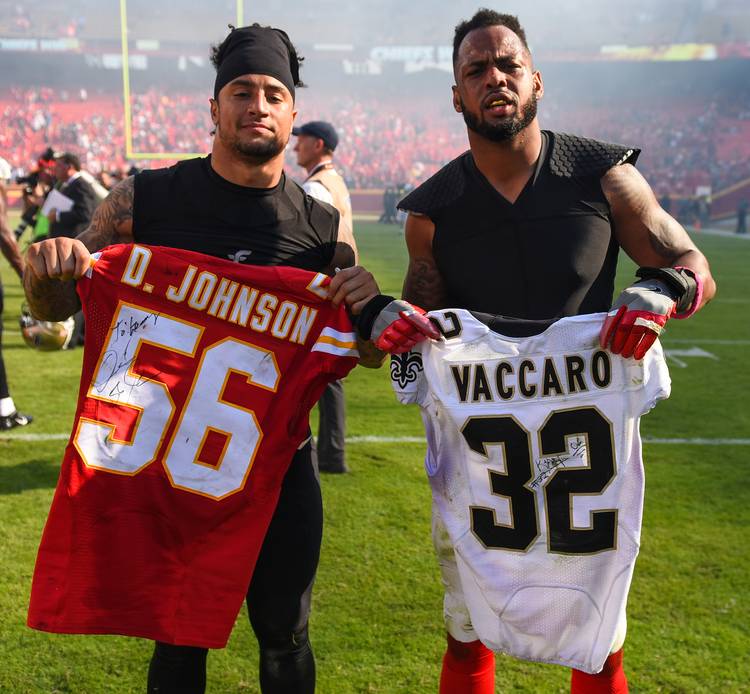 Keenan Robinson, LB, N.Y. Giants—Robinson had a season-high 11 tackles  and broke up a pass as the Giants beat the Eagles. He has 48 tackles on the season.

Kenny Vaccaro, S, New Orleans—Vaccaro led the Saints with nine tackles and made a fumble recovery in the 41-23 win over the 49ers.

Earl Thomas, S, Seattle—Thomas made a season-high nine tackles in the Seahawks 31-25 win over the Bills.

Jordan Hicks, LB, Philadelphia—Hicks made seven tackles, made an interception and broke up two passes as the Eagles fell to the Giants 28-23. It was the second game in a row that Hicks had an interception.

Derrick Johnson, LB, Kansas City—Johnson was tied for the lead in tackles as the Chiefs won 19-14 over the Jaguars. It was the fourth straight game Johnson made the most tackles on the team. He had seven tackles and also had a tackle for loss.

Marquise Goodwin, WR, Buffalo—Goodwin had four catches for 43 yards as the Bills came up short against the Seahawks.

Brian Orakpo, LB, Tennessee—Orakpo made three tackles and hit the quarterback once in the Titans’ 43-35 loss to the Chargers.

Justin Tucker, PK, Baltimore—Tucker and the Ravens held on to defeat the Steelers 21-14. Tucker hasn’t missed a field goal all year and connected on two, including a 49-yarder.

Geoff Swaim, TE, Dallas—Swaim doesn’t get many opportunities but he is pretty solid when given the chance. He had two catches on two targets for 11 yards.

Quandre Diggs, CB, Detroit—Diggs made three tackles in an improbable win over the Vikings.

Adrian Phillips, S, San Diego—Phillips broke up a pass and made two tackles in the win over the Titans.

Brian Robison, DE, Minnesota—The Vikings lost their third straight game as they fell in overtime to the Lions 22-16. Robison made one tackle in the loss.

Fozzy Whittaker, RB, Carolina—Whittaker had just one carry for no gain and one reception for one yard.

Michael Griffin, S, Carolina—Griffin made five tackles in the Panthers’ 13-10 win over the Rams.

Malcolm Brown, RB, Los Angeles—He had one carry for no gain in the loss to the Panthers.

Donald Hawkins, OT, Carolina—He didn’t get any playing time in the win over the Rams.

Tony Hills, OT, New Orleans—He played in a handful of snaps on special teams as the Saints defeated the 49ers.

Phil Dawson, PK, San Francisco—Dawson and the 49ers fell to the Saints but Dawson went 3-for-3 on field goals and made both of his extra points. He hit a long of 49 yards.

Hassan Ridgeway, DT, Indianapolis—He made one tackle in the 31-26 win over the Packers.

Malcom Brown, DT, New England—He was off this week as the Patriots were on a bye.

Sam Acho, LB, Chicago—Acho and the Bears were on a bye this week.

Colt McCoy, QB, Washington—He was off Week 9 with the Redskins.

Chykie Brown, CB, Cincinnati—Brown was on bye with the Bengals in Week 9.

Aaron Williams, S, Buffalo—Williams was placed on injured reserve due to another neck injury. He suffered the injury in the Bills’ loss to the Dolphins on Oct. 23. He is out indefinitely.

Jamaal Charles, RB, Kansas City—Charles was placed on injured reserve, according to Ian Rapoport of the NFL Network, after it was determined he needed a second surgery on his knee. He’s still able to return by Week 17, which would allow him to be available for the playoffs.