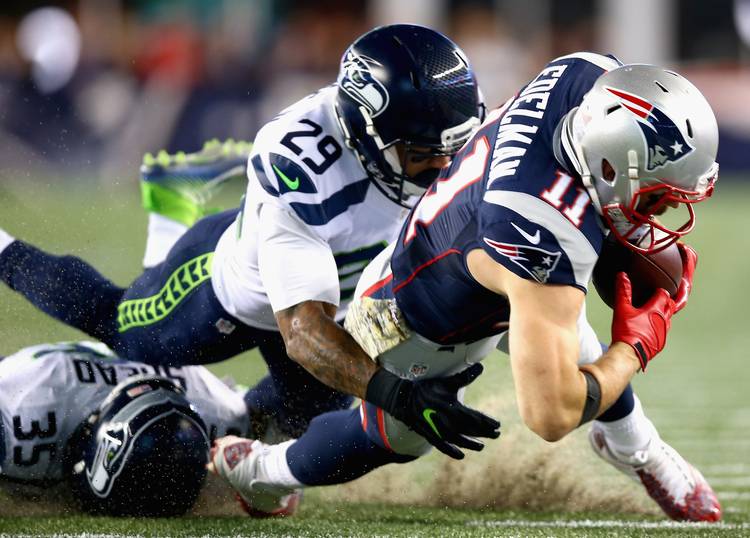 Julian Edelman #11 of the New England Patriots is tackled by Earl Thomas #29 of the Seattle Seahawks during the third quarter at Gillette Stadium on November 13, 2016 in Foxboro, Massachusetts. (Photo by Adam Glanzman/Getty Images)

Brian Orakpo, LB, Tennessee—Orakpo made four tackles and added two more sacks to his total as the Titans routed the Packers 47-25. He hadn’t had a sack in three games before pushing his total to nine on Sunday. He’s two short of his career high for a season.

Earl Thomas, S, Seattle—Thomas had nine tackles, a team high, to help the Seahawks defeat the Patriots 31-24 on Sunday night. It was his second straight game with nine tackles, a season-high. One of his hits nearly caused a serious injury to Rob Gronkowski. It was a clean, hard hit. Watch below.

“Probably one of the hardest I’ve got hit in my career for sure,” Gronkowski said to reporters following the game. “It was a good, clean hit; nothing against it.”

Thomas had this to say of his competitor on Tuesday.

Nothing but respect for Gronk. One of the best I've lined up against. Hoping to see him back on the field sooner than later.

Kenny Vaccaro, S, New Orleans—Vaccaro led the Saints with nine tackles while adding an interception, a sack and two passes defended. He returned an interception 30 yards to set up a touchdown that gave the Saints the lead before they eventually fell 25-23. Vaccaro is facing a four-game suspension after it was reported on Friday that he had a positive test for Adderall. He’s awaiting another test before possibly appealing the pending suspension. In the meantime he expects to play on Thursday night.

Adrian Phillips, S, San Diego—Phillips was second on the team with seven tackles as the Chargers fell to the Dolphins 31-24. He also had a tackle for loss in the contest.

Phil Dawson, PK, San Francisco—Dawson and the 49ers lost to the Cardinals 23-20, but Dawson was 2-for-2 on field goals and made both of his extra points. His long of 53 yards pulled the 49ers to within a touchdown in the third quarter.

Justin Tucker, PK, Baltimore—Tucker was 2-for-2 on Thursday night with a long of 40 yards. He connected on both of his extra points and remains perfect on the year in both categories.

Derrick Johnson, LB, Kansas City—Johnson made five tackles in the Chiefs’ comeback win over the Panthers. His team has won five in a row after starting 2-2.

Jordan Hicks, LB, Philadelphia—Hicks made three tackles in the 24-15 win over the Falcons. The win halted a two-game slide for Philly.

Sam Acho, LB, Chicago—Acho made two tackles as the Bears fell to the Buccaneers, 36-10 on Sunday.

Fozzy Whittaker, RB, Carolina—Whittaker ran the ball twice for five yards and made one catch for nine more. He returned two kickoffs for 20.5 yards a pop. He even made a tackle in the game.

Brian Robison, DE, Minnesota—The Vikings lost their fourth straight game, falling to the Redskins. Robison failed to log a stat though he played in about 86 percent of defensive snaps.

Michael Griffin, S, Carolina—Griffin didn’t make a tackle and played in 23 percent of the defensive snaps. He played in 65 percent of special teams snaps.

Alex Okafor, LB, Arizona—He returned to action in the Cardinals’ win over the 49ers. He didn’t log a stat but played in 21 percent of the defensive snaps and about a quarter of the special teams plays.

Malcolm Brown, RB, Los Angeles—He played in a handful of special teams snaps as the Rams defeated the Jets 9-6.

Tony Hills, OT, New Orleans—He played sparingly on special teams as the Saints fell in a heart breaker to the the Broncos.

Donald Hawkins, OT, Carolina—He didn’t get any playing time in the loss to the Chiefs.

Geoff Swaim, TE, Dallas—Swaim suffered a torn pectoral muscle in the exciting 35-30 win over the Steelers. He wasn’t targeted in the passing game as he played in 11 percent of the offensive snaps. His season is over as his recovery time will be about four months.

Marquise Goodwin, WR, Buffalo—Goodwin and the Bills were on a bye.

Quandre Diggs, CB, Detroit—Diggs was on a bye in Week 10.

Hassan Ridgeway, DT, Indianapolis—Ridgeway was off this week.

Earl Campbell: ‘If we get rid of coach Strong, who in the hell are we gonna get?’