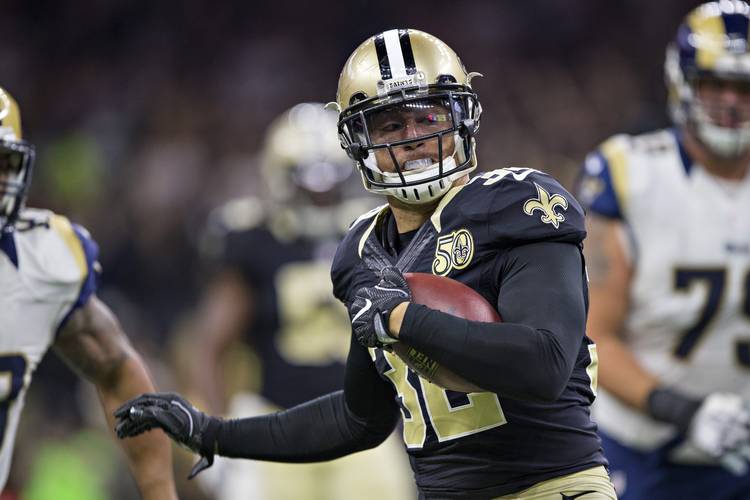 Kenny Vaccaro #32 of the New Orleans Saints returns a interception during a game against the Los Angeles Rams at Mercedes-Benz Superdome on November 27, 2016 in New Orleans, Louisiana. The Saints defeated the Rams 49-21. (Photo by Wesley Hitt/Getty Images)

Justin Tucker, PK, Baltimore—Tucker remained perfect on the year as he nailed four field goals, three from 50-plus yards, in the Ravens’ 19-14 win over the Bengals. His 57-yarder was a season-high. The NFL’s Twitter account even featured him as apart of their “have a day” tweets which highlight great fantasy football performances.

Malcom Brown, DT, New England—Brown led the Patriots with a season-high seven tackles as the Patriots defeated the Jets 22-17. The second-year player recorded at least five tackles for the fifth time this season.

Derrick Johnson, LB, Kansas City—Johnson made seven tackles, including a tackle for loss, and broke up a pass as the Chiefs outlasted the Broncos 30-27 on Sunday night.

Jordan Hicks, LB, Philadelphia—Hicks led the Eagles with eight tackles and hit Aaron Rodgers once as Philadelphia fell 27-13 to the Packers on Monday night.

Quandre Diggs, CB, Detroit—Diggs had six tackles, third best on the team, as the Lions edged the Vikings 16-13 .

Kenny Vaccaro, S, New Orleans—Vaccaro had an interception to go along with four tackles and a pass break up in the big win over the Rams. His interception came early in the third quarter.

Phil Dawson, PK, San Francisco—Dawson made a 36-yard field goal to go along with his three extra points.

Hassan Ridgeway, DT, Indianapolis—Ridgeway tied a season-high, two tackles, in the 28-7 loss to the Steelers.

Brian Orakpo, LB, Tennessee—Orakpo made two tackles and hit the quarterback once in the Titans’ 27-21 win over the Bears.

Sam Acho, LB, Chicago—Acho had two tackles in loss to the Titans on Sunday. He’s played in about 53 percent of the defensive snaps this season.

Michael Griffin, S, Carolina—Griffin had two tackles and a tackle for loss as the Panthers fell to the Raiders 35-32.

Fozzy Whittaker, RB, Carolina—Whittaker had four rushes for 14 yards but didn’t connect on his two targets. He also had two kickoff returns for 29 yards.

Marquise Goodwin, WR, Buffalo—Goodwin caught two of his four targets for 13 yards in the Bills’ 28-21 win over the Jaguars.

Malcolm Brown, RB, Los Angeles—Brown actually got to tote the ball a few times in the Rams’ 49-21 loss to the Saints. He had three carries for nine yards and played in five snaps overall.

Earl Thomas, S, Seattle—Thomas missed the first game of his NFL career and it showed on the field as the Seahawks trailed early to the Buccaneers. They eventually lost 14-5.

Alex Okafor, LB, Arizona—Okafor played in 23 defensive snaps but failed to log a stat as the Cardinals fell to the Falcons 38-19. His team has won just one game out of the last five.