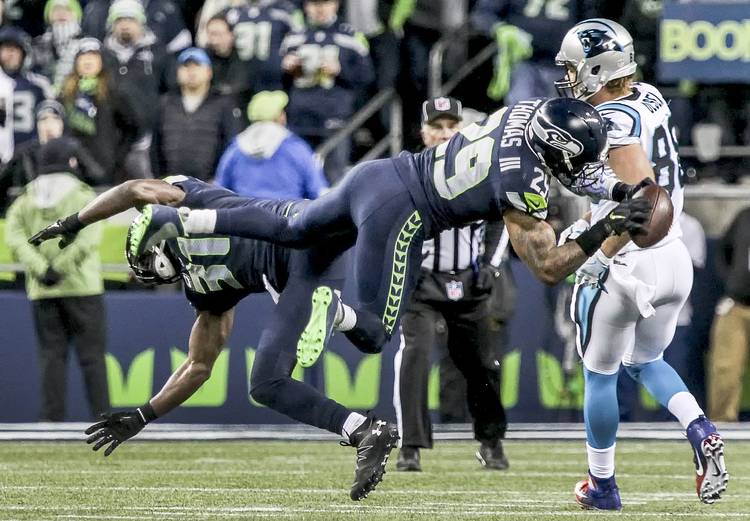 Seattle Seahawks safety Kam Chancellor, left, and Seahawks safety Earl Thomas collide on a pass during the first half of an NFL football game against the Carolina Panthers, Sunday, Dec. 4, 2016, in Seattle. (Kevin Clark/The Herald via AP)

Earl Thomas, S, Seattle—Thomas went from one of the top safeties in the league to potentially retired in a matter of minutes in Sunday night’s 40-7 win over the Panthers. Thomas, who returned to action Sunday after missing the first game of his career, cracked his tibia on a play in the second quarter. He nearly picked off Cam Newton on the play as he jumped and collided with Kam Chancellor. His value became quickly apparent as the Panthers scored on the very next play, going deep on a pass down the middle of the field.

Thomas is even apparently contemplating retirement, tweeting this during the game.

At least he was in a joking mood, calling out his fellow safety Chancellor.

Kam you owe me a steak . Haha

Cedric Golden doesn’t think Thomas is hanging his cleats up yet, but if he does, he’ll go down as one of the best at his position. He’s made 554 tackles, broken up 56 passes and made 23 interceptions in his career. He has one interception returned for a touchdown and he scored on a fumble return earlier this season.

Derrick Johnson, LB, Kansas City—Johnson was tied for the team lead in tackles, notching nine of them in the Chiefs’ remarkable 29-28 win over the Falcons. He added a tackle for loss as the Chiefs have won seven of their last eight.

Justin Tucker, PK, Baltimore—Tucker can’t miss, he remains perfect on the year, and he added a 55-yarder as the Ravens dominated the Dolphins 38-6. He connected on all five of his extra point attempts.

Keenan Robinson, LB, N.Y. Giants—Robinson made six tackles as the Giants fell to the Steelers, halting their six-game winning streak. The performance raised his total tackles to 65, two more than last season in as many games.

Brian Robison, DE, Minnesota—The Vikings lost their sixth game in seven tries, but they hung with the best team in the NFC for most of the game. The Dallas Cowboys needed 10 fourth-quarter points to hold off a defensive-minded Vikings team. Robison played his part, making two tackles and a sack as the team totaled three sacks in the game.

Michael Griffin, S, Carolina—Griffin had his most productive day as a Panther, making 14 tackles as Carolina was routed by the Seahawks 40-7.

Kenny Vaccaro, S, New Orleans—Vaccaro made six tackles, including a tackle for loss as the Saints defense actually held up pretty well. If their offense looked anything like usual at home, they could have avoided a 28-13 loss to the Lions.

Phil Dawson, PK, San Francisco—Unfortunately for the 49ers, Dawson accounted for all of their points in the 26-6 loss in Chicago. Dawson made two field goals, with a long of 31 yards.

Malcom Brown, DT, New England—Brown made three tackles as the Patriots won their third game in a row. His production came in spite of playing in just 48 percent of defensive snaps. He’s had at least three tackles in eight games this season from the defensive tackle position.

Jordan Hicks, LB, Philadelphia—Hicks made three tackles in the Eagles’ 32-14 loss to the Bengals. After missing half the season last year, he’s come back to make 65 tackles a sack and two interceptions with four games left to go.

Adrian Phillips, S, San Diego—Phillips made four tackles in the Chargers’ 28-21 loss to the Buccaneers.

Fozzy Whittaker, RB, Carolina—Whittaker had one carry for three yards and totaled 64 kickoff return yards on three attempts. He had a long return of 31 yards.

Quandre Diggs, CB, Detroit—Diggs had one tackle and a quarterback hit as the Lions impressively shut down the Saints offense. Diggs and the Lions defensive backfield held Drew Brees without a touchdown pass, breaking a 60-game home streak.

Hassan Ridgeway, DT, Indianapolis—Ridgeway had one tackle and hit the quarterback once as the Colts dominated the Jets, 41-10.

Sam Acho, LB, Chicago—Acho’s impact on the field was little compared to what he’s doing off it. He played in just 18 snaps, but he participated in the “My Cause, My Cleats” campaign and tweeted out his cleats in honor of the clinic he plans to build in Nigeria.

I can't wait to rock these cleats this Sunday to help build a clinic in Nigeria #MyCleatsMyCause #nfl https://t.co/omGtcjOyCJ pic.twitter.com/DoqN9Pbcyh

Alex Okafor, LB, Arizona—Okafor played in 17 defensive snaps and didn’t log a stat in the Carindals’ 31-23 win over Washington.

Brian Orakpo, LB, Tennessee—Orakpo and the Titans were on a Bye.