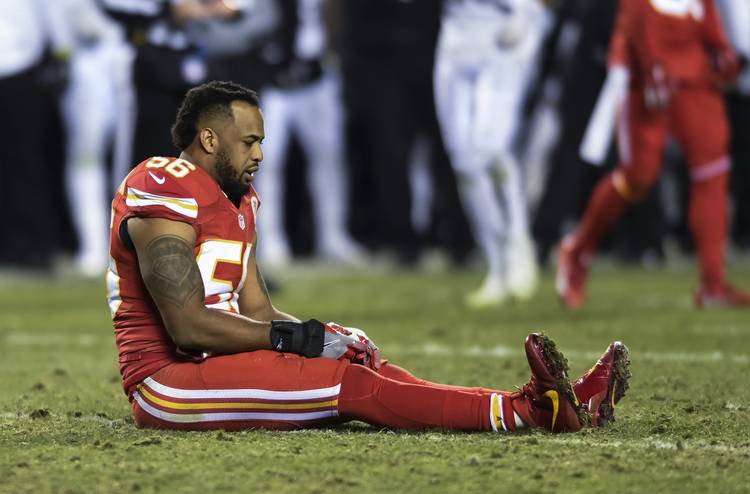 Kansas City Chiefs inside linebacker Derrick Johnson (56) suffered a season-ending injury during the first half of their NFL football game against the Oakland Raiders in Kansas City, Mo., Sunday, Oct. 23, 2016. (AP Photo/Reed Hoffmann)

Derrick Johnson, LB, Kansas City—Johnson became the second lifetime Longhorn in as many weeks to suffer a season-ending injury. He ruptured his Achilles for the second time in three years in the 21-13 win over the Raiders. He finishes the season with 90 tackles, a sack and a 55-yard interception returned for a touchdown. The 12-year veteran seemed to be more motivated to return to action than Earl Thomas did a week ago.

I want to thank everyone for all of the prayers and support I have gotten through this minor setback. My road to recovery starts now physically but mentally I still have unfinished business. Our Goal is still the same and I am still a Chief, so let's go chase this RING! #easilymotivated #blessedalways

Keenan Robinson, LB, N.Y. Giants—Robinson made seven tackles in the Giants’ 10-7 win over the Cowboys on Sunday night. He was second on the team in tackles as the Giants held the Cowboys to their lowest output of the season. He also had a pass breakup.

Brian Orakpo, LB, Tennessee—Orakpo and the Titans returned to action on Sunday, defeating the Broncos 13-10. Orakpo had four tackles and recorded his tenth sack of the season in the victory. He’s one sack shy of his career high of 11 which he set in his rookie year with the Redskins.

Hassan Ridgeway, DT, Indianapolis—Ridgeway had a career high five tackles and a sack as the Colts fell to the Texans 22-17.

Malcom Brown, DT, New England—Brown made four tackles and had a half tackle for loss as the Patriots held on to defeat the Ravens 30-23.

Justin Tucker, PK, Baltimore—Tucker finally didn’t convert on a field goal attempt though it wasn’t his fault. A perfectly timed jump by Shea McClellin over the deep snapper allowed the fifth-year linebacker to block Tucker’s 34-yard attempt in the first quarter. Tucker made three field goals on the night, including a 50-yarder. He’s 31-of-32 on the season and also connected on two extra points in the loss.

Jordan Hicks, LB, Philadelphia—Hicks made three tackles as the Eagles dropped their fourth game in a row. They’ve given up at least 26 points in each game in that stretch. Hicks has 68 tackles on the year.

Alex Okafor, LB, Arizona—Okafor played in about 20 percent of defensive snaps and failed to record a stat other than a fumble recovery he made on special teams late in the third quarter.

Sam Acho, LB, Chicago—Acho is Chicago’s nominee for the Walter Payton Man of the Year award due to his work with schools and hospitals in the Chicago area. His work with Living Hope Ministries focuses on medical aid for people in need in Nigeria. Acho played in just six defensive snaps and 68 percent of special teams snaps.

Fozzy Whittaker, RB, Carolina—Whittaker carried the ball three times for 15 yards in the Panthers’ 28-16 win over the Chargers. Whittaker also had a tackle on special teams.

Brian Robison, DE, Minnesota—Robison had just one tackle but recorded his third sack in four games as the Vikings got a much-needed 25-16 win against the Jaguars. His seventh sack of the year came in Minnesota’s second win in eight weeks.

Phil Dawson, PK, San Francisco—Dawson had a rough day against the Jets, making just one field goal on three attempts, a 47-yarder. He connected on both extra point attempts. If he had made either of his 40-plus yard missed field goals, the 49ers could have avoided overtime.

Malcolm Brown, RB, Los Angeles—Brown had four carries for 14 yards as the Rams were blown out by the Falcons 42-14.

Adrian Phillips, S, San Diego—Phillips had one tackle in the 28-16 loss to the Panthers.

Marquise Goodwin, WR, Buffalo—Goodwin didn’t have a touch in the game and was targeted just twice by Tyrod Taylor.

Tony Hills, OT, New Orleans—He played in just seven overall snaps in the Saints’ loss to the Buccaneers. He had a crucial false start penalty at the one-yard-line on first and goal near the end the first half.

Kenny Vaccaro, S, New Orleans—Vaccaro dropped his appeal of a four-game suspension last week ahead of Sunday’s 16-11 loss to the Buccaneers. He’ll miss the rest of the regular season. A positive test for Adderall, a banned substance, is the reason for his suspension, according to NFL.com.

Earl Thomas, S, Seattle—Thomas cracked his tibia on a play in the second quarter of Week 13’s win over the Panthers. He nearly picked off Cam Newton on the play as he jumped and collided with Kam Chancellor. Thomas is even possibly contemplating retirement.