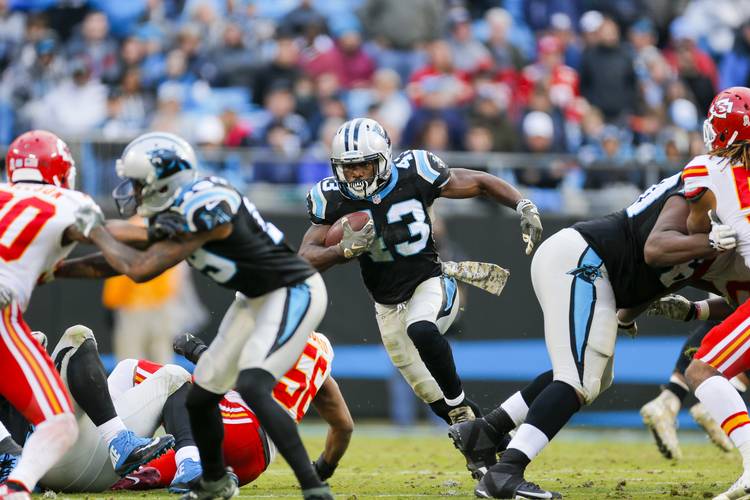 Carolina Panthers running back Fozzy Whittaker (43) runs the ball against the Kansas City Chiefs during an NFL game at Bank of America Stadium in Charlotte, N.C. on Sunday, Nov. 13, 2016. (Chris Keane/AP Images for Panini)

Is there such a thing as a former Longhorn? These players will always be Longhorns to University of Texas fans, even though they’ve graduated to the next level of football. Every week we’ll update you on how they performed the previous weekend. Here’s a look at the Longhorns in the NFL and how they fared in Week 16.

Earl Thomas, S, Seattle—Thomas cracked his tibia on a play in the second quarter of Week 13’s win over the Panthers. After previously tweeting that he was contemplating retirement, Thomas put fans at ease when he tweeted on Christmas eve that he would return next season.

I'll def be back next year..

Jordan Hicks, LB, Philadelphia—Hicks had the second most tackles in Thursday’s 24-19 win over the Giants. He had seven tackles, increasing his season total to 80.

Alex Okafor, LB, Arizona—Okafor recorded his first sack since Week 11 as the Cardinals defeated the Seahawks 34-31. He had two tackles in the game.

Justin Tucker, PK, Baltimore—Tucker made all four of his field goal attempts, including a 46-yarder as the Ravens came up short to the Steelers, 31-27, on Sunday.

Fozzy Whittaker, RB, Carolina—Whittaker carried the ball three times for 30 yards and caught one pass for 14 yards. He had two kickoff returns for 84 yards, including a long of 47 yards. The Panthers still lost 33-16 to the Falcons.

Phil Dawson, PK, San Francisco—Dawson hit both of his extra-point attempts in the win over Los Angeles.

Keenan Robinson, LB, N.Y. Giants—Robinson made three tackles as the Giants fell to the Eagles 24-19 on Thursday night.

Marquise Goodwin, WR, Buffalo—Goodwin was targeted five times but was only able to make one catch for 16 yards.

Adrian Phillips, S, San Diego—Phillips had two tackles as the Chargers lost their fourth game in a row. Phillips has set career highs in games played (13), tackles (35) and passes defended (3).

Malcom Brown, DT, New England—Brown had just one tackle as the Patriots trounced the Jets 41-3. If he makes one more tackle in Week 17, he’ll match his total tackles from his rookie season last year. He has three sacks this season, just like last year.

Brian Orakpo, LB, Tennessee—Orakpo made four tackles and hit the quarterback once as the Titans were blown out by the Jaguars 38-17. Orakpo needs one more sack to set a new career high. He currently has 10.5 sacks on the year, after a stat correction took a half sack away for the season.

Brian Robison, DE, Minnesota—Robison made his 100th career start in the league on Sunday, all with the Vikings. He had one tackle and a tackle for loss in the 38-25 loss to the Packers.

Sam Acho, LB, Chicago—Acho made one tackle in the 41-21 loss to Washington. He has just two tackles in the last four weeks. He’s got 25 tackles on the season.

Michael Griffin, S, Carolina—Griffin made one tackle as the Panthers fell to the Falcons.

Hassan Ridgeway, DT, Indianapolis—Ridgeway made one tackle after not logging a stat in Week 15 as the Colts fell to the Raiders 33-25.

Malcolm Brown, RB, Los Angeles—Brown had one carry for two yards as the Rams fell to the 49ers 22-21.

Donald Hawkins, OT, Jets—He hasn’t had any playing time since Week 10 and was signed by the Jets on Nov. 30 after being waived by the Panthers.

Tony Hills, OT, New Orleans—He didn’t get into the game for the 31-24 win over the Buccaneers.

Jamaal Charles, RB, Kansas City—Charles was placed on injured reserve. He could have been activated in Week 17, but after the Chiefs activated Justin March-Lillard on Dec. 22 that move was off the table.  He won’t be available for the playoffs.

One star for Mack Brown’s Uber driver in San Antonio