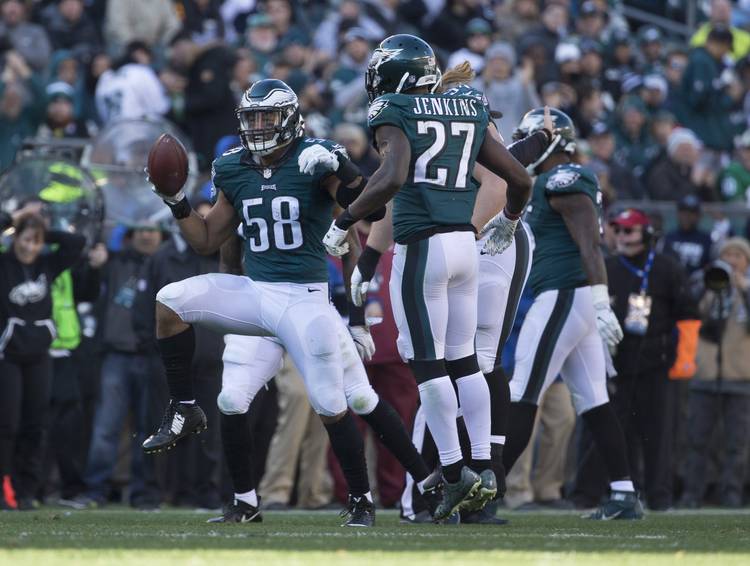 Jordan Hicks #58 of the Philadelphia Eagles reacts along with Malcolm Jenkins #27 after an interception in the second quarter against the Dallas Cowboys at Lincoln Financial Field on January 1, 2017 in Philadelphia, Pennsylvania. (Photo by Mitchell Leff/Getty Images)

Justin Tucker, PK, Baltimore—Tucker connected on a 30-yard field goal and made his only extra point attempt as the Ravens fell to the Bengals 27-10. Tucker and the Ravens are finished for the season, but the fifth-year kicker became the most accurate one in NFL history this season. He was 38-for-39 for 97.4 percent this year, increasing his career mark to 89.8 percent. Tucker rewarded the Ravens who signed him to a contract extension through the 2019 season last summer.

Keenan Robinson, LB, N.Y. Giants—Robinson was second on the team with seven tackles in the Giants 19-10 win over Washington. He finished the year with 83 tackles and seven passes defended. He played in every game for the first time in his five-year career and is set to take on the Packers in the Wild Card round of the playoffs.

Jordan Hicks, LB, Philadelphia—Hicks ended the season on a high note as he led the Eagles with five tackles and made two interceptions in the 27-13 win over the Cowboys. He had 85 tackles on the season, second most for the Eagles. He led the team with five interceptions.

Brian Orakpo, LB, Tennessee—Orakpo had a tackle for loss and broke up two passes as the Titans closed the season with a 24-17 win over the Texans. He finished the season with 10.5 sacks, a half-sack short of his career high.

Brian Robison, DE, Minnesota—Robison tied a season high with four tackles and a half sack as the Vikings crushed the Bears 38-10. He finished the year with 7.5 sacks and 28 tackles. It was his highest sack total since 2013 when he had nine.

Fozzy Whittaker, RB, Carolina—Whittaker rushed four times for nine yards and had one kick return for 35 yards as the Panthers fell 17-16 to the Buccaneers. He recorded career highs in both rushing (265) and receiving (226) yardage. Whittaker also had his most rushing attempts (57) and receptions (25) this season. He failed to get into the end zone, however, for the first time in his four-year career.

Michael Griffin, S, Carolina—Griffin led the Panthers with eight tackles in Sunday’s loss to the Bucs. He had 40 total tackles and a tackle for loss in 13 games this year. If he decides to return for more action next season, it will be as an unrestricted free agent. “We’ll see. Ten years is a blessing,” Griffin told the Charlotte Observer in December.

Hassan Ridgeway, DT, Indianapolis—Ridgeway made one tackle in the 24-20 win over the Jaguars. The rookie played in about 30 percent of the Colts’ defensive snaps this season, recording 21 tackles and 1.5 sacks.

Sam Acho, LB, Chicago—Acho made two tackles as the Bears were stomped 38-10 by the Vikings. He played in all 16 games this season, logging 27 tackles and one sack.

Marquise Goodwin, WR, Buffalo—Goodwin was targeted five times, catching one pass for just eight yards. He set career highs in receptions and yards as he caught 29 passes for 431 yards to go with three touchdowns. He’s an unrestricted free agent heading into the 2017 season.

Donald Hawkins, OT, N.Y. Jets—He hasn’t had any playing time since Week 10 and was signed by the Jets on Nov. 30 after being waived by the Panthers.

Malcolm Brown, RB, Los Angeles—Brown carried the ball five times for 11 yards and hardly saw the field as a backup to Todd Gurley this season. He averaged just 2.2 yards per carry on 18 attempts this season. He added three receptions for 46 yards.

Alex Okafor, LB, Arizona—Okafor played in 28 defensive snaps but failed to log a stat in the 44-6 trouncing of the Rams. He had 13 tackles and 3.5 sacks this season. He’ll be an unrestricted free agent entering the 2017 season.

Phil Dawson, PK, San Francisco—Dawson hit all three of his extra-point attempts in the 25-23 loss to the Seahawks. He made 18 of his 21 field goal attempts for 85.7 percent, with a long of 53 yards. He’s nearing 42 years old and he’s a free agent heading into next season, if he decides to keep playing.

Trey Hopkins, G, Cincinnati—The third-year lineman was moved up to the gameday roster and played in ten offensive snaps.

Tony Hills, OT, New Orleans—Hills was in on just one special teams snap for the Saints as they lost 38-32 to the Falcons.

Earl Thomas, S, Seattle—Thomas cracked his tibia on a play in the second quarter of Week 13’s win over the Panthers. After previously tweeting that he was contemplating retirement, Thomas put fans at ease when he tweeted on Christmas eve that he would return next season.

Jamaal Charles, RB, Kansas City—Charles was placed on injured reserve. He could have been activated in Week 17, but after the Chiefs activated Justin March-Lillard on Dec. 22 that move was off the table.  He won’t be available for the playoffs. He finishes the disappointing season having played in just three contests, rushing 12 times for 40 yards and a touchdown.

Quandre Diggs, CB, Detroit—Diggs was lost for the season in Week 13 due to a pectoral injury. Despite playing in four fewer games than his rookie season, he had six more tackles (44) for a new career high.

Geoff Swaim, TE, Dallas—Swaim suffered a torn pectoral muscle in Week 10. His season is over as his recovery time will be about four months. He made six catches for 69 yards, including three first downs this season.