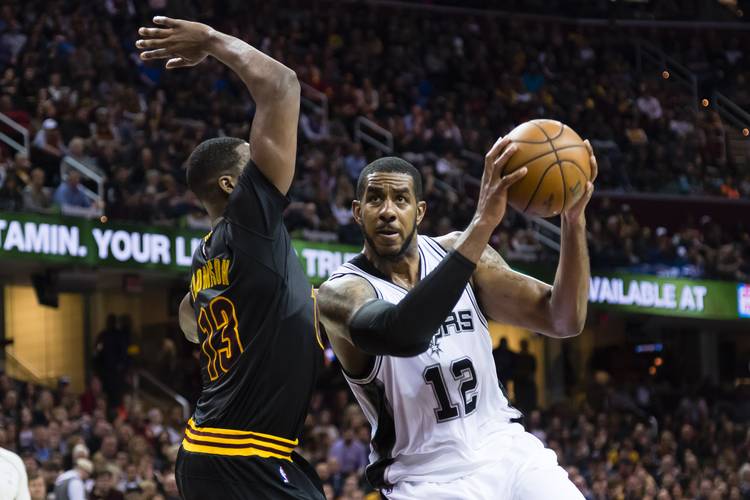 LaMarcus Aldridge #12 of the San Antonio Spurs posts up against Tristan Thompson #13 of the Cleveland Cavaliers during the second half at Quicken Loans Arena on January 21, 2017 in Cleveland, Ohio. The Spurs defeated the Cavaliers 118-115. (Photo by Jason Miller/Getty Images)

Kevin Durant, SF, Golden State—Last Friday Durant scored 32 as his Warriors defeated the Rockets 125-108. In back-to-back games against former teammates, Russell Westbrook and James Harden, Durant came out on top. Two nights later he scored just 15, but he added 10 rebounds and six assists as the Warriors handled the Magic easily 118-98. Golden State’s winning streak was halted at seven games when they fell to the Heat 105-102. Durant had 27 points but was just 1-for-8 from 3-point range. The Warriors bounced back with a win on Wednesday, topping the Hornets 113-103 as Durant scored 33 points to go with five boards and four blocks.

LaMarcus Aldridge, PF, San Antonio—Aldridge and the Spurs had won five in a row entering Friday. He scored 21 points and made seven rebounds in the 108-106 win over the Raptors on Tuesday. Before that he scored 16 points in back-to-back games against the Cavaliers and Nets. Aldridge’s double-double helped the Spurs take a 118-115 overtime win over the Cavs on Saturday. He had 12 rebounds in addition to six assists in the effort. On Monday he was one rebound short of a double-double as the Spurs knocked off the Nets 112-86. He had five assists in the game. He’s averaging 2.3 assists per game, that’s his most since the ’14-’15 season with the Trail Blazers.

LA with the nice dish, Kyle with the finish! pic.twitter.com/5cNoKTo4ag

Avery Bradley, PG, Boston—Bradley hasn’t played since Jan. 16th. He missed the next four games due to soreness in his Achilles. It’s not certain when he’ll return. He’s averaging 17.7 points per game and 6.9 rebounds.

Myles Turner, C, Indiana—Turner and the Pacers lost three straight before winning on Thursday over the Timberwolves. Turner had 14 points, four assists and three steals in the effort. He had back-to-back 20-point games for the second time this season. In Monday’s loss to the Knicks he scored 22 points to go with 10 rebounds and two blocks. In Saturday’s loss to the Jazz he had 13 points and seven boards. On the night before he scored 15 points, blocked two shots and made three steals. He’s had at least one block in 39 of his 44 games played.

Tristan Thompson, C, Cleveland—The Cavs had lost six of their last eight games entering Friday. Thompson has just two double-doubles in that stretch. He had one in the overtime loss to the Spurs last Saturday as he scored 14 points and made 12 rebounds. He followed that game up with two points and seven rebounds against the Pelicans. He had 6-and-8 against the Kings on Wednesday.

D.J. Augustin, PG, Orlando—Augustin had scored in double digits for three games in a row after last Friday’s win over the Bucks. He had 10 points and eight assists in the game. He played just five minutes and sprained his ankle against the Warriors on Sunday. He missed Tuesday’s loss to the Bulls but was expected to return Friday.

P.J. Tucker, SF, Phoenix—Tucker has scored in double digits in three out of his last four games. He scored 11 in Thursday’s loss to the Nuggets. He filled up the box score on Tuesday, scoring eight points, grabbing six boards, dishing out six assists and making four steals. The Suns lost to the Timberwolves 112-111, however. Tucker scored 11 points and collected 10 rebounds in Sunday’s win over the Raptors after scoring 15 points in the win over the Knicks on Sunday.