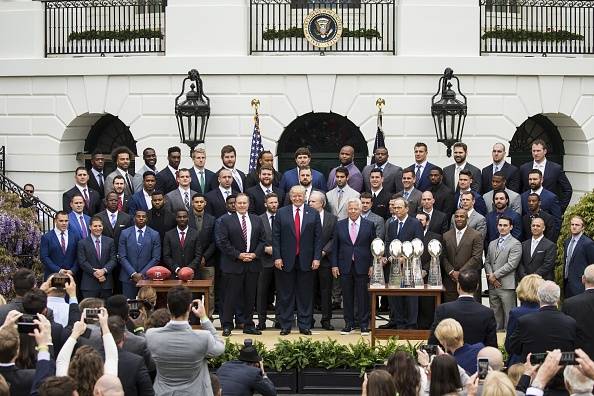 Players from the Super Bowl champion New England Patriots made the traditional visit this week to the White House.

But the trip made news mainly because of the many no shows.

Among the more than 30 players who didn’t make the trip was former Texas star Malcom Brown. He was the team’s first round draft pick in 2015, so he wasn’t on the roster the last time the Patriots journeyed to D.C. for a presidential Super Bowl celebration.

Former Texas A&M tight end Martellus Bennett also skipped the trip. He’d already said he wouldn’t go to the White House, telling reporters at Super Bowl media day: “I don’t support the guy that’s in the house.” Bennett, who played for the Aggies from 2005-07, has signed with Green Bay. Rather than appearing with his former Patriots teammates, Bennett spent the day in Los Angeles with comedian Chelsea Handler. He taped her talk show and spoke about making a positive impact on society.

Former Texas Tech star Danny Amendola also skipped the visit. President Donald Trump didn’t know of Amendola’s absence and mentioned the receiver in his remarks. Amendola tweeted that he was in the gym and that he would be attending a funeral later in the day.

The Big 12 was represented by former Kansas State fullback Glenn Gronkowski, who was on the Patriots practice squad last season. Gronkowski also is the younger brother of New England star Rob Gronkowski, who dropped in on Sean Spicer’s daily presidential briefing.

Tom Herman on leaving Houston for Texas: ‘I sleep so easy knowing that I never once lied to a player’

WATCH: Myles Turner dunks over another Texas Ex in a NBA playoff game