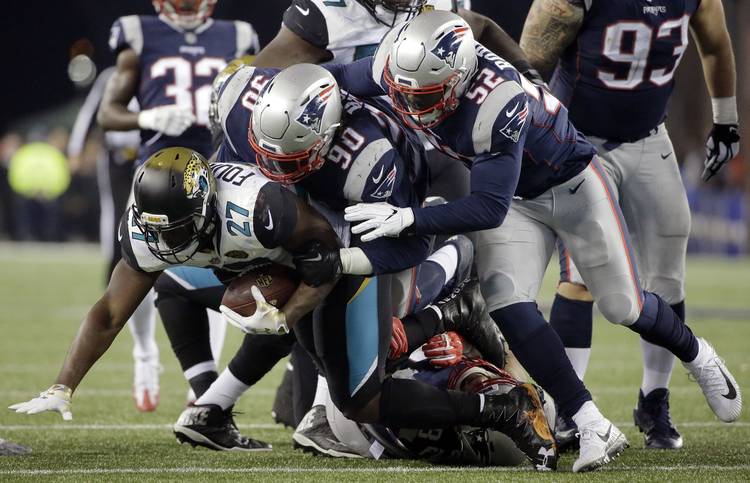 Is there such a thing as a former Longhorn? These players will always be Longhorns to University of Texas fans, even though they’ve graduated to the next level of football. Every week we’ll update you on how they performed the previous weekend. Here’s a look at the Longhorns in the NFL and how they fared in the conference championships.

There were just four former Longhorns in the NFL remaining in the playoffs entering conference championship week. Only Malcom Brown and Brian Robison suited up for their teams in those games.

The New England Patriots came back to defeat the Jacksonville Jaguars 24-20, allowing Brown to play in his second Super Bowl in just three years in the league. He has one ring with the Patriots already from Super Bowl LI and will go for his second against the Philadelphia Eagles. Brown made four tackles in the AFC conference championship on Sunday.

Robison and the Vikings weren’t so lucky. After Minnesota jumped out to a quick 7-0 lead, it was all Philadelphia after that. Robison had just one tackle in the surprising 38-7 blowout loss. Though the 34-year-old is still under contract through 2019, he said “no one knows what the future holds” in an Instagram post Tuesday. He also expressed his gratitude for the support he’s received during a very memorable season.

Been trying to gather my thoughts and emotions to say what I need to say….. Well this has been one great ride this year. It still hurts very much so and it’s hard to talk about or even think about how close we were. Even though we weren’t able to accomplish our final goal there are so many good things that created memories for a lifetime this season. Number 1, I want to thank God for the opportunities, the people and the gift of eternal life that I have. Number 2, I want to thank my family, friends, and everyone else who has supported me so graciously. •••2a••• thank you to the fishing world for showing such amazing support throughout this season Number 3, I want to thank the @vikings organization for putting together such an amazing Team and the opportunity to be here for it. Thank you to my teammates for putting up with me and being an extension of my family! I’d go into “battle” with you anyway! Number 4, I want to thank the Viking fans for being in full force this year and showing us so much support. I’m sorry we didn’t get it done for y’all this year as you deserve to be called champions. Last and definitely not least, I want to thank my wife and kids. You make it easy to go fight everyday for me to go out and strive for more. Y’all are my why and my everything for being who I am and doing what I do. I love y’all No one knows what the future holds, but one thing I know is I’ll cherish this season not only for the wins and losses, but for the men and women I shared it with. #nfl #minnesota #vikings #football #family #reelemin

Despite not playing on Sunday, Marcus Johnson and Jordan Hicks could win rings in Super Bowl LII. Johnson, an Eagles wide receiver who was inactive Sunday, hasn’t played since the final week of the regular season. Hicks ruptured his Achilles in Week 7, so he’s missed a lot of action. It’s the second time in his three-year career that he’s been unable to complete the season. If the Eagles can upset the Patriots on Feb. 4th, both can claim the title of Super Bowl champions.

Kevin Durant has a message for his hometown