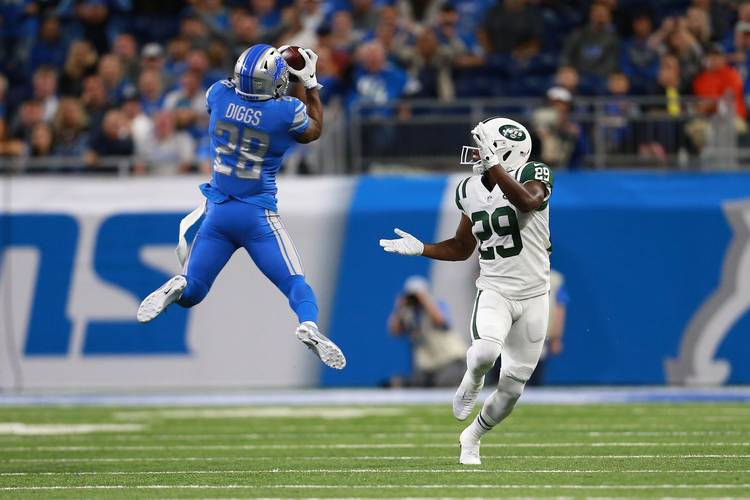 Quandre Diggs #28 of the Detroit Lions intercepts a pass intended for Bilal Powell #29 of the New York Jets in the first quarter at Ford Field on September 10, 2018. Diggs, now with the Seahawks, has has to change his normal workout regimen amid the coronavirus pandemic. (Photo by Rey Del Rio/Getty Images)

Is there such a thing as a former Longhorn? These players will always be Longhorns to University of Texas fans, even though they’ve graduated to the next level of football. Every week we’ll update you on how they performed the previous weekend. Here’s a look at the Longhorns in the NFL and how they fared in Week 1.

Officially 28 Longhorns are on NFL rosters and quite a few of them came up big for their teams in Week 1. Veteran cornerback turned safety Quandre Diggs had a big highlight on Monday Night Football. Diggs gave rookie QB Sam Darnold a little payback for knocking off his Longhorns around this time last year in Southern California. He welcomed Darnold to the NFL with a pick-six on the first play from scrimmage in Detroit. Diggs finished the game with four tackles and the score, but Darnold had the last laugh yet again. His Jets topped the Lions 48-17.

On the first play of the game…

One former Longhorn who came away with a win was Jordan Hicks. The fourth-year linebacker had a great game, leading the Eagles with 7 tackles while making 1.5 sacks in the 18-12 win over the Falcons Thursday. Two of his tackles went for a loss and he broke up a pass.

Another defender with a nice game was Earl Thomas, who had less than a week of practice before starting the game Sunday. He finished with five tackles and made an interception on the Broncos’ second possession. Thomas had been holding out but eventually decided against missing games. His Seahawks fell to the Broncos, 27-24, but it was a solid performance for the veteran.

If you thought we were done talking about Longhorns picking off quarterbacks in the NFL this weekend, think again. Kenny Vaccaro, on a team other than the Saints for the first time in his career, made a play to keep his Tennessee Titans alive in the fourth quarter against the Dolphins. Trailing 24-17 with 8:47 left in the game, Vaccaro tracked an errant pass by Ryan Tannehill and made the interception. The Longhorn won that battle with the Aggie, but the Dolphins eventually won 27-24. Vaccaro made five tackles in the loss.

Michael Dickson, punter for the Seahawks, had arguably the best game by a rookie Longhorn. He punted six times and averaged 57.5 yards per attempt. Even more impressive, he booted four punts inside the 20. Despite the 27-24 loss, the Seahawks will rely on the punter to help them pin opponents back all year. Below you can watch Dickson’s 69-yard punt versus Denver.

Another stellar special teams player that had a big day was Justin Tucker, the ever reliable kicker for the Ravens. Tucker made both of his field goals, a long of 41 yards, and connected on all five extra points in the 47-3 thrashing of the Bills.

One disappointing outcome from Sunday was the injury to Marquise Goodwin. He had a break out season last year and was looking to make an even bigger impact this season. Unfortunately he suffered a deep thigh bruise and was targeted just once in the 24-16 loss to the Vikings.

Adrian Phillips, CB, Chargers—2 tackles in 38-28 loss to the Chiefs.

Phil Dawson, K, Cardinals— No kick attempts in 24-6 loss to the Redskins.

Colt McCoy, QB, Redskins—No stats in 24-6 win over the Cardinals.

Malik Jefferson, LB, Bengals—DNP in 34-23 win over the Colts.

The Whys of Texas: Longhorns are trying to block out the tweets, distractions from 1-1 start