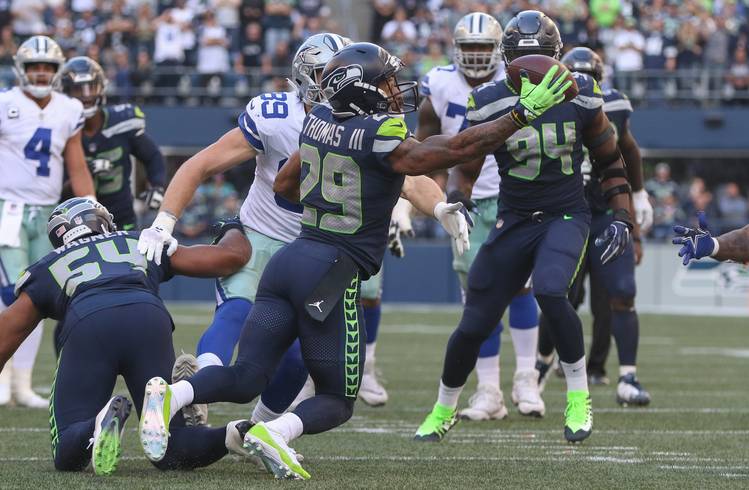 Free safety Earl Thomas #29 of the Seattle Seahawks intercepts a pass against tight end Blake Jarwin #89 of the Dallas Cowboys in the fourth quarter at CenturyLink Field on September 23, 2018 in Seattle, Washington. (Photo by Otto Greule Jr/Getty Images)

Earl Thomas doesn’t need to practice. The veteran staged a “hold-in” as he skipped multiple practices before helping the Seahawks defeat the Cowboys 24-13 in Week 3. Thomas recorded 7 tackles, but the highlights of his week were two interceptions against a team that could have traded for him in the offseason. Thomas famously visited the Cowboys locker room last season in hopes of convincing the team to go after him. After the Cowboys didn’t take him up on the offer, Thomas made them pay.

Thomas’ first-quarter pick was an impressive one as he pinned the ball against his leg after rookie receiver Michael Gallup tipped it in the air. Thomas posted a nice highlight reel of Sunday’s game on his Instagram account. His second pick came on another tip drill to seal the win. After the play Thomas took a bow, directed at the Cowboys’ sideline.

Marquise Goodwin missed the second week of the season due to a calf injury, but he made a good return to the field in Week 3. He made just 3 catches for 30 yards, but one went for a score. It wasn’t enough, however, as his 49ers lost to the high-scoring Chiefs, 38-27. Goodwin will now also be without the quarterback that has utilized him best. Jimmy Garoppolo tore his ACL in the game.

Marquise been stayin after practice for extra reps on this 😂😂😂 @marquisegoodwin pic.twitter.com/pqxnEWpBw6

Jordan Hicks continues to lead the Eagles defense, registering 8 tackles and 1.5 sacks in the 20-16 win over the Colts. Hicks leads Philadelphia with 24 total tackles this season. He’s also recorded a tackle for loss, three pass breakups and a fumble recovery.

Kenny Vaccaro is making the most of his time with the Titans. He made 4 tackles and recorded a sack in the 9-6 win over the Jaguars. Watch below as he prevents Blake Bortles from getting anything positive out of this pocket break down.

Second week in a row the #Titans DBs get a sack. Butler just missed but Vaccaro was right there to clean up Bortles pic.twitter.com/CPFtkbCiUc

Malcolm Brown continues to serve well as a backup to Todd Gurley. The former Longhorns running back had 5 carries for 42 yards in the 35-23 win over the Chargers. Brown has 93 yards rushing so far this season and is averaging a career-high 5.2 yards per carry.

Adrian Phillips, CB, Chargers—2 tackles in a 35-23 loss to the Los Angeles Rams.

Brian Orakpo, LB, Titans—2 tackles and a fumble recovery in the 9-6 win over the Jaguars.

Holton Hill, CB – Vikings—Played 20 snaps, 1 on defense and 19 on special teams, with no stats recorded in the 27-6 loss to the Bills.

Trey Hopkins, OG, Bengals—The Bengals rushed for just 66 yards but scored a touchdown on the ground in the 31-21 loss to the Panthers.

Connor Williams, G, Cowboys—The Cowboys rushed for 166 yards in the 24-13 loss to the Seahawks.

Sam Acho, LB, Bears—1 tackle in the 16-14 comeback win over the Cardinals.

Colt McCoy, QB, Redskins—Backed up Alex Smith in 31-17 win over the Packers.

Malik Jefferson, LB, Bengals—no stats in the 31-21 loss to the Panthers.

The Whys of Texas: Defensive tackle Chris Nelson’s belly-rubbing days may be over