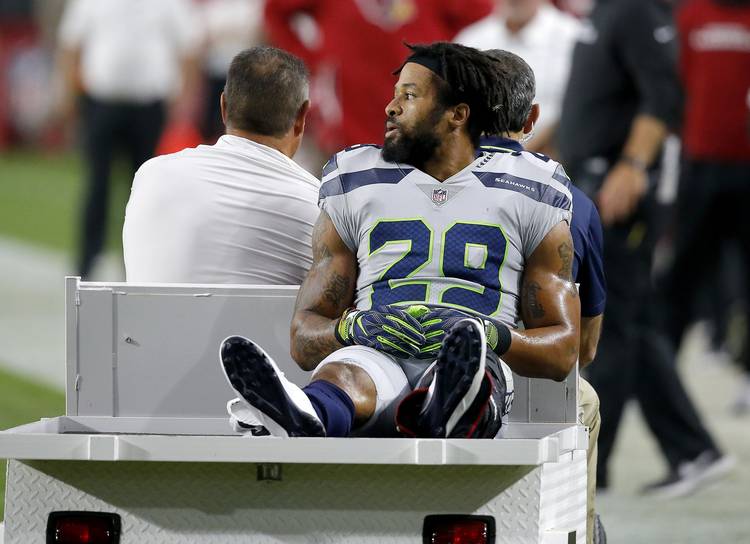 Seattle Seahawks defensive back Earl Thomas (29) leaves the field after breaking his leg against the Arizona Cardinals during the second half of an NFL football game, Sunday, Sept. 30, 2018, in Glendale, Ariz. The Seahawks won 20-17. (AP Photo/Ross D. Franklin)

Week 4 was not kind to former Longhorns who played defensive back. Three Texas exes were injured Sunday and will be out multiple weeks, if not the remainder of the season. The biggest injury went to Earl Thomas. The All Pro suffered a fractured leg and will be gone for the rest of the season, officially placed on injured reserve Tuesday. Thomas had made four tackles on the day and was trying to break up a pass in the fourth quarter of the 20-17 win over the Cardinals when he suffered the injury. As he was carted off the field, he gave his sideline the one-finger salute. Thomas held out during training camp, but eventually joined the Seahawks after a new contract couldn’t be worked out. He eventually skipped some practices as a cautionary measure, but the in-game injury leaves him without a new contract and rehab ahead.

Quandre Diggs also broke a bone Sunday as his Lions fell to the Cowboys 26-24 on a last-second field goal. Diggs made four tackles in the game, but suffered a break in his hand, according to Ian Rapoport of the NFL Network. It’s unclear how much time, if any, Diggs will miss. He’s third on the team in tackles with 16 while tied for the lead in pass breakups (4) and interceptions (1). Diggs has scored the only defensive touchdown for the Lions so far this season.

On the bright side for former Longhorns, tight end for the Cowboys Geoff Swaim made three catches for 39 yards and scored his first career touchdown in the win. With the retirement of Jason Witten, Swaim has already recorded career highs in catches (11) and yards (104) for the season. Swaim’s touchdown was a big score as it extended the Cowboys’ lead to 10 points late in the third quarter.

Also in that game, Connor Williams helped Ezekiel Elliott gain 240  yards from scrimmage, including this 38-yard screen pass for a touchdown. Watch the left guard, No. 52, get down the field and make a block to help Elliott reach the end zone.

.@EzekielElliott to the 🏡
38yd run for the #DallasCowboys score! #DETvsDAL

RT if you want to keep seeing this #CowboysNation pic.twitter.com/V5P8kx2nvC

Derrick Johnson, LB, Raiders—3 tackles in the 45-42 win over the Browns.

Kenny Vaccaro, S, Titans—2 tackles in the 26-23 win over the Eagles. Another defensive back casualty of Week 4, he suffered a dislocated elbow in the contest but should miss only a few weeks.

Trey Hopkins, OG, Bengals—Helped the Bengals rush 99 yards and score 2 TDs on the ground in the 37-36 win over the Falcons.

Colt McCoy, QB, Redskins—McCoy and the Redskins were on bye in Week 4.

Phil Dawson, K, Cardinals—A rough day for the veteran, making just 1 of 3 field goal attempts. He missed a late opportunity to give the Cardinals the lead before they eventually fell 20-17 to the Seahawks.

Malcom Brown, DT, Patriots—Didn’t record a stat in the 38-7 win over the Dolphins.

Malik Jefferson, LB, Bengals—Didn’t record a stat in the 37-36 win over the Falcons.

Malcolm Brown, RB, Rams—Didn’t record a stat in the 38-31 win over the Vikings.

Poona Ford, DT, Seahawks—Didn’t record a stat in the 20-17 win over the Cardinals.

Sam Acho, LB, Bears—Didn’t record a stat in the 48-10 win over the Buccaneers.

Hassan Ridgeway, DT, Colts—DNP, inactive in the 37-34 loss to the Texans.