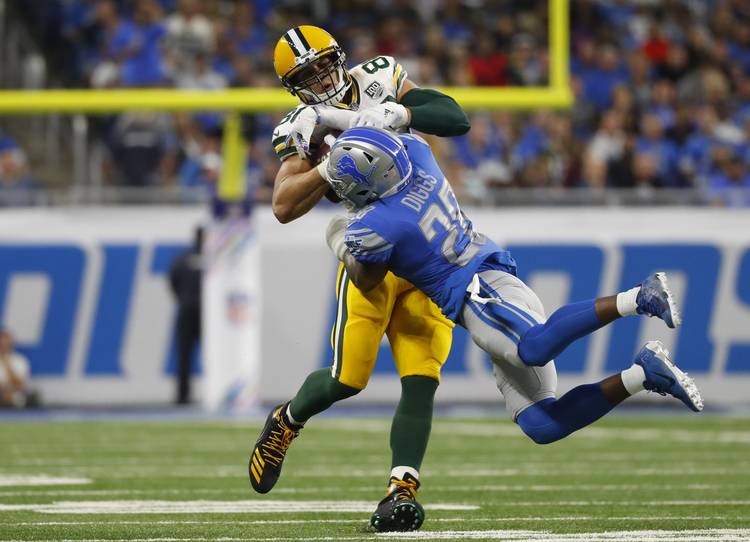 Despite playing with a fractured hand in a cast, Quandre Diggs was second on his team in tackles with 10 in the 31-23 win over the Green Bay Packers. He’s third on the team in tackles this season with 26 to go along with four passes defended and an interception returned for a touchdown. Diggs signed a three-year contract extension early in September, proving that his switch to strong safety is worth an investment.

Jordan Hicks continues to be another top defensive performer representing UT in the NFL. He led the Eagles with nine tackles and a tackle for loss in the 23-21 defeat to the Minnesota Vikings. Hicks leads the Eagles with 40 tackles to go with 1.5 sacks and a fumble recovery.
Advertisement
Geoff Swaim is second on the Dallas Cowboys with 159 yards receiving. He added three catches and 55 yards in the 19-16 overtime loss to the Houston Texans. Swaim had a couple impressive plays as he led the Cowboys in receiving yardage, despite the loss. On one reception he put the clamps on a low fast ball from Dak Prescott. On another he gained 43 yards on a screen.

Adrian Phillips made six tackles and broke up a pass in the Chargers’ 26-10 win over the Oakland Raiders. The Chargers have won three out of four games and next travel to Cleveland to take on rookie Baker Mayfield and the Browns.

More Adrian Phillips. Chargers in dime, Raiders with empty backfield with Doug Martin split wide right. Martin runs a quick slant underneath clear out routes. Phillips closes quickly and breaks up the pass from behind. pic.twitter.com/m0wkoIDa19

— The Lightning Round Podcast (@Lightning_Round) October 8, 2018

Connor Williams, G, Cowboys—98 team rushing yards during the 19-16 loss to the Texans.

Trey Hopkins, OG, Bengals—103 team rushing yards in the 27-17 win over the Dolphins.

Derrick Johnson, LB, Raiders—Didn’t log a stat and played on just 28 percent of defensive snaps in the 26-10 loss to the Chargers.

Malcolm Brown, RB, Rams—He didn’t play on any offensive snaps but made a tackle during his 14 special teams snaps in the 33-31 win over the Seahawks.

Alex Okafor, DE, Saints—He played on 70 percent of the defensive snaps but didn’t log a stat in the 43-10 win over the Redskins.

Holton Hill, CB, Vikings—He played on three defensive snaps and 19 special teams plays in the 23-21 win over the Eagles.

Marquise Goodwin, WR, 49ers—DNP, recovering from quad and hamstring injuries as the 49ers lost 28-18 to the Cardinals.

Colt McCoy, QB, Redskins—DNP, backed up Alex Smith in the 43-10 loss to the Saints.

Hassan Ridgeway, DT, Colts—DNP, recovering from calf injury as the Colts lost 34-28 to the Patriots. He returned to practice Monday.

Malik Jefferson, LB, Bengals—DNP, inactive for the 27-17 win over the Dolphins. He’s yet to play a snap on defense this season.

Sam Acho, LB, Bears—Acho and the Bears were on bye in Week 5.

Earl Thomas, S, Seahawks—IR, was fined for Week 4 gesture toward own sideline.

The Whys of Texas: TCU’s the reason why officials removed OU’s Marquise Brown vs. UT