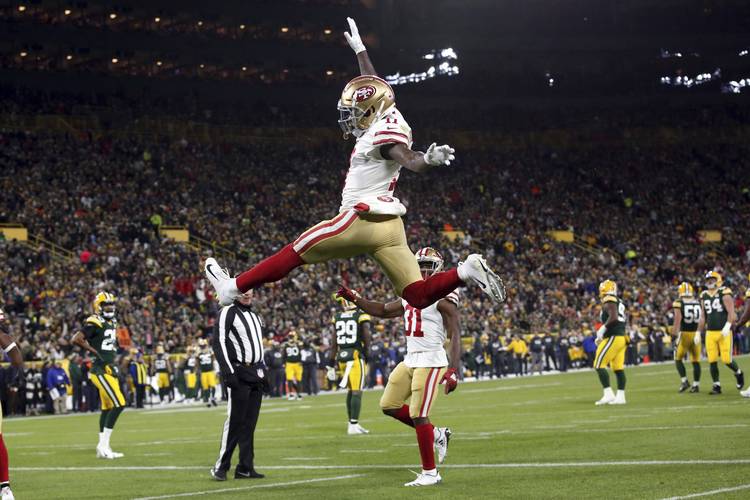 After last season, we ranked the Longhorns in the NFL and 49ers wide receiver Marquise Goodwin topped the list after a breakout year. This season has been somewhat disappointing as Goodwin has dealt with some injuries and even lost his starting quarterback to a torn ACL. Monday night’s performance was a good sign that his season isn’t lost, though. Goodwin caught four passes for 128 yards and scored twice as the 49ers came up just shy of upsetting the Packers in Green Bay.

Goodwin got the 49ers back in the game on his first touchdown catch, a 67-yard bomb from C.J. Beathard that left Packers fans dumbfounded. The former track and field star eventually gave the 49ers the lead on a 35-yard score in the second quarter. He celebrated as only an Olympic long jumper could.

On the defensive side of the ball, Jordan Hicks continued to lead the Eagles defense as Philadelphia defeated the Giants 34-13. Hicks tied for the team lead with 10 tackles and made a pass deflection that ended up in a turnover. He leads the Eagles with 50 tackles on the season.

Tyrone Swoopes was added to the Seahawks active roster this week and made a catch for 23 yards on the team’s opening drive. That’s the only reception he made, but with Seattle’s tight ends dealing with injuries, Swoopes could end up with more playing time. Once he caught the pass it looked a little like the 18-Wheeler package the Longhorns ran a few years ago. His Seahawks dominated the Raiders, winning 27-3.

Another former Longhorn playing tight end in the NFL is Geoff Swaim of the Cowboys. He had just 2 catches for 21 yards in the big 40-7 over the Jaguars. Swaim isn’t lighting it up in terms of receptions and yards, but not many Cowboys are doing that at all, Cole Beasley’s big week notwithstanding. Swaim has proven valuable, however, making big blocks and hauling in passes whenever targeted.

Marcus Johnson gained some value as a receiver for the Colts, making two catches for 52 yards and scoring a touchdown in the 42-34 loss to the Jets on Sunday. But that ended when a late hit out of bounds cut his season short. Johnson was returning a squib kick late in the game when the injury occurred. The hit tore a ligament in Johnson’s ankle and will keep him out for the rest of the season. Earlier Johnson hooked up with Andrew Luck on a 34-yard score.

Derrick Johnson, LB, Raiders—3 tackles in the 27-3 loss to the Seahawks.

Adrian Phillips, CB, Chargers—2 tackles, 2 passes defended in the 38-14 win over the Browns.

Malik Jefferson, LB – Bengals—2 tackles in the 28-21 loss to the Steelers.

Poona Ford, DT, Seahawks—2 tackles in the 27-3 win over the Raiders.

Trey Hopkins, OG, Bengals—62 team rushing yards in the 28-21 loss to the Steelers.

Jamaal Charles, RB, Jaguars— 5 rushes, 5 yards in his debut with the Jaguars.

Holton Hill, CB, Vikings—Didn’t record a stat in the 27-17 win over the Cardinals.

Colt McCoy, QB, Redskins—Backed up Alex Smith in the 23-17 win over the Panthers.

Quandre Diggs, CB, Lions— Diggs and the Lions were on bye.

Alex Okafor, DE, Saints—Okafor and the Saints were on bye.

Malcom Brown, DT, Patriots— DNP as he recovers from a knee injury. His Patriots outlasted the Chiefs, 43-40.

Kenny Vaccaro, S, Titans— DNP, dealing with an elbow injury. The Titans were shut out by the Ravens, 21-0.

D’Onta Foreman, RB, Texans— Week 7 is the first week Foreman is eligible to be added to the active roster, but the Houston Chronicle reported that was unlikely this week. His Texans, which could use help at the position, beat Buffalo 20-13.