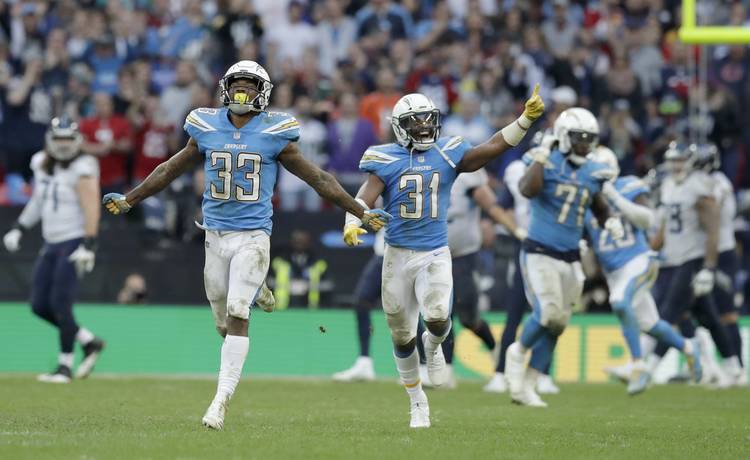 Los Angeles Chargers defensive back Adrian Phillips (31) and free safety Derwin James (33) celebrate after a successful defensive play near the end of the second half of an NFL football game against Tennessee Titans at Wembley stadium in London, Sunday, Oct. 21, 2018. Los Angeles Chargers won the match 20-19. (AP Photo/Matt Dunham)

Adrian Phillips continues to play well as his Chargers moved to 5-2 with a heart-stopping win over the Titans in London on Sunday. Phillips came up big in the contest, knocking away the potential game-winning 2-point conversion. He finished with seven tackles, second best on the team, and a tackle for loss. His game-saving pass breakup came after he had left the game for a period due to an ankle injury. Phillips was questionable to return but got back in the game and ended up helping seal the win.

"You see everybody in here jumping around. The defense jumping with the offense. This is the most connected team that I’ve ever been on."

Another defensive back who helped his team win, Holton Hill, made his first career interception in the Vikings’ 37-17 win over the N.Y. Jets. He also had 3 tackles and broke up two passes. Hill added two kickoff returns for 57 total yards. Check out the rookie’s first pick on his first play, subbing for an injured Xavier Rhodes below.

Hill and the Vikings defense will have their hands full next week, facing Drew Brees and the Saints.

Another Longhorn who experienced a first, Justin Tucker, did something he hadn’t since high school, unfortunately. The Ravens kicker made his only field goal attempt but missed an extra point for the first time in his career that would have tied the game with the Saints with 24 seconds left in regulation. It was the first missed extra point for Tucker since his junior year in high school, according to Peter King. New Orleans won 24-23 and Tucker felt compelled to speak on the miss after the game.

Justin Tucker says he asked to be at the podium after missing the extra-point attempt that sealed the #Ravens’ loss. pic.twitter.com/n1uSo4DPvw

Tucker and the Ravens will try to get back on the winning track when they face Carolina on the road next week.

Hassan Ridgeway, DT, Colts—2 tackles, 1 tackle for loss in the 37-5 win over the Bills.

Colt McCoy, QB, Redskins—Backed up Alex Smith in the 20-17 win over the Cowboys.

Kenny Vaccaro, S, Titans— DNP as he’ll use the Week 8 bye to recover from an elbow injury.

D’Onta Foreman, RB, Texans— Week 7 was the first week Foreman was eligible to be added to the active roster. His Texans, which could use help at the position, beat Jacksonville 20-7 without him.

With Cowboys on deck, Collin Johnson discusses what he learned from last year’s benching