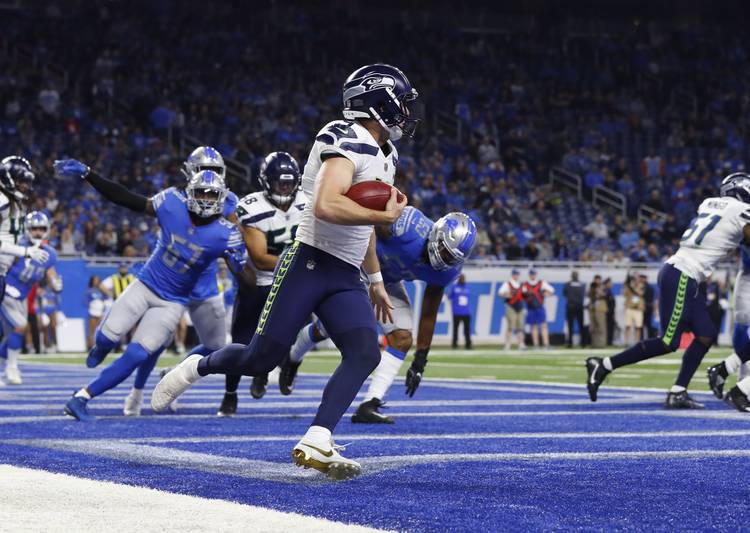 Seattle Seahawks punter Michael Dickson (4) runs out of the end zone for a first down during an NFL football game against the Detroit Lions in Detroit, Sunday, Oct. 28, 2018. (AP Photo/Paul Sancya)

NFL play-by-play and color commentators have grown used to the punting ability of rookie Michael Dickson. He’s third in the league in net average at 42.5 yards per punt and has even tried a few dropkicks. But Dickson showed them a highlight they haven’t seen before in the 28-14 win over Detroit Sunday. Up two touchdowns late in the game, Dickson was ready to take an intentional safety to avoid a potential blocked punt, preserving a big lead for the Seahawks. When Dickson began to run around the right side of the end zone he saw a big opening and decided to make a run for it. He picked up the eight yards necessary for the first down to help his team put the game on ice. Dickson was also useful in his usual capacity, averaging 49.5 yards per punt on four attempts with one landing inside the 20.

The improvisational skills and sheer bravery to go for the first down has earned him a new nickname.

Dickson later clarified to SB Nation’s fieldgulls.com that that’s what his teammates were calling him at the moment he gave the quote. We’ll see if the nickname sticks.

Marquise Goodwin is the former Longhorn that had the biggest offensive play of the week. He caught just one pass in the 49ers’ 18-15 loss to the Cardinals, but it went for 55 yards and a touchdown.

HE'S SO FAST!@marquisegoodwin to the house 🔥

Goodwin beat Patrick Peterson on a slant and raced half the length of the field to put the 49ers up by eight points in the third quarter. The score set a career-high for touchdowns in a season for Goodwin, bringing his total to four this year.

Jordan Hicks also added to a career-high Sunday, making 1.5 sacks to bring his total to 3 for the year. He had never had more than one sack in a season as a pro. He led the Eagles with 12 tackles in the 24-18 win over the Jaguars in London. Hicks leads the team in tackles for the year with 70 while the next closest teammate is Jalen Mills with 43 stops.

Malcom Brown, DT, Patriots—1 tackle in the 25-6 win over the Bills.

Malik Jefferson, LB – Bengals—22 special teams snaps in the 37-34 win over the Buccaneers.

Colt McCoy, QB, Redskins—He backed up Alex Smith in the 20-13 win over the Giants. His Redskins are 5-2 in first place of the NFC East.

Derrick Johnson, LB, Free Agent—Requested his release from Raiders and was granted it before the Week 7 bye.

Tyrone Swoopes, TE, Seahawks—Released by Seahawks on Oct. 27 and cleared waivers two days later. He signed with the practice squad on Tuesday.

Hassan Ridgeway, DT, Colts—Inactive in the 42-28 win over the Raiders.

D’Onta Foreman, RB, Texans— PUP. Week 7 was the first week Foreman was eligible to be added to the active roster. His Texans beat the Dolphins 42-23.