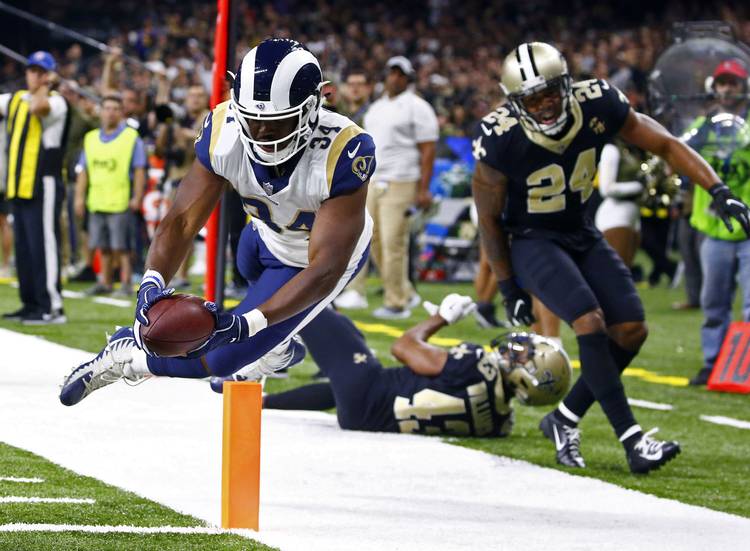 There are a lot of former Longhorns playing defense in the NFL, but the highlight of the week goes to one of the few former Longhorns playing offense.  Malcolm Brown had just one touch in the big matchup between the Los Angeles Rams and the New Orleans Saints on Sunday night, but he made it count. The Rams trailed by 18 points before Jared Goff found Brown on the left side of the field. The running back made the catch and made a spectacular play to stay in bounds on the sideline in order to score and cut the lead to 35-23. The Rams eventually tied the game at 35-35 before the Saints pulled out the 45-35 win.

Kenny Vaccaro returned to action in Week 9 after dealing with an elbow injury since September. He contributed  six tackles in the 28-14 win over the Cowboys. Vaccaro’s run support helped the Titans hold the Cowboys to just 72 yards rushing. They held Ezekiel Elliott to just 61 yards and 3.6 yards per carry.

A teammate of Vaccaro’s, Brian Orakpo, didn’t register a lot of stats. He did, however, log his first sack of the season, two quarterback hits and a batted pass in the win.

Adrian Phillips, CB, Chargers—6 tackles in the 25-17 win over the Seahawks.

Quandre Diggs, CB, Lions—4 tackles in the 24-9 loss to the Vikings.

Malcom Brown, DT, Patriots—2 tackles and a half tackle for loss in the 31-17 win over the Packers.

Connor Williams, G, Cowboys—19 rushing attempts for 72 team rushing yards and five team sacks given up in the 28-14 loss to the Titans.

Colt McCoy, QB, Redskins—Backed up Alex Smith in the 38-14 loss to the Falcons.

Poona Ford, DT, Seahawks— Inactive in the 25-17 loss to the Chargers

D’Onta Foreman, RB, Texans— PUP. Week 7 was the first week Foreman was eligible to be added to the active roster. His Texans beat the Broncos 19-17.