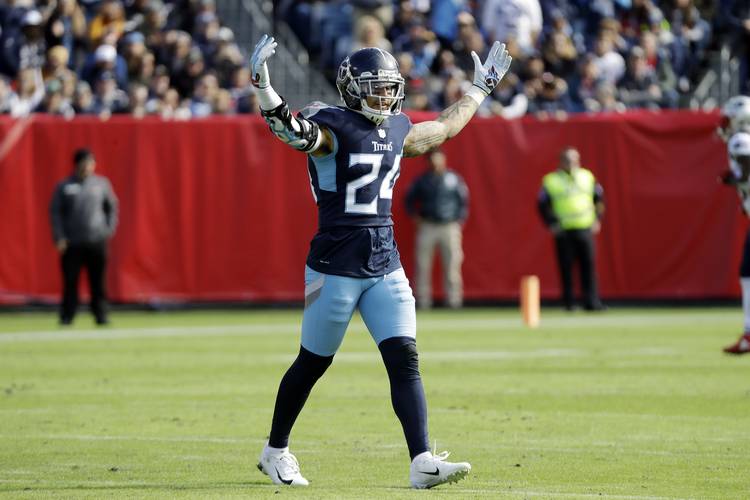 Tennessee Titans strong safety Kenny Vaccaro (24) celebrates after a play against the New England Patriots in the first half of an NFL football game Sunday, Nov. 11, 2018, in Nashville, Tenn. (AP Photo/James Kenney)

Week 10 was a big week for upsets. A pair of former Longhorns, Kenny Vaccaro and Brian Orakpo, played their part in the biggest one of the day as the Titans surprised the New England Patriots, 34-10. Vaccaro had five tackles and this great hit for a tackle for loss.

Kenny Vaccaro tackles James White for the loss and he got….JACKED UP!!!! pic.twitter.com/EyqiOgrSXJ

Marquise Goodwin made four catches for 69 yards in a 27-23 loss to the Giants on Monday night, but he made a highlight in the pregame warmup. Goodwin and counterpart Odell Beckham Jr. had a playful moment with Goodwin’s sister, Deja, who is confined to a wheelchair due to cerebral palsy, on the sideline. The two had a mini dance-off and later signed and swapped jerseys after the game.

Michael Dickson keeps proving why he was a fifth round pick of the Seattle Seahawks. He had a strong game in the 36-31 loss to the Rams. Dickson did his part, averaging 55 yards per punt and landing one inside the 20. It was actually inside the 5-yard line. Dickson is now tied for the league lead in punt net average at 43.8 yards per punt. Here’s former NFL punter Pat McAfee losing his mind over Dickson’s perfect punt late in the first half.

The Los Angeles Chargers are in the midst of a six-game winning streak after beating the Raiders 20-6 Sunday. Adrian Phillips had a productive day, making nine tackles and defending a pass. He was in on a play that set the tone for the game, stopping the Raiders on a fourth-and-goal situation. Phillips wasn’t the first guy in on the play, but he made sure the Raiders came way empty on the possession.

Trey Hopkins, OG, Bengals—The entire team had a dreadful time in the 51-14 loss to the Saints.

Malik Jefferson, LB, Bengals—3 tackles in the 51-14 loss to the Saints.

Colt McCoy, QB, Redskins—Backed up Alex Smith in the 16-3 win over the Buccaneers.

Holton Hill, CB, Vikings—Hill and the Vikings were on bye in Week 10.

Justin Tucker, K, Ravens—Tucker and the Ravens were on bye in Week 10.

Connor Williams, G, Cowboys—He had arthroscopic surgery on his right knee last week. The Cowboys beat the Eagles 27-20 without him, but he could return as soon as Week 11.

D’Onta Foreman, RB, Texans— Officially taken off PUP list Tuesday. Week 7 was the first week Foreman was eligible to be added to the active roster. His Texans were on bye in Week 10. He still hasn’t started officially practicing yet, but it’s looking like that could start this week.