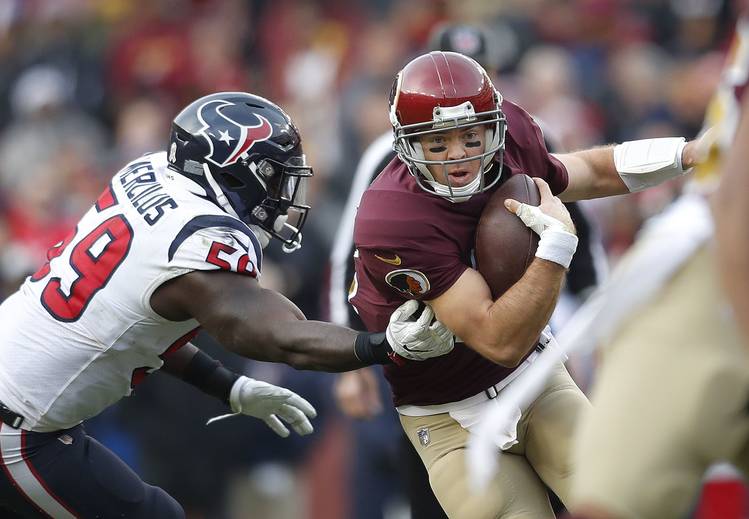 Washington Redskins quarterback Colt McCoy (12) runs with the ball past Houston Texans outside linebacker Whitney Mercilus (59) during the second half of an NFL football game against the Houston Texans, Sunday, Nov. 18, 2018, in Landover, Md.(AP Photo/Pablo Martinez Monsivais)

An eerie and gruesome injury to Alex Smith has set the stage for Longhorn legend Colt McCoy to start on Thanksgiving against the Cowboys in Dallas. Before McCoy had to enter the game for Smith against the Texans, he hadn’t thrown a pass in a game since 2015. McCoy finished the game 6 for 12 for 54 yards and a touchdown pass while rushing for 35 yards on five carries. Smith was picked off twice before he suffered a broken leg, coincidentally on the 33rd anniversary of Joe Theismann’s similar injury. McCoy’s third-quarter touchdown pass to Jordan Reed helped the Redskins get back into the game, though they fell short, 23-21.

The last time McCoy played against the Cowboys he subbed in for Kirk Cousins on the way to a 34-23 win. McCoy had a 71-yard touchdown pass in that 2015 contest. The only other time he faced the Cowboys he played a much larger role, throwing for 299 yards on 25 of 30 passing and scoring on the run in the 20-17 overtime win.

Just for the hell of it, last time Colt McCoy played the Cowboys in prime time, he did this #Redskins pic.twitter.com/JKUKKP5mPV

McCoy signed an extension in the offseason, making it clear that he was a valued backup.

The Saints trounced the defending champion Eagles 48-7 and it clearly wasn’t just due to a strong offensive game. Alex Okafor had a role in the strong defensive effort. He made  two tackles, had a sack and a tackle for loss. Okafor has played in 10 games this season, matching last year’s game total before he tore his Achilles. He has fewer tackles (19) at this point but has still logged three sacks. Last season he finished with 43 tackles and 4.5 sacks.

Justin Tucker had a great game in the 24-21 win over the Bengals. He made all three of his extra-point attempts and connected on a 56-yard field goal just before the end of the first half.

Adrian Phillips, CB, Chargers—6 tackles in the 23-22 loss to the Broncos.

Jordan Hicks, LB, Eagles—7 tackles in a 48-7 loss to the Saints. Hicks is week-to-week with a calf injury.

Quandre Diggs, CB, Lions—2 tackles in the 20-19 win over the Panthers.

Malik Jefferson, LB, Bengals—2 tackles in the 24-21 loss to the Ravens.

Trey Hopkins, OG, Bengals—48 team rushing yards in the 24-21 loss to the Ravens.

Brian Orakpo, LB, Titans—No stats registered in the 38-10 loss to the Colts.

Connor Williams, G, Cowboys—He had arthroscopic surgery on his right knee two weeks ago. The Cowboys topped the Falcons 22-19.

Malcom Brown, DT, Patriots—Brown and the Patriots were on bye in Week 11.

D’Onta Foreman, RB, Texans—He has to be active soon, as he’s started practicing, in order to be eligible to play this season. The Texans beat the Redskins 23-21.

Phil Dawson, K, Cardinals—Inactive (hip) for the 23-21 loss to the Raiders.

Poona Ford, DT, Seahawks—Inactive for the 27-24 win over the Packers.

Hassan Ridgeway, DT, Colts—Inactive for the 38-10 win over the Titans.

Preview: Texas vs. No. 7 North Carolina