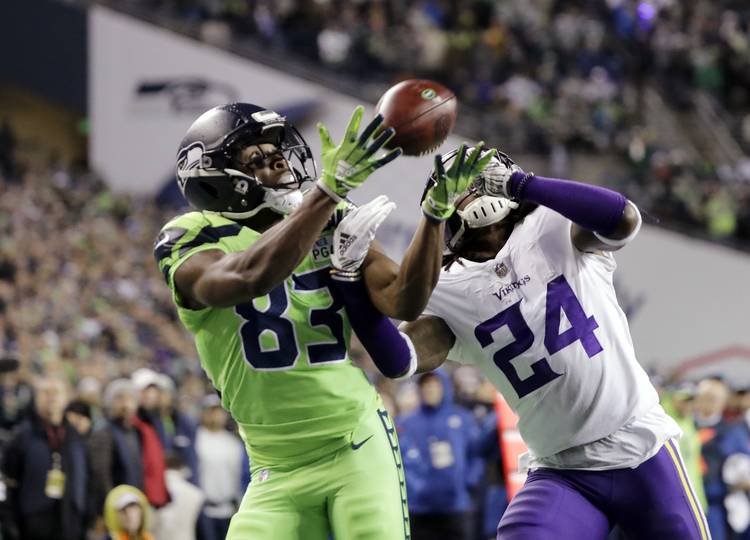 Seattle Seahawks receiver David Moore (83) reaches for the ball as Minnesota Vikings' Holton Hill defends near the end of the first half of an NFL football game, Monday, Dec. 10, 2018, in Seattle. Moore made the catch but was ruled out of bounds. (AP Photo/Ted S. Warren)

Holton Hill got the start for the Vikings on Monday night and played very well. He made eight tackles and broke up a pass in the 21-7 loss to the Seahawks. Hill helped the Vikings hold Russell Wilson to a career-low 72 yards passing.

Another week, another big Quandre Diggs big-hit highlight. There wasn’t much special about the Lions’ 17-3 win over the lowly Cardinals, but Diggs is still bringing the wood against opponents. He finished the game with four tackles and a tackle for loss.

Quandre Diggs is a wrecking ball! (Sound up) pic.twitter.com/BeGEAR8FhC

Adrian Phillips made five tackles, one for loss, in the Chargers 26-21 win over the Bengals. He also broke up a pass. The safety has found himself lining up as a linebacker at times, making plays on the inside against much larger opponents. Take a look at the work he did two weeks ago against the Steelers.

plays like this are why it's easy to root for adrian phillips. 205 lbs soaking wet and plays in the box against guys 100 lbs heavier than him quite a bit pic.twitter.com/YPQhwHVfTj

Another safety who often finds himself playing like a linebacker is Kenny Vaccaro. He made four tackles and broke up a pass in the 30-9 win over the Jaguars. Here Vaccaro makes a stop on Leonard Fournette, and manages to share the credit for the play on Twitter.

@RealLoganRyan jammed his guy up to allow me to make the play🤙🏽 https://t.co/txCr1UUNqT

Alex Okafor, DE, Saints—4 tackles in the 28-14 win over the Buccaneers.

Trey Hopkins, OG, Bengals— Helped the Bengals rush for 144 yards in the 26-21 loss to the Chargers.

Malcom Brown, DT, Patriots—2 tackles in the 34-33 loss to the Dolphins.

Poona Ford, DT, Seahawks—1 tackle in the 21-7 win over the Vikings.

Brian Orakpo, LB, Titans—1 tackle in the 30-9 win over the Jaguars.

Connor Williams, G, Cowboys—Helped the Cowboys rush for 142 yards in the 29-23 win over the Eagles.

Malik Jefferson, LB, Bengals—Didn’t record a stat in the 26-21 loss to the Chargers.

D’Onta Foreman, RB, Texans—DNP-inactive for the 24-21 loss to the Colts, came off PUP list.

Geoff Swaim, TE, Cowboys—DNP in the 29-23 win over the Eagles due to a wrist injury.

Jordan Hicks, LB, Eagles—DNP in the 29-23 loss to the Cowboys due to a calf injury.

Hassan Ridgeway, DT, Colts—DNP in the 24-21 win over the Texans.