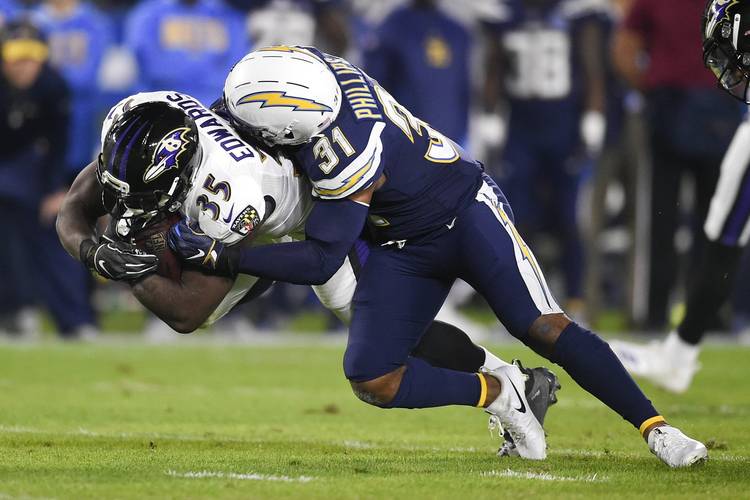 Baltimore Ravens running back Gus Edwards is tackled by Los Angeles Chargers defensive back Adrian Phillips during the first half in an NFL football game Saturday, Dec. 22, 2018, in Carson, Calif. (AP Photo/Kelvin Kuo)

Texas has often been referred to as DBU, a result of the success of a number of Longhorns in the NFL playing defensive back.

It’s starting to look like they’ll be able to add “Special Teams U” to their list of nicknames after the Associated Press named three Longhorns to the NFL’s All-Pro first team.

This makes three first team All-Pro selections for Tucker, the reliable Ravens kicker. He went 35 for 39 on field goals and missed an extra point for the first time in his career. Tucker went 5 for 7 on field goals beyond 50 yards. One of those misses was on a 65-yard attempt which would have broken the NFL record. Tucker was 9 for 11 on field goals from 40-49 yards and was perfect on field goals shorter than that.

Dickson averaged 48.2 yards per punt with a long of 69 yards. He also had 28 punts land inside the 20-yard line. Dickson joins three other rookies selected to the first team. He impressed all season long and even managed a couple of drop kicks on kickoffs. Dickson also rushed for a first down deep in his own territory to secure a win for Seattle in Week 8.

Dickson and Phillips were previously named to the Pro Bowl.