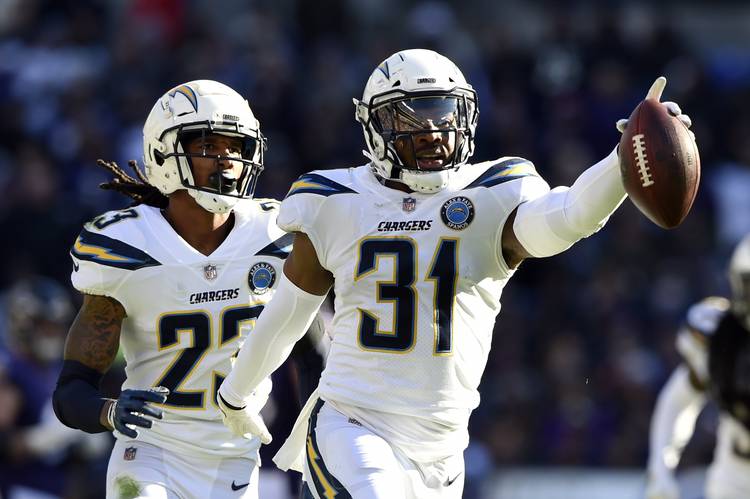 Los Angeles Chargers defensive back Adrian Phillips, right, celebrates with teammate Rayshawn Jenkins after intercepting a pass in the first half of an NFL wild card playoff football game against the Baltimore Ravens, Sunday, Jan. 6, 2019, in Baltimore. (AP Photo/Gail Burton)

Is there such a thing as a former Longhorn? These players will always be Longhorns to University of Texas fans, even though they’ve graduated to the next level of football. Every week we’ll update you on how they performed the previous weekend. Here’s a look at the Longhorns in the NFL and how they fared in Wild Card weekend.

Adrian Phillips likely had the best week among the former Longhorns playing in Wild Card weekend. Phillips and the Chargers put on a dominating performance before a late surge helped the Ravens make the game close. He had five tackles, broke up three pass plays and recovered a fumble in the 23-17 victory. Phillips also had an interception in the second quarter.

Connor Williams got the start for his first playoff game and helped the Cowboys pick up a 24-22 win at home. The Cowboys rushed 34 times for 164 yards. Sixteen of those yards came on this crucial 3rd and 14 play in which Williams opened things up for Dak Prescott.

This was quite a run by Dak Prescott on 3rd and 14. Basically, the game-winner. pic.twitter.com/zBeC7AYpq4

Williams also had some success on the move.

Look at Connor Williams getting to Bobby Wagner in space!!! pic.twitter.com/h4qARSFJ0S

Jordan Hicks returned to action in Week 16 and the Eagles haven’t lost since. Though he’s played a limited role, he’s still contributing. Hicks had three tackles and a tackle for loss in the upset win over the Bears. Philadelphia won 16-15 in Hicks’ playoff debut. He missed last season’s Super Bowl run due to injury.

Also victorious on the road, Hassan Ridgeway and the Colts dealt the Houston Texans a 21-7 loss. Ridgeway finished with two tackles and a half sack as the Texans had trouble protecting Deshaun Watson. The former Longhorn has struggled to stay healthy this season but is helping out on defense so far in the playoffs.

End of the road for four Longhorns

Michael Dickson capped his excellent rookie season, in which he was named All Pro, with a strong performance. He had seven punts go for an average of 51.4 yards. His long went 60 yards and he landed one inside the 20. Unfortunately for him and the Seahawks his onside kick attempt late in the game didn’t come off the way he’d like.

D’Onta Foreman, a second-year running back, had just one carry for three yards in the Texans’ 21-7 loss to the Colts.

Justin Tucker had a rough day for the Ravens, missing a field goal that he normally makes. The 50-yard miss came late in the third quarter. Tucker did make a 33-yarder and connected on both of his extra-point attempts.

Did Not Play/Inactive Longhorns in the NFL