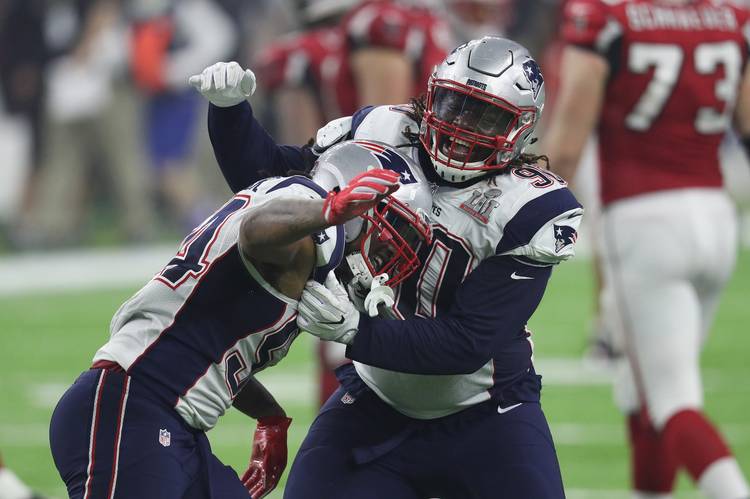 Dont'a Hightower #54 of the New England Patriots celebrates with Malcom Brown #90 after forcing a fumble from Matt Ryan #2 of the Atlanta Falcons during the fourth quarter during Super Bowl 51 at NRG Stadium on February 5, 2017 in Houston, Texas. (Photo by Patrick Smith/Getty Images)

Is there such a thing as a former Longhorn? These players will always be Longhorns to University of Texas fans, even though they’ve graduated to the next level of football. Every week we’ll update you on how they performed the previous weekend. Here’s a look at the Longhorns in the NFL and how they fared in the conference championships.

Entering the conference championship week, it was already guaranteed that at least one of the teams that advanced to the Super Bowl would have a former Longhorn on their squad. As it turned out, both teams have a member that donned the burnt orange in college, making it 14 straight years that a Longhorn has played in the Super Bowl.

Malcom Brown and the New England Patriots will have another opportunity to win a Super Bowl after defeating Kansas City 37-31 on the road in overtime of the AFC Championship. Brown made two tackles as the Patriots held the Chiefs to just 41 yards rushing. The four-year defensive tackle would add a second Super Bowl Championship with a win against the Los Angeles Rams in Super Bowl LIII. Brown was in his second year with the Patriots when they made a furious comeback to defeat the Atlanta Falcons in Super Bowl LI.

Alex Okafor and the New Orleans Saints also went to overtime in their conference championship game, but they came up short against the L.A. Rams. Los Angeles won 26-23 to advance. Okafor made four tackles, one for loss, in the game.

As a result of the NFC title game, Malcolm Brown has an opportunity to win a Super Bowl ring. Though he’s on injured reserve, the four-year veteran running back played in 12 games and rushed for 212 yards for the Rams.