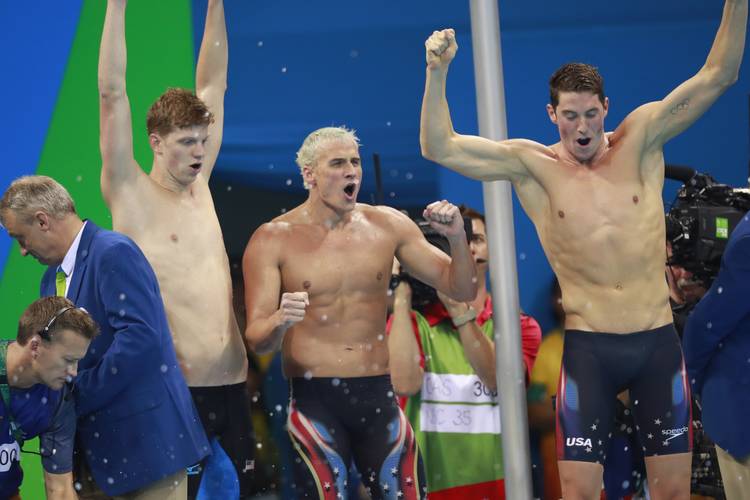 Haas, alongside Conor Dwyer, Ryan Lochte and Michael Phelps finished the final in 7 minutes, .66 seconds, more than two seconds faster than second place Great Britain (7:03.13). Japan finished in third with a time of 7:03.50.

The finish added to Phelps’ gold medal count, giving him 21 for his legendary career.

After Dwyer swam a 1:45.23 for the Americans in the first leg of the final, UT sophomore Haas turned in the best split time of the race in 1:44.14 to put Lochte and Phelps in good position to finish off the victory.

Earlier in the day, UT seniors Smith and Conger helped the relay team win their heat and qualify second in the event, behind Great Britain.

The Americans swam a 7:06.74 in the first heat, 0.43 seconds behind Great Britain’s qualifying time.

Tuesday marked the eighth consecutive Olympics in which at least one Texas men’s swimmer represented the United States in the 800-meter freestyle relay.

In earlier action, Joseph Schooling finished in eighth place for Singapore in the first heat of the men’s 100-meter freestyle semifinals. His time of 48.70 wasn’t good enough to qualify for the final.

Schooling qualified sixth for Tuesday’s semifinals earlier in the day with a time of 48.27. The Texas junior swimmer finished in second place of his heat, trailing Canada’s Santo Condorelli by 0.05 seconds.

Breakfast with Bevo, 8.10.16: Tracking the Longhorns in Rio