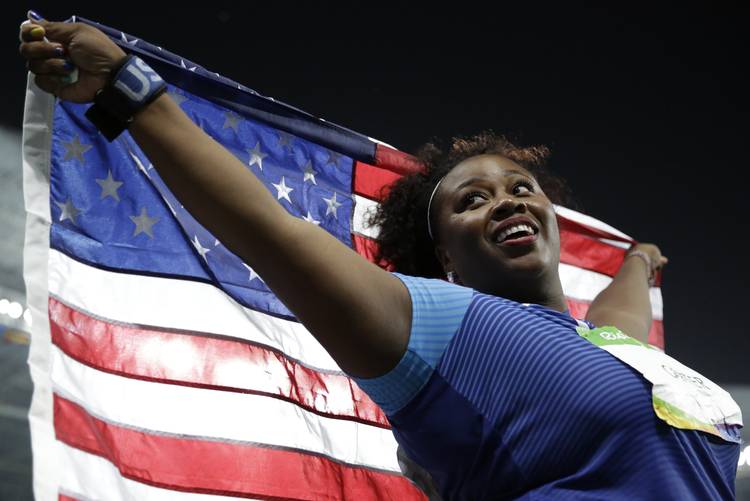 Seven current and former Longhorns competed at the Olympics in Rio de Janeiro on Friday, including current Longhorn Joseph Schooling who set an Olympic record on his way to defeating the greatest swimming champion of all time. He wasn’t the only Longhorn to win gold on the night as Michelle Carter took the gold medal in the women’s shot put.

The former Longhorn set an American record and became the first U.S. woman to win gold in the event. She’s also the  first U.S. athlete to medal in the same event as her father. Instead of earning a silver medal like Michael Carter did in the 1984 Olympics in Los Angeles, Michelle took home gold.

Carter’s throw of 67 feet, 10 1/4 inches on her sixth and final attempt bested that of New Zealand’s Valerie Adams, who threw the shot 66-11 3/4 inches on her second attempt. Adams was attempting to win the event for the third consecutive time.

Carter qualified third in the event with a throw measuring 62-4 1/4 inches. The American’s mark was more than two feet shy of top qualifier Adams.

Carter made her qualifying throw on her second attempt.

Men’s basketball: Former Texas Longhorn Kevin Durant had 12 points, five rebounds, an assist and a steal as the U.S. men’s basketball team held on to defeat Serbia 94-91 on Friday.

Bogdan Bogdanovic had a chance to tie the game late, but his 3-point attempt was off the mark, and Durant secured the rebound.

The three-point win is Team USA’s smallest margin of victory at the games in Rio. The U.S. improved to 4-0 in group play and will close out that portion of competition with a game against France at 12:15 p.m. Sunday. Team USA leads the Group A standings with eight points.

Durant had nine points by halftime, six of them coming from the free-throw line, just behind Kyrie Irving’s 11. The former Longhorn also played a team-high 30 minutes.

The quarterfinals will begin Wednesday.

Team USA already qualified for the quarterfinals by beating Serbia on Wednesday.

Adams had nine kills and a block in Friday’s match.

Golf: Brandon Stone shot a 72 in the second round Friday to remain tied for 51st place. Jhonattan Vegas had a tough round, shooting 76 on the day, to tie for 53rd place.

Stone moved up five spots in the standings and is at 1 over par.

The former Longhorns will return to action Saturday for the third round.