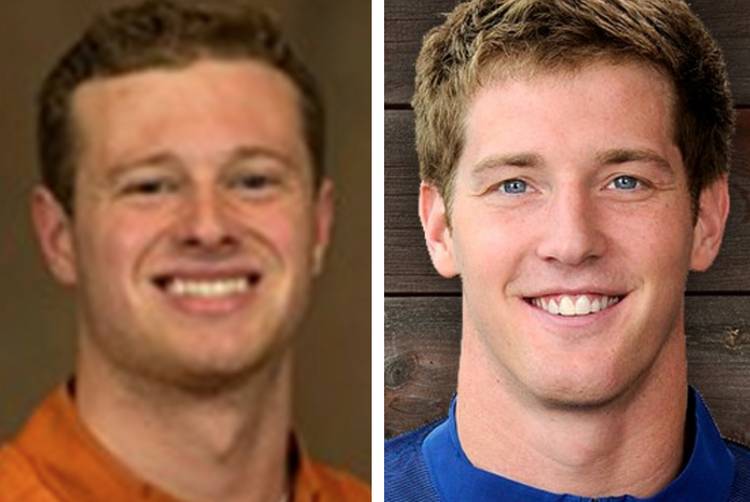 Feigen told USA Today: “I’m just trying to give Brazil what they need or what they want and get out of here. It’s a hassle. But I’m safe, everything’s fine.”

UPDATE: 8:40 p.m. _ Texas senior Jack Conger and Georgia junior Gunnar Bentz were removed from their flight and former Longhorn Jimmy Feigen did not show up for the flight Wednesday as they were trying to leave Rio.

NBC News reported that the flight was delayed so that Conger and Bentz could be taken off of it. The two were taken to the Rio police station. A member of the U.S. Consulate and an attorney were with them.

NBC said Feigen had checked in for the flight online, but did not show up at the airport.

The three are friends of Ryan Lochte, who told police they were robbed at gun point early Sunday by at least one individual posing as a policeman.

“We can confirm that Jack Conger and Gunnar Bentz were removed from their flight to the United States by Brazilian authorities,” USOC spokesman Patrick Sandusky said in a statement. “We are gathering further information.”

Lochte has been the center of attention and the only one of the four to give media interviews. He owns 12 Olympic medals. Lochte, however, left Brazil, Tuesday. He told NBC Wednesday night that he stands by what he told police.

Authorities in Rio have been questioning details of the story and a judge ordered Wednesday that the passports of Lochte and Feigen be confiscated so they could not leave the country.  In court documents, the judge wrote that Lochte and Feigen gave conflicting accounts.

Conger and Bentz had not met with police  before Wednesday.

Yahoo Sports reported that Conger and Bentz had cleared customs at the airport.

Rio police tried to talk to both Ryan Lochte and Jimmy Feigen again Wednesday, but could not find the two swimmers at the Olympic Athletes Village.

Earlier in the day, a judge signed a warrant allowing police to seize their passports. Feigen is a former Longhorn star who competed at UT from 2009-12. Lochte, a one-time star of his own reality show, probably is the most recognizable American male swimmer after Michael Phelps.

Patrick Sandusky, USOC chief external affairs officer, said in a statement to the media that all American swimmers had moved out of the village. The week-long swimming competition ended Saturday night.

“We will continue to cooperate with Brazilian authorities.”

The judge viewed security footage from the athletes village check in that showed Lochte and Feigen, along with Longhorn senior Jack Conger and Georgia’s Gunnar Bentz. She said there were discrepancies in the accounts provided to police by Lochte and Feigen and also noted that the swimmers, on security video, did not appear to be upset when they checked into the athletes villate early Sunday.

In addition, CNN is reporting that a judge has ordered a search and seizure warrant, requesting the passports of two swimmers, including Jimmy Feigen, one of the Longhorns,

Jack Conger, who will be a senior at Texas, and Feigen, a UT alum, were with swimming star Ryan Lochte and Gunnar Bentz.  Lochte said the four got into a taxi after leaving a large party in the French hospitality area. Lochte said they were stopped by who they believed to be police and held up at gun point.

A statement posted by Rio Justice tribunal, Judge Keyla Blanc De Cnop, of the Special Court of the Fan and Major Events, ordered search warrants for Ryan Lochte and Feigen and the seizure of their passports.

Lochte already has left Brazil. It’s unclear whether Feigen, who swam for Texas from 2009-12,  has returned to the United States. He’d been training in North Carolina for the Olympics.

According to a report by the Associated Press, police have not been able to find witnesses or the taxi driver. AP, quoting an unnamed police official familiar with the investigation, also said the swimmers failed to provide key details.

Also, the security video pulled from the athlete’s village showed the four check in early Sunday. There were cell phones and wallets evident. Such items would be of high value in a robbery.

Lochte’s attorney told the AP that his client has hired 24-hour security to protect him after the incident. Lochte is one of the more high profile athletes on the U.S. Olympic team. Conger and Feigen each won gold medals swimming relays.

“This happened the way he described it,” said Lochte’s lawyer, Jeff Ostrow said.

“Ryan was a hundred percent cooperative and fully available when they reached out to us for an interview,” Ostrow said. He added: “It doesn’t behoove Ryan and anyone else to make up a story.”

The swimmers did not call police after the incident. Rather, Rio police began investigating after they saw the news of the robbery make international headlines.

Hours after the incident, Lochte told The Today Show:

“And then the guy pulled out his gun, he cocked it, put it to my forehead and he said, ‘Get down,’ and I put my hands up, I was like ‘whatever.’ He took our money, he took my wallet — he left my cellphone, he left my credentials.”

U.S. Swimming media officials have not made Conger or Feigen available to the American-Statesman.  A UT spokesman could not be reached for comment.

Bentz posted on Twitter Sunday that the four were OK. And Lochte also posted a statement Sunday detailing what he said happened to the four.

Police have pulled security video of the athletes village. It shows the four returning at 6:56 a.m. Police also plan to look at security video from the party area and nearby gas stations so that they can establish a timeline.

Lochte told USA Today that the four didn’t immediately call police because they were afraid they’d get in trouble.

For several hours Sunday, there were conflicting reports as to whether the incident happened. USA Swimming issued a statement Sunday afternoon to confirm it.

The AP reported that fake police stops do happen in Rio. But they are more common in the poorer spots outside the city where there are fewer police.

Police also say that many street crimes aren’t even reported.

Lochte and Feigen are friends and trained together for the Olympics. The two also colored their hair for the games.

Got to spend a few hours with these babes yesterday. Thanks for trusting me with your Olympic hair @ryanlochte and @jimmyfeigen. Now go win some gold medals!!!! #teamusa #usaswimming #rioolympics #rioolympics2016 #jennjoneshair #organichaircolor #bluehair #oway #bestcoloristatlanta

Longhorns in the Olympics: Day 11