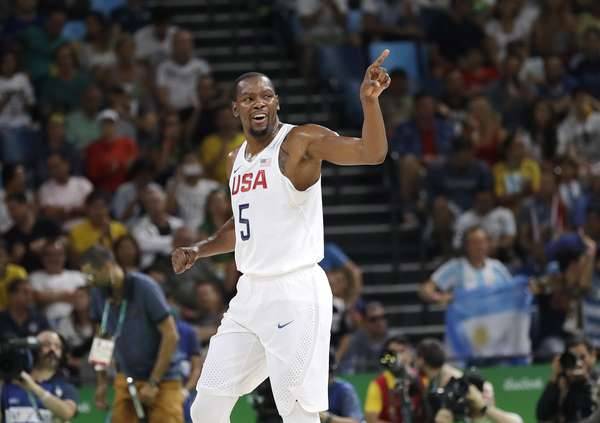 United States' Kevin Durant (5) signals to teammates after he scored against Argentina during a men's quarterfinal round basketball game at the 2016 Summer Olympics in Rio de Janeiro, Brazil, Wednesday, Aug. 17, 2016. (AP Photo/Eric Gay)

Kevin Durant scored 27 points as Team USA put an end to a streak of close games, defeating Argentina 105-78 at the Olympics in the quarterfinals on Wednesday.

The Americans had a slow start but utilized a 27-2 first half run to take full control of the game.

They’re set to face Spain on Friday while Australia takes on Serbia in the other semifinal.

Durant starred for Team USA, going 9 of 13, including 7 of 9 from 3-point range. He pulled down seven rebounds, made a steal and dished out six assists in the game. He even made his teammates go wild on the bench with his crossover and Euro step in the second quarter.

Durant hit a 3-pointer early in the second quarter that helped the Americans start the period on an 11-0 run.

“We fed off wanting to play better than the last three games,” Durant told the Associated Press.

Durant and his teammates certainly did that. They’ll face Spain Friday, a team they defeated in the Gold medal final in the last two Olympics.