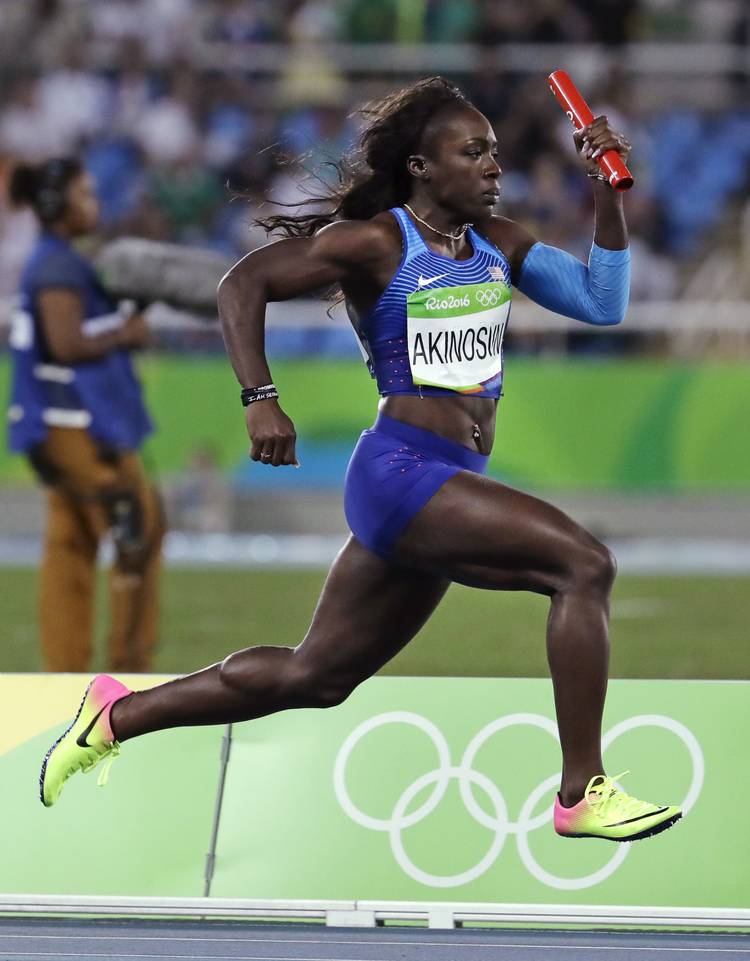 United States' Morolake Akinosun runs the last leg in a women's 4x100-meter relay rerun after dropping the baton in the race in the morning during the athletics competitions of the 2016 Summer Olympics at the Olympic stadium in Rio de Janeiro, Brazil, Thursday, Aug. 18, 2016. (AP Photo/Dmitri Lovetsky)

Morolake Akinosun, a Team USA sprinter who just completed her senior season at UT, anchored the women’s 400-meter relay team to a time of 41.77 seconds at the Olympics in Rio de Janeiro on Thursday. The sprinters had to complete a re-run after they won an appeal as a result of the morning race.

Allyson Felix was bumped by the Brazilian team as she tried to make an exchange with English Gardner in the morning’s race. Team USA dropped the baton and completed the race before filing a protest.

Brazil was subsequently disqualified and Team USA was allowed to run a race on its own in lane 2 to start the evening session at Olympic Stadium.

Tianna Bartoletta, Felix, Gardner and Akinosun just had to beat 47.20 seconds to qualify for Friday’s final. They qualified in the top spot.

In the women’s 400-meter hurdles final, former Longhorn Ashley Spencer took the bronze medal with a personal best time of 53.72. Her U.S. teammate Dalilah Muhammad took the gold medal in 53.13 while Sara Slott Peterson of Denmark won silver in 53.55.

Spencer made the final in dramatic fashion as she recovered from a stumble in the semifinal to win her heat in 54.87 seconds.

The bronze won by Spencer is the second medal won by a Longhorn in the event. Melaine Walker won the gold medal in 2008 for Jamaica in China.

Muhammad and Spencer give Team USA two medalists in the women’s 400-meter hurdles for the first time since the 1996 games in Atlanta.

Crouser advanced to the men’s shot put final on the strength of one throw in Thursday’s morning track and field session.

Crouser’s throw of 70 feet, 10 inches made him an automatic qualifier for Thursday night’s final. It was the top-ranked throw in the qualifying round. Tomas Walsh of New Zealand was the closest competitor with a throw of 69 feet.

Adams accounted for 14 points for Team USA in the semifinal loss.

The United States will play either the Netherlands or China for the bronze medal on Saturday at 11 a.m.

What people are saying about #LochteGate