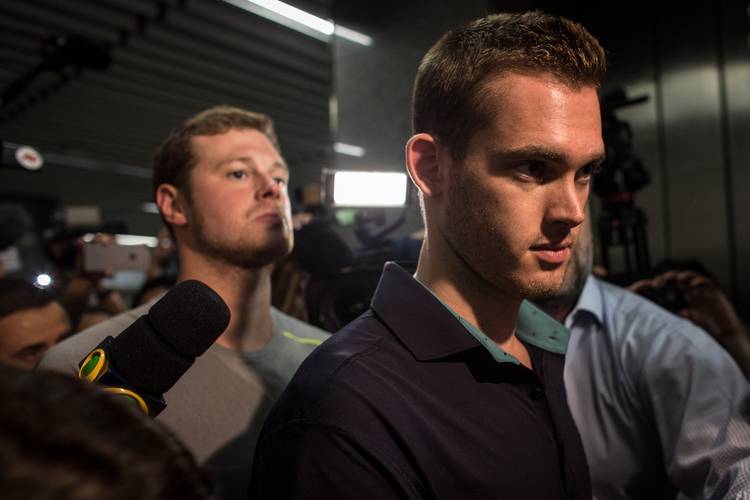 U.S Olympic swimmers Gunnar Bentz (R) and Jack Conger leave the police headquarters at International departures of Rio de Janiero's Galeo International airport on August 18, 2016 in Rio de Janiero, Brazil. The swimmers were removed from their flight departing for the United States by Brazilian authorities to give more information about a reported armed robbery earlier in the week which included fellow U.S swimmers Ryan Lochte and James Feign. (Photo by Chris McGrath/Getty Images)

UPDATE: Texas senior Jack Conger is on his way back to the United States and the the U.S. Olympic Committee is working to get Rio police to return the passport of former Longhorn Jimmy Feigen.

In a statement to the media, USOC chief executive officer Scott Blackmun said that Feigen revised a statement he initially provided police on Sunday.

Blackmun issued an apology and provided more details on what happened to Feigen, Conger, Ryan Lochte and Gunnar Bentz during an altercation at a Rio gas station early Sunday after the four Olympians left a party.

“The behavior of these athletes is not acceptable nor does it represent the values of Team USA or the conduct of the vast majority of its members. We will further review the matter and any potential consequences of the athletes when we return to the United States.

On behalf of the United States Olympic Committee we apologize to our hosts in Rio and to the people of Brazil for this distracting ordeal in the midst of what rightly should be a celebration of excellence.”

Bentz, a junior at Georgia, also was allowed to leave. Lochte, who intially told police and several media outlets that the four were robbed at gun point, flew home, Tuesday, before a judge ordered that his passport be seized.

“The last five days have been difficult for our USA Swimming and United States Olympic families. While we are thankful our athletes are safe, we do not condone the lapse in judgement and conduct that led us to this point. It is not representative of what is expected as Olympians, as Americans, as swimmers and as individuals.”

UPDATE: Texas senior Jack Conger and Georgia junior Gunnar Bentz checked in for a flight back to the United States late Thursday after giving statements to police earlier in the day.

It’s unclear whether Jimmy Feigen, a former Longhorn, has been allowed to return.

CNN and the Associated Press confirmed that Conger and Bentz were at the airport. The two were taken off a plane Wednesday night so that they could provide statements to the police.

AP reporters saw Conger and Bentz at the airport and said they were whisked through security and not forced to wait in line.

The BBC, quoting the lawyer of Conger and Bentz, said the two were cleared to leave.

UPDATE: Despite reports saying otherwise, NBC News, which is on site in Rio, says Ryan Lochte and Jimmy Feigen have not been indicted.

Rio Police spokesperson says that US swimmers Ryan Lochte and Jimmy Feigen have not been indicted, despite reports – (corrects name)

ABC News had reported that Lochte and Feigen, a former Longhorn, have been indicted for providing a false report to police,.

The Rio police chief said earlier in the day that the two Olympic swimmers likely would have to pay a fine.

However, CNN, quoting sources close to Lochte, say that three minutes of a security video from the gas station are missing. CNN reported that Lochte and the swimmers still believe they were robbed. The report said that the swimmers were asked to leave their taxi and told to give a security guard all their money.

He said: “In theory, one or all of them might be charged for false communication of a crime and for damaging private assets, the gas station. I’m not saying that they are charged right now because of that. We have to finalize the investigation and in theory that could be the case. This is not really a — this kind of crime will not lead to their arrest.”

Veloso said Ryan Lochte was confrontational with the security guard at the gas station. The guard did point a gun at Lochte. Veloso said of Lochte that he was  “very angry because he was intoxicated.”

A Texas spokesman said that athletic director Mike Perrin has been in touch with Conger’s family and that “we’re monitoring the situation. We’ll continue to gather facts and follow the process.”

EARLIER: The Associated Press is reporting that Longhorn swimmer Jack Conger has told police that fellow Olympian Ryan Lochte made up the robbery story.

AP quoted an unnamed source saying that Lochte, Conger, Bentz and former Longhorn Jimmy Feigen took a taxi to leave a party and go back to the athletes village early Sunday. They stopped at a gas station in Barra da Tijuca, a Rio suburb where many of the Olympic venues are located, at about 6 a.m.. One of the swimmers was trying to open a bathroom door, but it was locked.

The swimmers pushed on the door, which broke it. They were then confronted by a security guard, who was armed, but never drew his gun. The gas station manager arrived and asked for the swimmers to pay for the damages. Another customer translated.  The swimmers paid and left.

They checked into the athletes village at 6:56 a.m.

But there are conflicting reports as to what happened after the bathroom door was broken.

“According to the security, the swimmers were aggressive, altered and clearly drunk.”

The site said that a security officer showed his badge.  Two of the swimmers ran into the street and the guard, likely a policeman moonlighting as security, pointed a gun at the other two. The site said the swimmers offered $20 and 100 Brazilian real to fix the damage.

Lochte has been the only one of the four to speak publicly about the alleged robbery. He left Rio, Tuesday.

Conger and Bentz tried to leave Wednesday night, but were detained at the airport. Feigen checked in for the flight, online, but did not go to the airport.

IOC spokesman Mario Andrada, in his daily briefing with the media, said: “Let’s give these kids a break. They had fun. They made a mistake. Life goes on.”

A Texas spokesman, when reached by the American-Statesman, deferred comment to the USOC.  Texas coach Eddie Reese, who had been in Rio, was on vacation and unavailable for comment.

It’s not the first time a Longhorn Olympian has caused an international incident while out celebrating. Back in 1988 at the games in Seoul, UT star Doug Gjertsen and Olympic teammate Troy Dalbey were arrested by South Korean police after the two stole a small marble statue of a lion’s head from a hotel bar.  The statue was worth about $850.

Charges were never filed and the two were allowed to leave Seoul. Gjertsen and Dalbey, in a joint statement, apologized for embarrassing their teammates, family and country.

ABC News is reporting that the robbery story told by Ryan Lochte that also involved two Olympic swimmers with Longhorn ties was fabricated.

The Daily Mail said that security video shows that the four swimmers trashed a gas station bathroom after one broke down the door. The Mail said the video shows a security guard pulling a gun on the group and asking for someone to pay for the damages.

The swimmers paid the guard money and left.

The newspaper quoted a police source who said: ‘They stopped at a gas station and they were all really drunk. They went to the toilet and damaged it pretty badly.

‘The security guy saw them and started arguing with them – telling them they had to pay. They refused and argued back. He pointed his gun at them and insisted they pay for the damage – they gave him some money and left.’

Police have viewed security video of a gas station where the alleged robbery happened. The footage shows a swimmer breaking down the door of a bathroom and fighting with a security guard.

The identity of the swimmer has yet to be revealed.

Lochte and swimmers Jack Conger, Jimmy Feigen and Gunnar Bentz were together early Sunday at a large party held in the French hospitality area.

On Sunday Lochte told NBC that the four had been robbed at gun point by an individual posing as a policeman.

Conger and Bentz were not allowed to leave the country last night. Police pulled them from their flight back in the United States.

Up until late Wednesday, only Lochte and Feigen had talked to the police about the incident that was alleged to have happened four days before.

Lochte, one of the most recognizable swimmers in the world, left Rio Tuesday. He was the first to speak to police.

On Wednesday a Rio judge ordered that police confiscate the passports of Lochte and Feigen.

Feigen did not show up for his flight Wednesday night, but told USA Today he was cooperating with authorities.

Conger and Bentz, who will be a junior at Georgia, were questioned late Wednesday. It was the first time they’d spoken to police.

The story began to break Sunday. It was born on social media. The International Olympic Committee denied it, but Lochte’s mother told USA Today and Fox Sports Australia that her son and three others were robbed at gun point.

“And then the guy pulled out his gun, he cocked it, put it to my forehead and he said: ‘Get down,’ and I put my hands up, I was like ‘Whatever.’ He took our money, he took my wallet. He left my cell phone, he left my credentials.”

U.S. Swimming issued a statement later on Sunday confirming that the athletes were involved in a robbery.