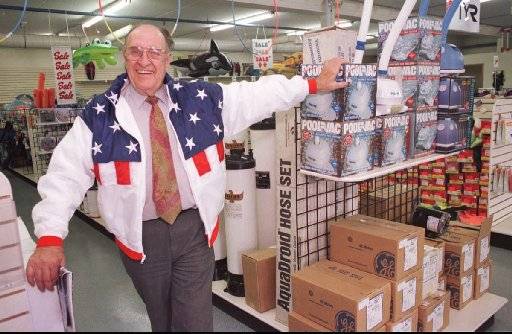 Former Texas Longhorn Adolph Kiefer, who won gold in the 1936 Olympics in Berlin and initiated programs that taught thousands how to swim, died Friday at his home in Illinois. He was 98.

He had been the oldest living American Olympic champion and he was the first Longhorn swimmer to earn a coveted gold.

As a 17-year-old and the son of German immigrants, Kiefer became an American sporting hero when he won the 100-meter backstroke in the Olympics.

Adolph Hitler came to the pool to meet swimmers. He shook Kiefer’s hand.

When he was 95, Kiefer told the Chicago Tribune of his meeting with Hitler: “I should have thrown him in the pool and drowned him. It would have saved a lot of lives.”

He swam at Texas under legendary coach Tex Robertson, helping the Longhorns to the 1939 Southwest Conference championship.

Kiefer served in the U.S. Navy in World War II and was in charge of the program that taught 13,000 sailors and officers how to swim and do the “victory backstroke.” The American Red Cross eventually added Kiefer’s version of the backstroke to its training standards.

His business, which was based in Chicago, built safety and training equipment. It also developed the first nylon swim suits, which were worn by the U.S. Olympic team. Kiefer helped build public pools in Chicago and helped many learn how to swim.

In 1965, Kiefer was a member of the first class inducted into the International Swimming Hall of Fame.

He was inducted into the UT Hall of Honor in 1982.

Here’s an interview Kiefer did with Mike Cramer, director of the Texas Program for Sports in Media