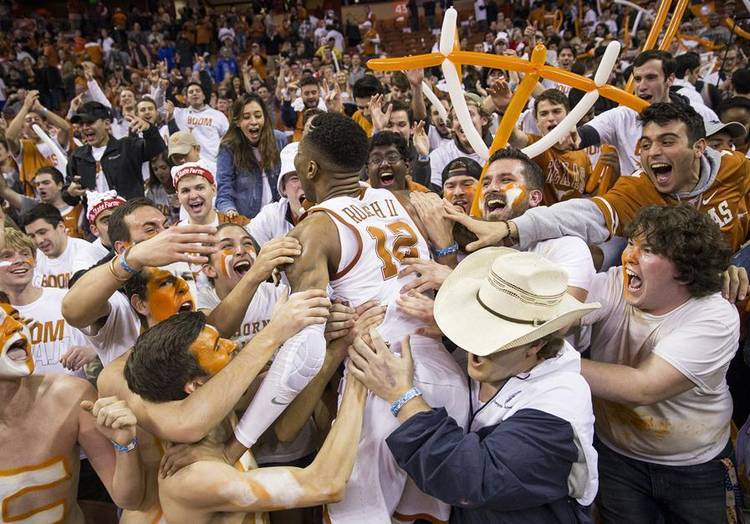 The Texas men’s basketball team pulled a win over Oklahoma Saturday afternoon, beating the Sooners 79-74 in front of a lively crowd at the Frank Erwin Center.

Unfortunately for some Longhorn fans, they were left out in the cold.

To sit in the student sections at athletic events, UT students must purchase “The Big Ticket.” This ticket includes a reserved football season ticket in the fall and access to all other sporting events. But according to Texas Sports, “seating for all other sports besides football is general admission on a first-come, first-served basis.” The Frank Erwin Center’s capacity for basketball games is reported to be 16,540, with the overwhelming majority of seats going to non-students.

ESPN’s College Gameday traveled to Austin Saturday morning and administrators encouraged students to show up early and cheer for the Longhorns. About 3,000 fans turned out, far exceeding the station’s expectations for the crowd. That afternoon, the women’s basketball team beat TCU. But with so many people at the Frank Erwin Center for both events, capacity for students showing up for the men’s game in the late afternoon was limited.

Texas fans were not pleased with the availability of seating at the Frank Erwin Center for students and posted their frustrations on Twitter. Photos show sections reserved for recruits and crowds of fans waiting outside the arena.

It took venue staff nearly an hour to communicate to us that there was no point in waiting.

There is absolutely no reason why Big Ticket holders should be waiting outside the Frank Erwin Center to get into basketball games that their money pays for @_delconte pic.twitter.com/uQrwEJQTHC

Reserving seats for recruits isn't a problem having two tiny student sections and sending the rest to the upper deck is.

@_delconte pleaseeee let us in, we’re just trying to pack the drum pic.twitter.com/Ubt8y3mVGZ

@TexasMBB @TexasSports @_delconte can you please elaborate? I know it’s to show how amazing the school is to recruits but really?!? People stand in line for hours & run to get seats only to be told there aren’t any. Even the ushers were confused as to where we can and can’t sit

@_delconte Imagine the atmosphere @TexasMBB would have if all of these students could sit in the lower bowl.🤘 pic.twitter.com/KYkZhRRCgT

Athletic director Chris Del Conte addressed some concerns on Twitter, including retweeting a post about The Big Ticket.

Hi Ben – I hear you and thank you for coming out and supporting your team… however, its my understanding the seats in question are usually held for recruits and if not a big recruiting weekend are released to the students.. will find out 👊🏽🤘🏽 https://t.co/FYxaUIyYMn

Sorry about that … packed house was and all those with tickets showed hence no empty inventory https://t.co/BPULDGAU1P

Amaya – those who attended game-day plus the women’s game were given priority for tonight’s game.. Crowd and turnout for both was amazing.. 👊🏽 https://t.co/4AWFW11ZSQ

Big ticket gives you opportunity to get into game but a sellout is a sellout. I too had to watch game on TV. Hook'em.

Texas officials announced last year that the Frank Erwin Center would be replaced with a new arena on campus. The American-Statesman reported the new arena will be “smaller and more intimate than the Erwin Center,” according to documents released by UT.