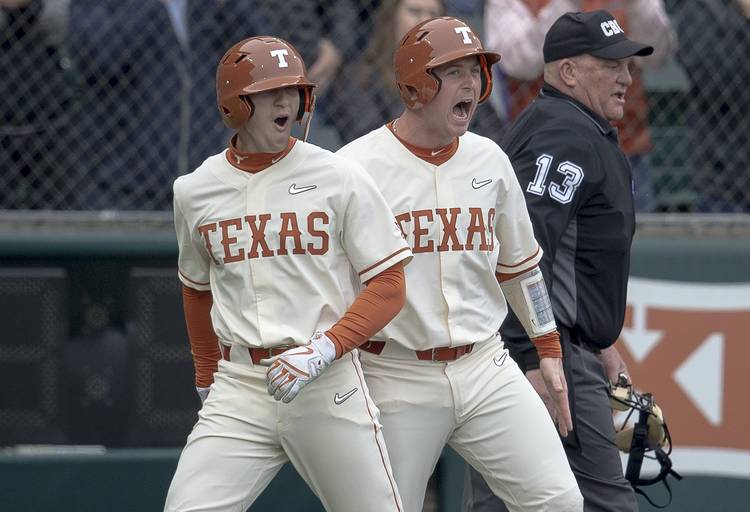 Boosted by an early outburst from its offense, No. 22 Texas earned its second straight win over No. 2 LSU on Saturday.

Texas and LSU kept the scoreboard operator at UFCU Disch-Falk Field busy as they combined to score 11 runs during the second and third innings. Eight of those runs belonged to the Longhorns. UT plated a half-dozen of its runners in the second session.

UT has registered 16 runs and 17 hits over the first two games of this series.

Longhorn pitcher Blair Henley improved to 2-0 in this career against LSU. Last year, Henley threw six shutout innings in an 11-1 victory in Baton Rouge. During Saturday’s six-inning outing, the junior right-hander struck out six while giving up five hits and three earned runs.

Texas gets a tailormade double-play ball, but the throw from second to first isn't accurate. LSU scores one on the play as a result of the ball getting away from Shaw.

The defensive woes for Texas continued on Saturday as two errors were credited to the Longhorns. Texas has committed 19 errors over its 12 games, and eight of those miscues have been made over the team’s last three contests. Over David Pierce’s first two years at Texas, the Longhorns averaged 0.77 errors per game.

NOTABLE NUMBER: 6. For the sixth time in 11 attempts, outfielder Duke Ellis got aboard in the first inning as UT’s leadoff hitter (two hits, four walks). Ellis has also accomplished that achievement in each of his last four starts. Over last year’s 65 games, the leadoff hitters for Texas reached base on 25 occasions.

UP NEXT:  The Longhorns and Tigers will close out their three-game series on Sunday afternoon. Texas expects to start RHP Coy Cobb (0-1; 2.61 ERA) against LSU RHP Eric Walker (1-0; 4.50). This past Monday, Cobb was named the Big 12’s newcomer of the week.